Share All sharing options for: Blackhawks and Predators - Series Review

Over the next several months, I'm going to be collecting scoring chances for all of the games in the 2009-10 playoffs so that we'll have a complete set of chances from one set of eyes, which should help folks to do some analysis.  Today is the first installment in which I'll be reviewing the first round series between the Blackhawks and Predators.  Once the playoffs were over there were many people who said that the Predators were the toughest series for Chicago.  In one sense, that's true.  No other team was less than a minute away from going up 3-2 in the series, so clearly, the Blackhawks were in some trouble here.  After the jump, we'll look at the scoring chances to see if the Predators were really outplaying the Hawks over the course of the series.

For those who'd like a definition: a scoring chance is defined as a clear play directed toward the opposing net from a dangerous scoring area - loosely defined as the top of the circle in and inside the faceoff dots, though sometimes slightly more generous than that depending on the amount of immediately-preceding puck movement or screens in front of the net.  Blocked shots are generally not included but missed shots are.  A player is awarded a scoring chance anytime he is on the ice and someone from either team has a chance to score.  He is awarded a "chance for" if someone on his team has a chance to score and a "chance against" if the opposing team has a chance to score.  Finally, a big thanks to Vic Ferrari for making the whole damn thing possible with his awesome scripts.

I do have a file on each individual game too, so if anyone would like a copy of those, just send me an email, and I'll pass those along.  It's worth noting that the Hawks owned 55% of the chances overall, which is a pretty hefty margin, and were only outchanced in one of the six games.  The Predators may have taken Chicago closer to elimination than any other team, but they definitely didn't outplay the Stanley Cup champs.  On the scoreboard, the Predators got a lot of "timely" scoring in the third period, but despite the 7-3 advantage in goals they were still outchanced.  Another big problem was Nashville's power play, which allowed the Blackhawks to generate far too many chances, and may have cost them the series when Patrick Kane tied Game Five late in the third period while shorthanded. 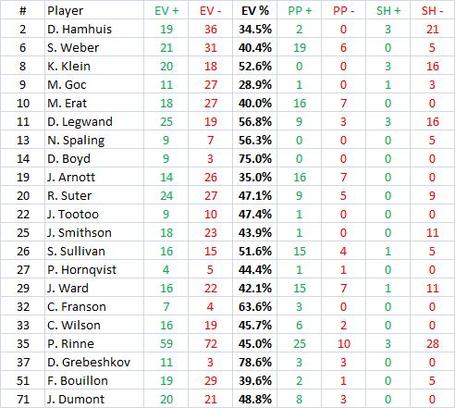 The big surprise for me is just how badly Nashville's stars got outchanced in the series.  Dan Hamhuis in particular looked terrible against some of Chicago's better forwards.  There was more than one occasion where he was completely undressed off the rush, and he had a horrible time getting the puck out of his own zone.  The decision to let Hamhuis walk (to Vancouver) was definitely a good one if his play in this series is representative of what he's capable of against the NHL's best.  On the other side, we've got Denis Grebeshkov who was only able to play in the last two games of the series, and generated a tonne of offense against Chicago's lesser lights.  In Game Five he made two jaw-dropping passes that lead to Nashville goals, and in general, he was just a fine guy to watch.  I still can't believe he's going to spend the next couple of seasons in Russia.

Many of Nashville's top forwards also struggled mightily.  Jason Arnott, Joel Ward, and Martin Erat were all had a very tough time, and surprise outscorers like Marcel Goc were surprising at the other end of the spectrum in the playoffs.  The only consistent exception up front was the underappreciated David Legwand who had a great series at both ends of the ice.  Legwand is often looked at as a disappointment, and maybe he is for a second overall pick, but he's still a helluva player. 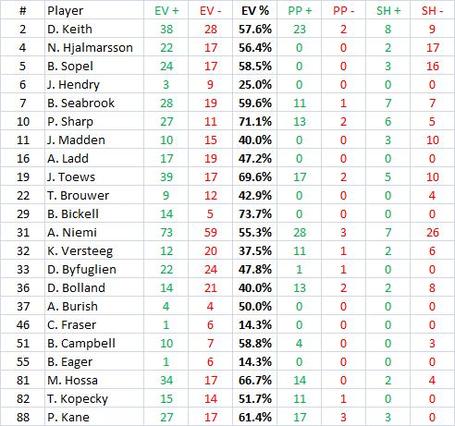 It's interesting to me that despite all of the losses Chicago has had this season, only one player who posted a positive chance differential at EV in this series is gone (Brent Sopel, the 5th defenseman).  Chicago's big guns came out to play and they were absolutely dominant.  Jonathan Toews, Patrick Sharp, Marian Hossa, and Patrick Kane all earned over 60% of the chances while they were on the ice at EV, and that was often against a darn good top four on defense and some pretty competent forwards.  It's amazing to look at Patrick Kane getting 61.4% of the chances and thinking, "That guy's not driving the bus".

Chicago's top five defenders were also fantastic.  The lowest on the totem pole was Niklas Hjalmarsson with 56.4% at EV, which should tell you something about the depth guys.  Both Dustin Byfgulien (who started the series on the blueline alongside Duncan Keith) and Jordan Hendry were outchanced significantly whenever they got out there (the partner tended not to matter).  It's my view that the Hawks' struggles so far this year probably have more to do with the lack of depth on defense than it does with the forwards who've left.  Chicago now has only four reliable defenders, and when one goes down (as Brian Campbell did early on in the season), they've got a poor player taking big minutes.  If this team is looking for a fix, the blueline may well be the place to look.