Share All sharing options for: Oilers vs. Flames - More Analysis

There was a bit of talk in various post-games about the matching of Gagner against Jokinen, but if it happened, it was incidental or Calgary was making it happen.  Using Vic's shift chart tool and pulling the players into order, we can see that Scott was right in the game thread when he observed that the Alberta Waltz was in effect.  Tom Renney was rolling them over the boards and kept trying to do it all night long, both forwards and defenders.  I'm not sure if that's going to be his modus operandi all season, but he was at it against the Flames.  Here's a screen shot of the first snippet of the game, but the pattern persists throughout, interrupted by special teams play:

The progression is obvious from the smaller view, with the lines and pairings changing down and to the right.  Renney had no problems putting Horc, Clutch and the Cannonball out for a defensive zone shift early in the game, and even Fraser's line was taking d-zone faceoffs.

The first period was insanely lop-sided; Dennis' scoring chances show the Oilers getting the first nine even strength scoring chances of the game and Calgary only had one in the entire first-period, which came short-handed.

Next up is the Head-to-Head Scoring Chances from the game: 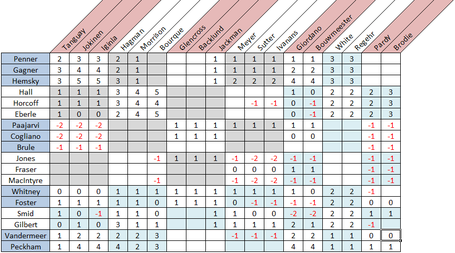 The concern for Flames' fans coming in centered around their depth forwards, but it was their top six (and I realize Morrison is not a top six player, probably not a top eight player at this point), along with their top two pairings that were drilled in this one.

Here are some shots of Regehr not realizing he's just not good enough for this game:

He approaches Dustin Penner like he's going to board Ales Hemsky or something: 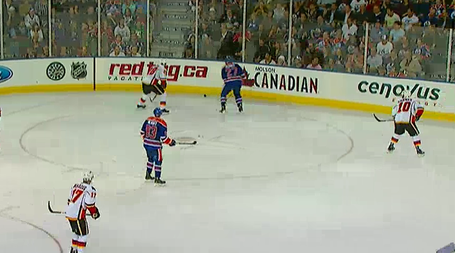 Penner steadies himself for the impact: 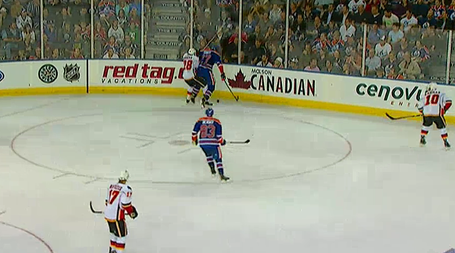 And down he goes in a crumpled heap: 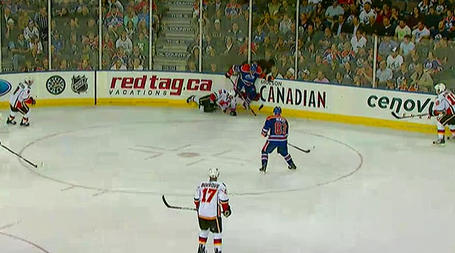 Lastly, I watched this game again on DVR and found the NHL turnover stats somewhat confusing.  They've got the Flames down for twelve turnovers, but when I counted, I had the defense down for fourteen turnovers by themselves.  Does anyone know what the criteria is for counting turnovers as the responsibility of a particular player?