Oilers Penalty Kill Can Learn From The Barons

Share All sharing options for: Oilers Penalty Kill Can Learn From The Barons

The new-look Edmonton penalty kill has looked brutal in the early going, surrendering a league-worst thirteen short-handed goals with an efficiency rating of only 70%.  We looked at the positional problems that have arisen because of the tactics currently employed by the Oilers, and determined that poor coaching was the most likely culprit for the Oilers' new chasing style.  On the opposite end of the spectrum we have the Oklahoma City Barons.  The Barons lead the AHL in penalty killing efficiency and had a streak of more than thirty kills in a row to begin the season.  After the jump, we'll look at the tactics being employed by Oklahoma City's head coach, Todd Nelson.

The following screencaps were taken from the CBC broadcast of the game between the Oklahoma City Barons and the Hamilton Bulldogs at Copps Coliseum on October 24th.

In the first set of screencaps, the Bulldogs enter the zone on the right defensive half of the ice and both Barons' defensemen engage the puck carrier. 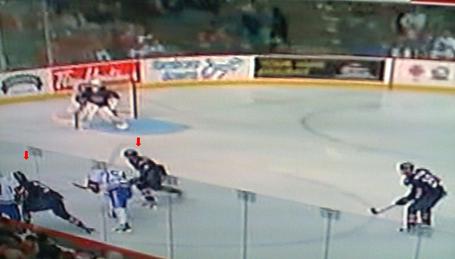 Alex Plante immediately recognizes Taylor Chorney is also pursuing the puck and peels off to the net. 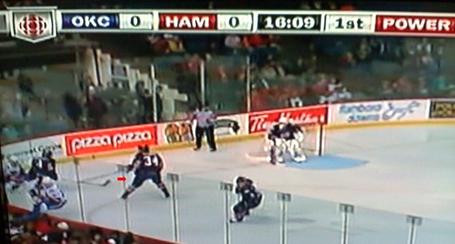 When we looked at the Oilers' penalty kill we saw defensemen being trapped in the same corner. The Barons are either coached differently, or have better recognition.

Here's a second example of the Barons' system outdoing the Oilers' system.  The Bulldogs' Ben Maxwell carries the puck into the zone on the right-hand side.  He's engaged by Jeff Petry. 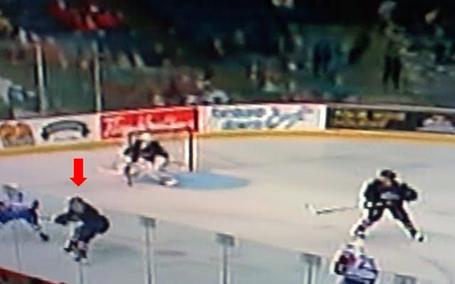 As Maxwell goes behind the net, Petry lets him go and he's picked up on the other side by Alex Plante who chases him to the corner. 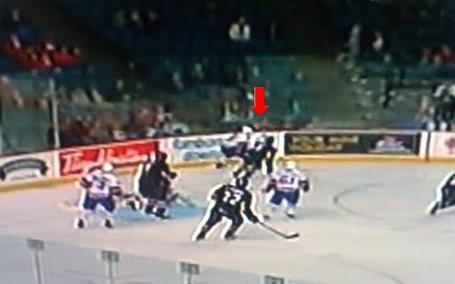 With the Oilers, we saw the defenseman chase the puck carrier behind the net, exposing a quarter of the zone as well as the passing lane through the middle of the slot.  The Barons' system has the defense pass off the responsibility for covering the puck carrier as he moves from one side of the ice to the other.

We saw examples of the Oilers' inability to play a simple box and diamond on the penalty kill.  The Oilers were flattening the box and chasing the puck to the corners, which left the forwards to cover an enormous amount of ice.  The Oilers' defensemen have been chasing the puck up to the point and exposing the other three penalty killers.  The Barons, even when players shift, have no such problems.

First up is a picture of the Barons in their box on the penalty kill.  The puck is at the right point and the Bulldogs have three men high. 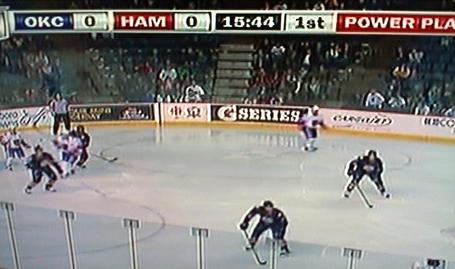 A Bulldog flashes to the high slot and the Barons' forward follows him.  This leaves the left defensive point open.  Shawn Belle recognizes this and slides towards the circle. 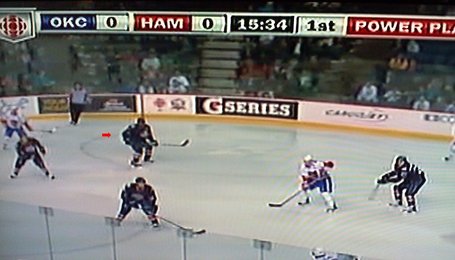 The pass is made and the defenseman moves for the back door pass and/or a rebound on the shot.  The high forward recognizes this and immediately slides down to the circle.  Belle is now facing the shooter in his shooting lane.  The Barons box morphs into a diamond, but they are still holding their positions. 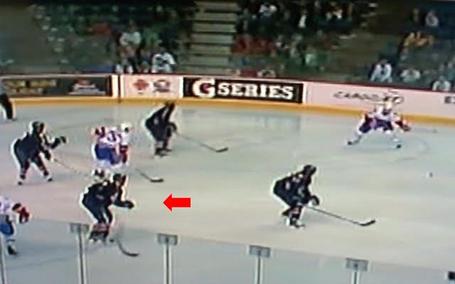 Belle's presence in the shooting lane forces the cross-ice pass, which is not going to lead to a scoring chance because the forward is now in the low slot.  Belle is at the point, the forward is low, and the Barons have maintained the box after shifting out of the diamond. 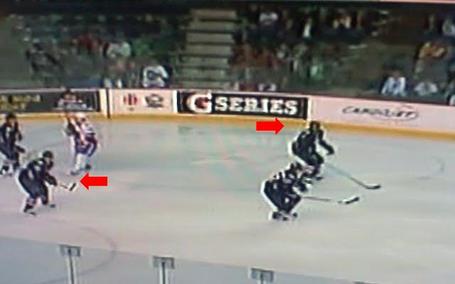 The last big difference in the two penalty kills is positioning when the puck is down low. The scenario in the next picture is similar to one that we saw in the Edmonton penalty kill review. 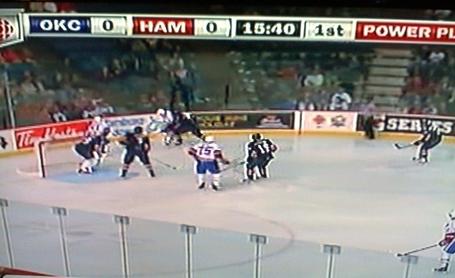 Rather than players in a jailbreak, the Barons have maintained the box formation, covering all of the passing lanes in front of the net.

The Barons' penalty kill is very well-coached and is tactically sound, while the Oilers are using a never-before-seen system with tactics guaranteed to expose the goaltender.  I'd like to understand why there is such a difference between the two systems, why different tactics are being used, and how it is that an AHL team is light years ahead of their NHL parent-club in these areas, but I doubt this is a question the people with access are going to ask.  Until something changes in Edmonton, the evidence seems to suggest that coaching is the main culprit behind the Oilers' 29th-ranked penalty kill.