One of the key aspects in the debate about playing so many rookies has been the Oilers' inability to soften the playing times for the rookies.  With so few legitimate NHL forwards on the team, there is no one to play the tough minutes, leaving the rookies exposed and targeted by opposing coaches.  One side of the debate feels that the school of hard knocks is a fine way to learn the NHL game, and that viewpoint is going to be tested throughout the year.

In the San Jose game, Joe Thornton played 10.5 minutes of even strength time, and Shawn Horcoff played against Thornton for 5.8 of them, mostly with Jordan Eberle and Magnus Paajarvi.  The shift chart shows the Sharks targeting the Horcoff line with Thornton.  It follows, then, that the worst individual Corsi numbers come from Horcoff, Eberle, and Paajarvi.  The scoring chances show the same story: 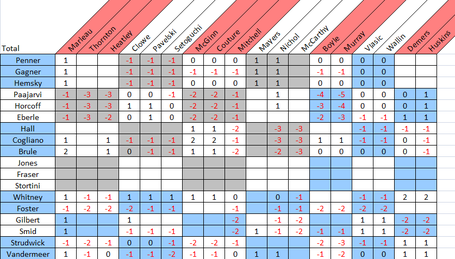 The Flames did the same thing as the Sharks.  Matt Stajan played 16.5 minutes of even strength time, mostly against Horcoff's line who played 10.8 minutes against Stajan.  Eberle and Paajarvi again played the majority of those minutes with the veteran centre.  Once again, those guys had the worst Corsi on the team.  The shift chart shows how the Flames targeted that line.  This time, the scoring chances were kinder to the Horcoff line: 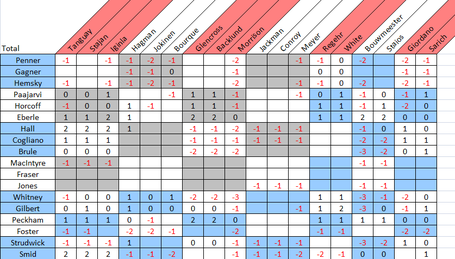 Blue Jackets coach Scott Arniel chose to target Andrew Cogliano as Rick Nash played 10.1 minutes of even strength time, 5 of them against Cogliano, and more against Taylor Hall and Gilbert Brule.  The worst Corsi of course belonged to Cogliano's line.  The scoring chances, however, evened out: 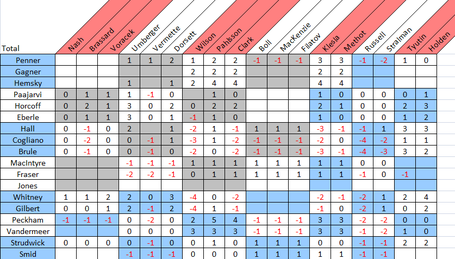 Tom Renney broke up the Dustin Penner - Sam Gagner - Ales Hemsky line against the Blackhawks, replacing Penner with Paajarvi.  Joel Quenneville took advantage and had Jonathan Toews out for 11+ minutes of his 16.7 total minutes of even strength ice time.  The Toews line got the best of the shots battle, and Gagner's line had the worst individual Corsi.  The top line was significantly outchanced as well: 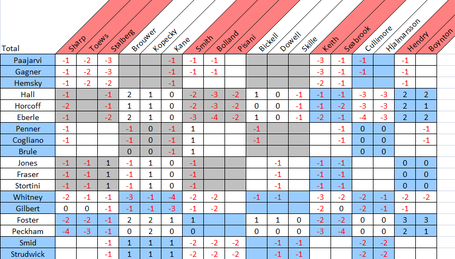 In June, when the concept of a kid line was being thrown around, Kent Wilson came up with a beautiful line:  "Opposing coaches would also target that line like a drunk chick at the prom."  It seems that opposing coaches don't need a line full of kids in order to target them - one or two is plenty.  With forward depth more than lacking, as long as Tom Renney continues his Rawhide line management, expect the rookies to see top line after top line for the rest of the season.