Share All sharing options for: Oilers vs. Flames, Preseason Game #6

Jeff Deslauriers and Devan Dubnyk are apparently going to be splitting the game tonight. Seriously, guys? What are you really going to learn about these two tonight that you don't already know? I don't know which guy is starting and, quite honestly (Renney!), I don't care. What we have here are two marginal goaltending prospects that have been in the organization for some time, and haven't had much success. Sure, Deslauriers was probably mismanaged to start his career, and yeah Dubnyk's only ever played for awful teams, but both of these guys have gotten quite a few reps and haven't exactly done much. My preference is Dubnyk, but that's based more on the fact that he has a better chance of improving than his probable performance this year. There has been some suggestion that the team will keep both. I'd rather they didn't. It was time to make a decision a long time ago, so let's get on with it! The whole situation reminds me a lot of this comic: 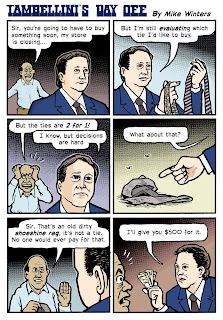 It just never gets old. And seriously, go to Chamber of Comics and read some more Mike Winters (Pair Bond is simply amazing). It's pretty much guaranteed to be more entertaining than whatever Sportsnet has going on during the intermission.

Some thoughts on tonight's game: