Share All sharing options for: Individual Point Percentage on the Power Play

Over the last couple of days I've been talking about individual point percentage (i.e. the number of times an individual player gets a point (either a goal or an assist) compared to the number of total goals scored while he's on the ice).  To this point, I've restricted the data to what's happening at even strength, so that we can get an idea about which forwards and defensemen are driving even strength offense.  After the jump, I'm going to use the same measurement to look at goals-scored on the power play.

First off, some parameters.  Once again, I'm only looking at players who played in a minimum of fifty games in each of the last three seasons.  In addition, these players must have averaged at least two minutes per game of 5-on-4 ice time.  I've again marked any large discrepancies from a player's three-year average in red (down year), or green (up year), and one thing you'll notice immediately is that there are more seasons like this than there was in the previously charts.  This is likely because, even with each player having a minimum of 100 minutes of 5-on-4 ice time, we're still dealing with a much smaller sample.  Another thing you'll notice is that the percentages are generally a bit lower for forwards and substantially higher for defensemen: the average forward had a three-year average IPP of 61.5% (compared to an average of 69.5% at EV), while defenders had a three-year average IPP of 53.3% (compared to an average of  28.8% at EV).  This isn't exactly news, but defensemen are much more involved in the offense on the PP than they are at EV.  Once again, the raw data I used for the calculations comes from Gabe Desjardins at Behind the Net (thanks Gabe!).  Here are the results for the forwards: 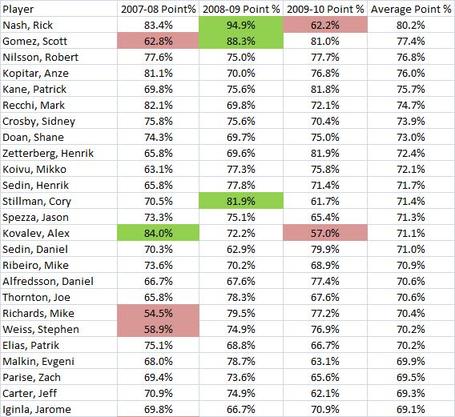 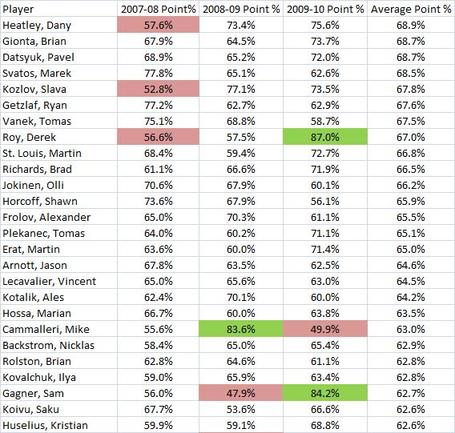 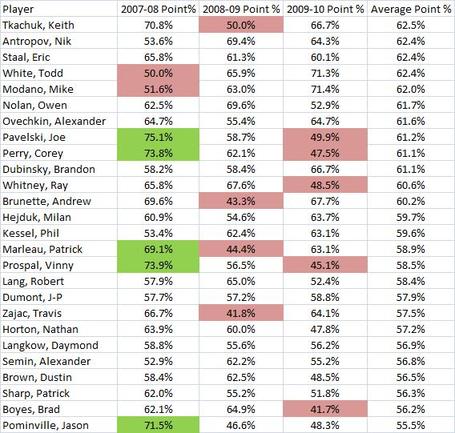 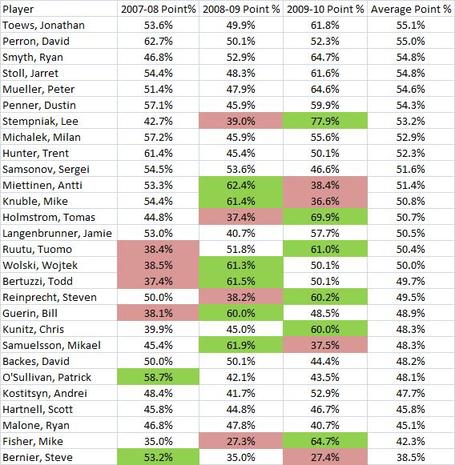 I think this is a very interesting list.  When you look at the bottom quarter, it still seems reasonable to suggest that the cream rises to the top to some degree, but many of the most potent power plays have a more diverse attack.  Last season, for example, the best power play was run by the Washington Capitals, and yet Washington's best players weren't always in on the offense when they were on the ice.  In fact, both Nicklas Backstrom (65.4%) and Alexander Ovechkin (64.7%).  In 2008-09 it was the Detroit Red Wings who lead the league, but once again two of their best players (Pavel Datsyuk at 65.2% and Marian Hossa at 60.0%) didn't stray all that far from league average (Henrik Zetterberg at 69.6% was quite high).  The Montreal Canadiens of 2007-08 break the trend here with their two top forwards showing well by this metric (Alex Kovalev at 84.0% and Saku Koivu at 67.7%).  The take-away for me is that the power play doesn't necessarily need to run through one man to work.  It can work that way, but sometimes (most times?) it works best to have five players on the ice who can attack with the puck.

I bring this up because Ales Hemsky (not on the list) has a two-year average of 77.2% (seasons of 79.4% and 75.0%), which would give him the third-highest total in the chart above if he had qualified a season last year.  Now, Ales Hemsky is a wonderful player with terrific vision, so it would seem logical to run the power play through him, but I'm beginning to wonder (as many others have before) if that doesn't hurt the team overall, even as Hemsky himself as able to pile up points.  Maybe the Oilers need to play a bit more down-low and allow Sam Gagner to handle the puck behind the net, giving themselves two different passing threats.  It's worth noting that in the year Hemsky was injured, Gagner had a ridiculously high 84.2% IPP, and that Robert Nilsson, another Oiler, is very high on this list as well.  It seems to me that the Oilers are likely too dependent on sets from the half-boards.  We all know that they've been forcing shots from the point for the last several seasons, but maybe they're compounding that problem by first forcing the puck to the man on the half-wall.

This leads into my point about team context.  Some of the biggest swings on the chart come when a player changes teams.  We can't know for sure whether or not this is happening because of variance or because of a change in the system, but I'd bet a good portion of it is the latter in some cases.  Take, for example, Alex Kovalev who was absolutely the straw stirring the drink in Montreal (84.0% and 72.2%).  Once he got to Ottawa, the way he was used changed, and his percentage fell like a rock (57.0%).  That should be a warning that what's being measured here is as much the team's system as it is individual performance.

The last thing I wanted to bring up with regard to the forwards is the nature of points themselves.  David Staples has been emphatic about this in the past, going so far as to award unofficial points, but he's absolutely right that the men in front of the net just don't get enough credit for setting screens.  It's clearly a valuable skill (pretty much every team has a guy doing it on the PP) but the bottom of this list is filled with the guys who park themselves in front of the net: Ryan Smyth, Dustin Penner, Tomas Holmstrom, Scott Hartnell, Steve Bernier... all of these guys have their contribution significantly undervalued by the points metric because it just doesn't measure what they're doing.

Next up, the defensemen: 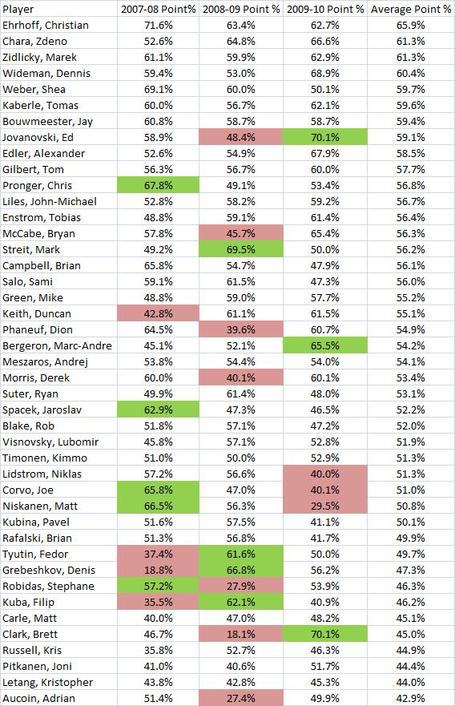 I wanted to again point out just how much more offense the defenders produce on the power play.  Remember, the highest IPP from a defenseman at EV was 43.9%.  On the power play, that would be the second-lowest total!  The power play is, in some ways, a completely different game, and it requires a completely different use of the skills needed to play an effective overall game.  There are defenders who are good both at EV and on the PP, but it shouldn't be a surprise that some players (like Marc-Andre Bergeron) have been able to make a career out of strong play on the PP and adequate (at best!) play at EV.