(Editor's Note: None of the following is a statement on the fine people in the fair city of Columbus. The author has been to Columbus a number of times and enjoys the city as a whole. The attendance numbers and market numbers listed below are simply facts culled from various sources.)

Aside from the cornucopia of early season NHL discipline, the biggest story throughout hockey has been the shockingly low attendance numbers in eight NHL markets. Those eight markets (New Jersey, Tampa, Dallas, Miami, Long Island, Columbus, Phoenix, and Atlanta) are averaging less than 80% capacity for home games thus far. Three of them (Columbus, Phoenix, Atlanta) are averaging less than 70% capacity. For those three, this isn't the first time attendance has lagged, but Columbus has a better chance to rebound than Phoenix or Atlanta.

When we last checked in with the Blue Jackets we talked about how close the NHL came to instead creating the Oklahoma City Blue Jackets, and what impact that would have on the franchise. I believe the conclusion still holds:

At the time of that article the management group in Columbus was complaining about losses of up to $12,000,000 per year, $8,000,000 of which was coming from hockey operations. When the news about the Blue Jackets' operational losses broke, James Mirtle wrote:

Historically, their attendance has been decent, too, at least prior to the lockout, but because a private company built the building, Columbus pays significant rent (about $3.5-million annually), receives no arena perks, and ticket prices remain fairly low.

Mirtle is right. A quick look at historical attendance in Columbus shows that the debut of the team was marked by strong attendance figures, but as the team was stuck trying to break 80 points, attendance began to collapse. 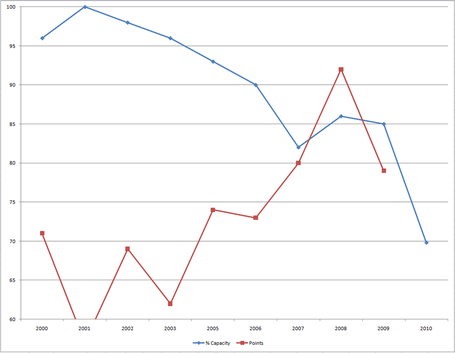 Obviously Doug MacLean had a significant impact on this franchise. He wasted seven top ten picks in a row and couldn't make the playoffs. He significantly hindered the development curve on a number of prospects and his performance drove attendance south. It's baffling that he's currently employed as a hockey expert for a major media organization.

Scott Howson took the Jackets to the playoffs in his second year (2008) and the playoff race reversed the attendance trend. But the Jackets are in the toughest division in the NHL and in the short-term at least, regular playoff appearances are not realistic. Incidentally, the Jackets probably would've been a playoff team in the Eastern Conference each of the last three years, and probably would have challenged for the 5th playoff spot last season. Unfoturnately, Howson's Jackets fell off a bit again last season, missing the playoffs and attendance dipped again.

Part of the issue with the Jackets and attendance is Columbus' rank as the 24th-largest market in the NHL, and its rank of 21st out of 24 U.S. markets. It's small, economically-speaking, compared to even places like Pittsburgh (27% larger), St. Louis (43% larger), and Minneapolis (115% larger). Overall entertainment dollars aren't as plentiful in Columbus, and those dollars certainly aren't going to chase terrible teams, and over the last ten years, the Blue Jackets can't be considered anything else. They've made the playoffs one time in ten years, tied for last in the league with the Thrashers and the Panthers, two of the other franchises suffering at the gate. But the Jackets can turn it around.

Consider that in the last decade, the Penguins, Blues and Blackhawks have all spent multiple seasons in the bottom five of NHL attendance and now Chicago and Pittsburgh are considered the jewels of the United States hockey crown. Once the team rebounded, the fan dollars came back. The early years of the Jackets show the dollars are available, but Howson has his work cut out for him. Howson should have already availed David Poile's strategies and techniques to himself as Nashville and Columbus are in similar circumstances, but Poile has managed to build a competitive team.

In six of their nine seasons, the Blue Jackets have filled the arena to at least 90% capacity. Years of Doug MacLean's mismanagement gradually wore down the resolve of Jackets' fans, and the last three seasons have been tough going for attendance. Howson is now in his fourth season and can no longer lay the existing squad at the feet of MacLean. The Jackets are spending more on payroll than ever before, and Howson has turned over almost the entire roster. If Howson isn't able to make the playoffs with his guys, spending more money than ever, the job of bringing the fans back to Nationwide Arena might just go to someone else.