Yesterday, I spent some time updating the "individual point percentage" charts for all of the forwards in the league who have played at least fifty games over the last three seasons.  Today, it's time to do the same for the defenders.  By way of reminder, what we're measuring here is the number of times an individual player gets a point (either a goal or an assist) compared to the number of total goals scored while he's on the ice (I was first introduced to this idea almost a year ago by Tyler Dellow).  So, for example, if a player is on the ice for fifty goals-for at even strength over the course of the season and  he gets a point on forty of them, his individual point percentage would be 80%.  The idea is that, much like with shooting percentage, there's real talent being measured here, but there's also a lot of luck.  Sometimes players will have seasons where the puck seems to bounce off of them more often than it should before getting into the net.  Other years, it seems like players can't buy a point.  This measure helps us to identify who falls into each category while also giving us an idea about which players are driving offensive results.  We'll take a look at the data after the jump.

Just as with the forwards, the cream generally rises to the top, but just as with the forwards, there are a couple of names that don't look like they belong near the top of this list, and for the defensemen, it happens to be the guy at the very top.  Steve Montador?  Really!?  I know, it doesn't make sense to me either, but the next fifteen guys all do, so aside from a foul odour at the top, the numbers seem to pass a very general smell test. Also, as you might expect, the numbers for defensemen tend to be much lower than those for the forwards.  In fact, the best defender (43.9%) is well below the average forward (69.5%)  by this measure, simply because defensemen tend to be less involved in the offense at even strength.  The average three-year average for defensmen is 28.8% or almost two and a half times less than the average forward.  Of course, because of the restrictions in place (min. 50 GP in each of the last three years) some famous names aren't on the list at all.  Players like Dan Boyle (two-year average of 37.6%) and Sergei Gonchar (two-year average of 33.8%) aren't on there, but both would very likely be near the top of the list if they had played the requisite number of games.  Finally, any time a player deviated substantially from his three-year average it's marked in either red (down year) or green (up year).  The raw data I used for the calculations comes from Gabe Desjardins at Behind the Net.  Here are the results: 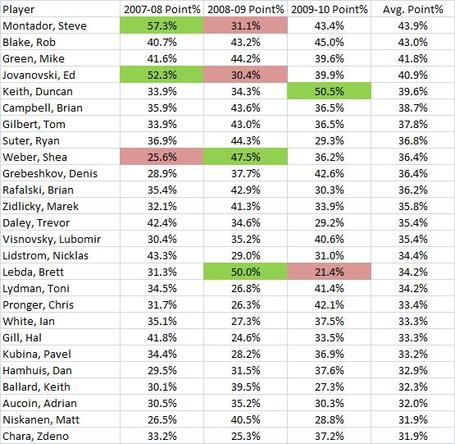 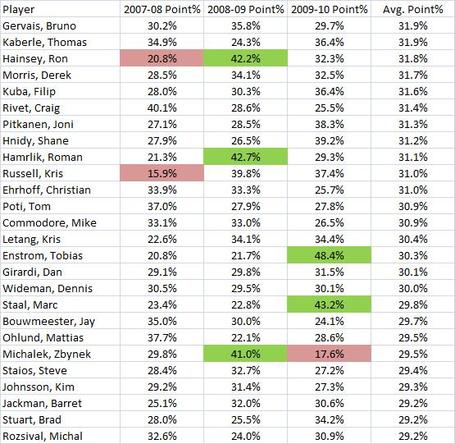 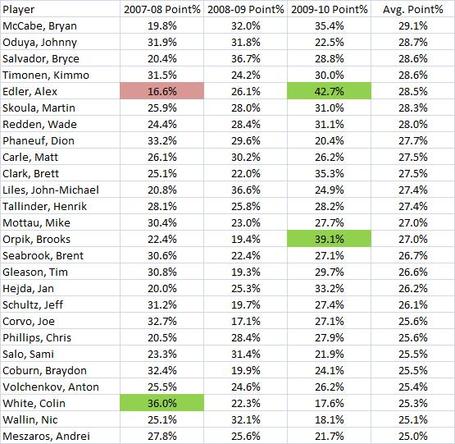 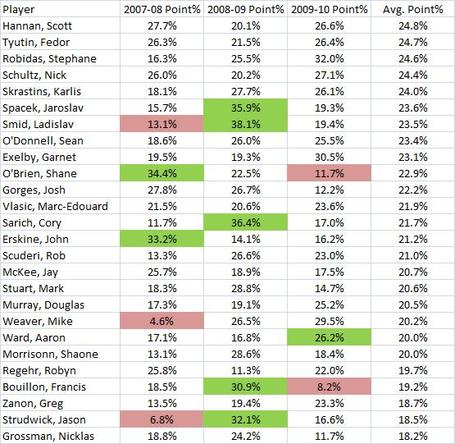 From an Oiler perspective, there are a ton of interesting things in the data.  First, Tom Gilbert is among the league's elite when it comes to driving EV offense if these numbers are to be believed.  When that contract was first signed, his high IPP was a concern going forward, but after three consecutive years of strong offensive play, I think we can be fairly confident that he's a guy who can create offense from the backend.  Until last night, I'd heard a lot of negativity surrounding Gilbert, but I have no doubt that he can be a very good player for this team and deliver value on his current contract, especially if the Oilers are able to get a solid shut-down pairing to take on the toughs at EV, while he and Ryan Whitney handle second toughs and most of the work on the power play.

Gilbert's former running-mate, Denis Grebeshkov, also come out near the top of the list.  When the Oilers traded Grebeshkov, I thought it was a pretty poor deal, and I was extremely skeptical of the idea that the Nashville Predators weren't going to give Grebeshkov a qualifying offer.  When they didn't, I was definitely surprised, and when he didn't generate much interest in North America, I was surprised again.  Grebeshkov is currently plying his trade in Europe and is one of the few bright spots on an SKA club that has been largely disappointing.  So far, Grebeshkov has eight points in nineteen games, twice as many as any of the club's other defenders and his +/- rating of +11 is the best on the team.  I understand that the Oilers were trying to stock up on picks, and that the player was some warts, but boy oh boy, could they ever use Denis Grebeshkov on this team today.

At the other end of the scale we have Jason Strudwick in second-to-last place.  The funniest part might be the fact that those numbers even include a few games at forward.  He's just that bad.  There aren't a lot of "Strudwick-types" on this list, mostly because bad defenders don't play in fifty games three years in a row all that often.  The guys he's keeping company with are generally shut-down guys with a decent reputation (although at this point we should all point and laugh and Nicklas Grossman).  But Strudwick?  He's terrible offensively and terrible defensively.  It sure is too bad that guys like Mike Mottau don't want to play for a rebuilding squad.  If only they did, this team might have been able to acquire some legitimate depth.