In last night's game thread we all watched in horror as the Oilers' penalty kill continued the longest and slowest implosion in recorded history.  Bruce noted:

It's astounding just how bad the penalty kill has become, but in talking with Copper & Blue regular dawgbone as well as Scott, we noted the same problem on the PK.  I kicked it off with the following:

I don’t know if anyone noticed the behind the net replay on that or not, but the movement there was terrible. Whereas the Barons never allowed the box to compress like that (they reshaped into a diamond), the Oilers don’t move and change positions. They had a scalene triangle there.

dawgbone chimed in:  The Oilers have two guys drifting to the puck almost every time.

After watching another penalty kill he said: I can’t believe that shift is intentional.

It's pretty obvious that something strange was going on with the positional play on the penalty kill.  Everyone has taken notice of something bizarre on the ice.  I saw it happening on every kill, so I dug into the video to find, as Vince Lombardi once asked, "What the hell is going on out there?"  After the jump, a review of five penalty kills from the last three games, all of which contain striking similarities.

Thanks to the NHL highlight reel, we can review these goals and watch what happens leading up to each one.  Click to enlarge any of the following photos.

First up, the Minnesota game.  The puck goes up the boards to the point.  Jim Vandermeer is transfixed by the puck and Theo Peckham scrambles to get into position. 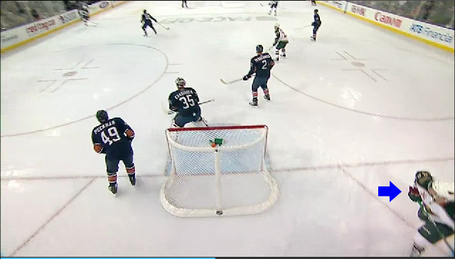 Unfortunately, they forgot something - Guillaume Latendresse.

Now watch what happens because this is a trend when the Oilers are down a man. 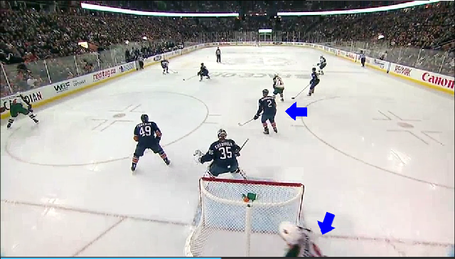 Vandermeer slides into the slot, presumably to take the possible shooter, but he's now over-committed and "flattened" the PK.  Any quick puck movement by the defenseman is going to leave Vandermeer in a bad position.  The only thing Vandermeer is set up for is the one thing the point man cannot do - shoot the puck.  Vandermeer can clear a rebound, but the forward has pressed so high that the point cannot shoot.  Strangely, he looks like he's tracking the man on the opposite side wall.  Peckham has pushed up harder towards the play and no one notices Latendresse.

The next frame has the Oilers staying the course. 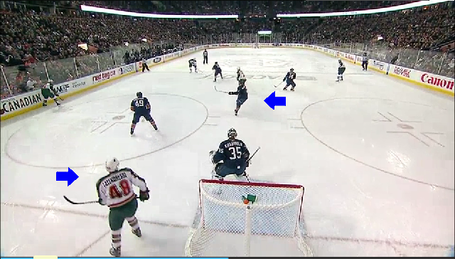 Vandermeer has now matched the forward up the side wall and is into the high slot and it looks like he's rotating somewhere to do something.  Peckham has pushed to within a stride of the faceoff circle and no one has noticed Latendresse, not even Khabibulin. 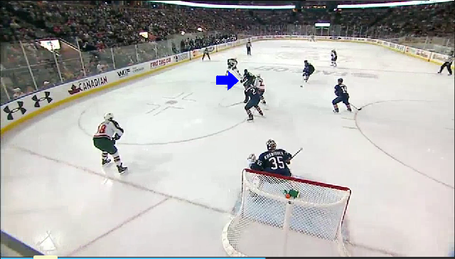 Guess who the blue arrow is pointing towards?  If you answered Theo Peckham, you get a gold star.  For some bizarre reason, Peckham chases the puck beyond the faceoff circle.  Vandemeer rotates over to cover for Peckham and Eberle has rotated down for Vandermeer.  The Oilers have now dropped all semblance of positioning as all four penalty killers are within two strides of each other.  And they still don't realize Latendresse is in behind them.  Nikolai Khabibulin has finally realized it though as he's down in his stance.  For those of you that have gone through a car accident before, you may understand this.  When you go through an accident, everything seems to move in slow motion.  Nearly every driver utters an expletive and even that expletive comes out in slow motion.  For Nikolai Khabibulin, he's the driver in this car wreck and he's just begun to mutter the "Oh..." portion of the expletive.

And we have the inevitable. 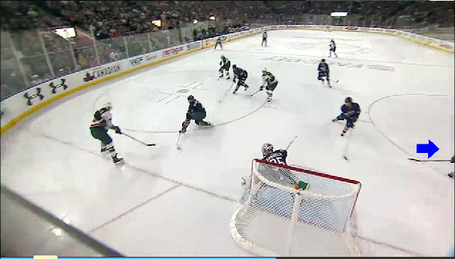 Latendresse has taken them by surprise and as the entire PK turns to find the portly winger behind them, they allow yet another winger to slide down behind them from the other direction.  Khabibulin is helpless.

Check the entire sequence here.  This is significant because we've got two defenders over-committing to the puck side of the power play and making it impossible to hold any ground positionally.

Now let's check in on the penalty kill the next game against San Jose.  On the first kill attempt, you have Shawn Horcoff and Jordan Eberle up front again, this time with Tom Gilbert and Ryan Whitney on defense. 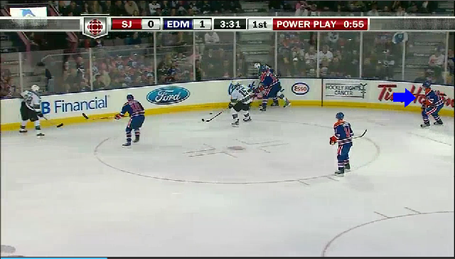 The puck has come over to the side boards where Whitney has engaged in a battle for the puck with Joe Thornton.  Dany Heatley is supporting the puck for San Jose, and no one is supporting for Edmonton.  Tom Gilbert has crept around towards the puck, meaning the Oilers now have four players committed below the circle to the Sharks' two and the Sharks outnumber the Oilers two-to-one in puck support.  The Oilers have four players committed to the right defensive side of the ice to the Sharks' three.  Again, the penalty kill has flattened, this time north/south.  The Oilers again cannot support positional play, given this alignment.  Should Heatley get the puck, and the odds are that he will since he is the only man supporting the puck at the moment, the Oilers can do nothing to stop his puck movement through the middle of the ice.

Knowing that, we have an idea of what will happen. 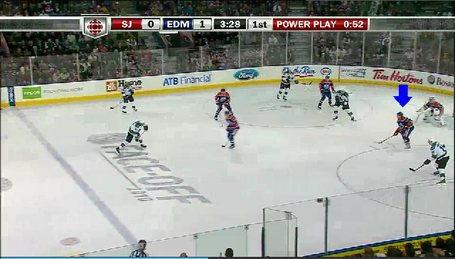 Gilbert realizes the Oilers are over-committed and turns back to the center of the ice.  Marleau flashes to the circle and Gilbert chases him as the puck comes to the point.  Gilbert moving to cover Marleau, but in doing so he leaves the center of the ice open and Heatley is free to move there uncontested.  Whitney is coming off of his battle with Thornton and has no chance.  Heatley, alone in front, shot from the defense, goal.

Check the results of the play here.  An over-committed defense another wide open forward directly in front.

The next sequence gets even worse for the Oilers. Tom Gilbert and Ladislav Smid are out on defense and once again Horcoff and Eberle are up front. 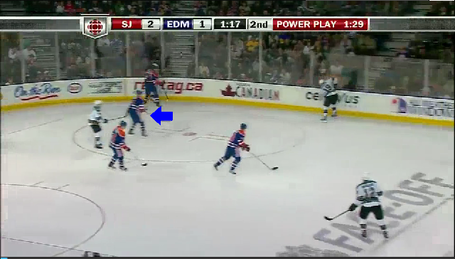 Ladislav Smid is marked with the arrow.  He has just come from behind the net and his partner Gilbert has chased Heatley to the corner to lay a big hit.  The Oilers now have two defenseman at or below the left defensive faceoff dot.  Eberle hasn't quite moved back to a forward spot. Once again, the Oilers have flattened out and the defense has rotated out of position, over-committing to the puck side of the ice.

Gilbert comes off of the hit on the wall and chases the puck up the wall towards Thornton. 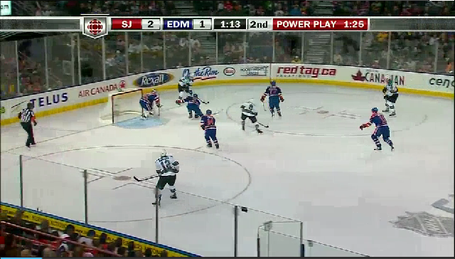 Thornton sends it in behind Gilbert who is about fifteen feet out of position, Smid turns to defend Healtey, and once again the Oilers leave a man wide open in front of the net.

It may seem like I'm being repetitive here, but against the Flames last night, Gilbert was out with Kurtis Foster, Horcoff and Eberle. 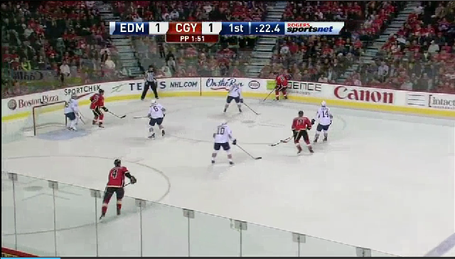 Stop me if you've heard this before.  Foster is initially out of position because he's got a man in behind him with the puck to that side.  However, Gilbert decides to chase the puck carrier to the boards.

Because this has worked so well over the last few games, we should expect big things.  This time, however, rather than flatten the box, Gilbert has extended it and opened a big hole in it.  So rather than put the onus on the weak-side defenseman, it's now on the forwards. 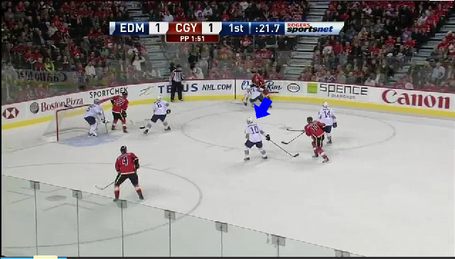 Foster has recognized his mistake and has moved down to cover the man on the post.  Horcoff has not accounted for Gilbert running to the boards and hasn't moved into the slot.  The great thing about this screen cap is Horcoff recognizing Bouwmeester moving into the slot at the exact moment this shot was grabbed.  Horcoff is the driver in this car wreck and this is his "Oh..." moment as the expletive crosses his lips.

But on this play, Horcoff has a passenger. 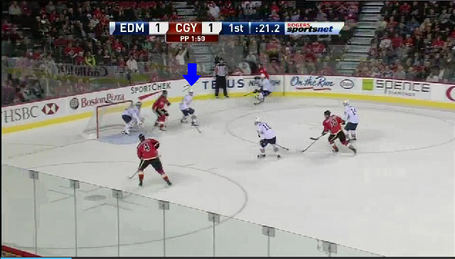 As the puck comes sailing through the slot to yet another wide open opponent, Foster snaps his head around, but it's too late.  However, in the video, you can see Foster's "Oh..." moment.

Also from last night, we have the I-Formation penalty kill.

The puck goes into the corner, and both Ryan Whitney and Jordan Eberle pursue it hard to the boards.  Gilbert engages the man in the crease, leaving Horcoff in the Bermuda Triangle. 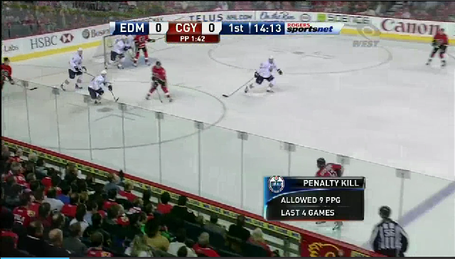 With two players below the right defensive faceoff circle to the Flames one, the Oilers leave two penalty killers on the rest of the ice for the Flames four attackers.

Unless Kelly Buchberger is Sun Tzu, the Oilers are in deep. 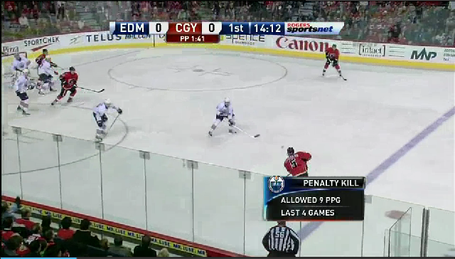 Eberle comes back up through the circle to the point as Horcoff is also headed to the point. Whitney is coming back into the play towards the slot.

The expected play here has to be to pass cross-ice. 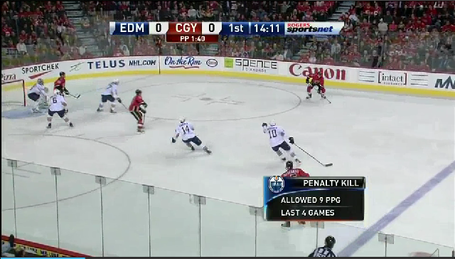 Eberle recognizes Horcoff is headed to the point, but much too late in the sequence.  The puck heads to the other side of the ice where Gilbert immediately disengages with the man in front and heads out towards the puck.  Whitney has stopped chasing the man in the slot and the Oilers have formed an I-Formation.  This might be useful in defeating the Stampeders, but it's not going to work against a power play.  Rather than one open man, the Oilers' I leaves four open men on the ice - the shooter, the man in the slot, the man in front and the backdoor pass to the opposite circle.

Can you guess what happens?

This looks like a coordinated effort to me.  It seems as though the Oilers defensemen are being coached to go hard after the puck from the corners all the way up the walls.  It's not just one guy making mistakes here, Whitney, Gilbert, Smid, Peckham and Vandermeer are all chasing pucks very hard.  Are there any hockey strategists out there that would like to take a crack at what they're trying to do?