In March of last year I wrote about "individual point percentage", which is a calculation of the number of times an individual player gets a point (either a goal or an assist) compared to the number of total goals scored while he's on the ice.  So, for example, if a player is on the ice for fifty goals-for at even strength over the course of the season and  he gets a point on forty of them, his individual point percentage would be 80%.  I was first introduced to this statistic by Tyler Dellow who used it to show that points alone aren't always the best measure to determine who's driving results.  But that was in March, prior to the end of the season, so today I wanted to update the chart with the final results from the 2009-10 regular season.  After the jump I'll present the individual point percentage for all of the forwards who played at least 50 games in the NHL in each of the last three seasons, and talk a little bit about what the data means in some specific instances, focusing mostly on the Oilers.

Before I present the numbers, I'll give a brief introduction.  You'll notice right off the top that a lot of the really good offensive players find a home near the top of the chart.  This makes sense; these players are usually driving offensive results when they're on the ice.  Tyler's article tells us that other than the guys at the very top and very bottom, there doesn't seem to be a lot of repeatability.  This is true to some extent, as the year-to-year variation is quite high.  Nonetheless, most players seem to stay within a pretty comfortable range.  There's real talent being measured, but over a short period of time it's soaked in luck so that an individual player might have one or two seasons that stray far from his actual talent.  As such, just like with shooting percentage, we really ought to take those "lucky/unlucky" seasons into consideration when we evaluate players.

In terms of the chart itself, the average for a forward over the last three years is right around 69.5%, so that should give you some idea of a good year and a bad year.  Any time a player deviated substantially from his three-year average it's marked in either red (down year) or green (up year), and all of these results are EV only.  The raw data I used for the calculations comes from Gabe Desjardins at Behind the Net.  Here are the results: 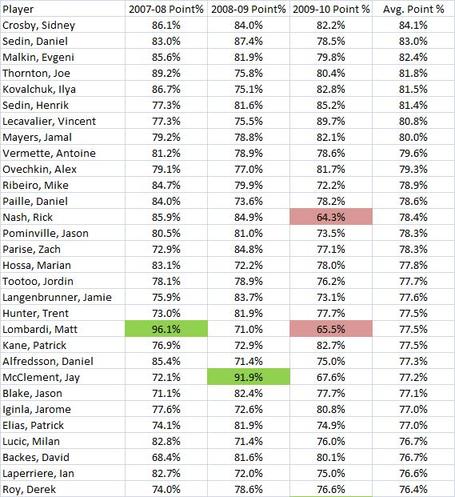 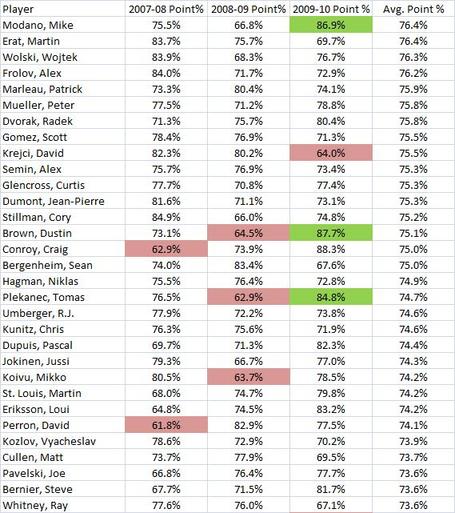 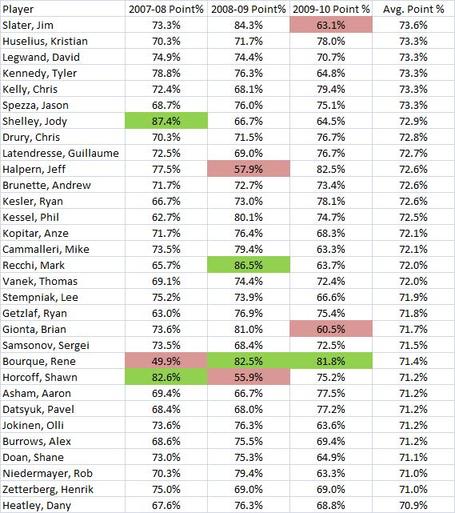 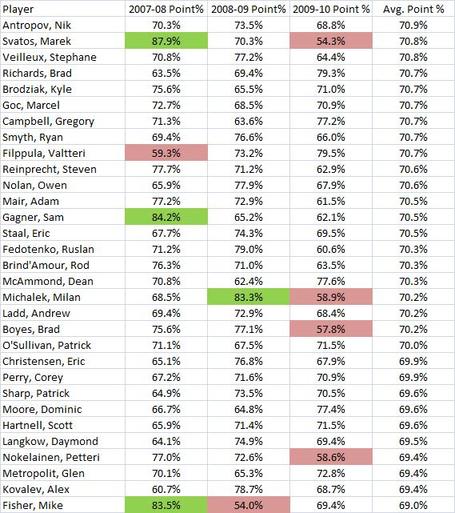 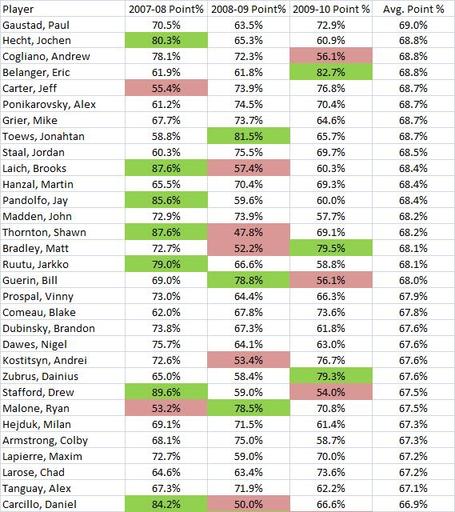 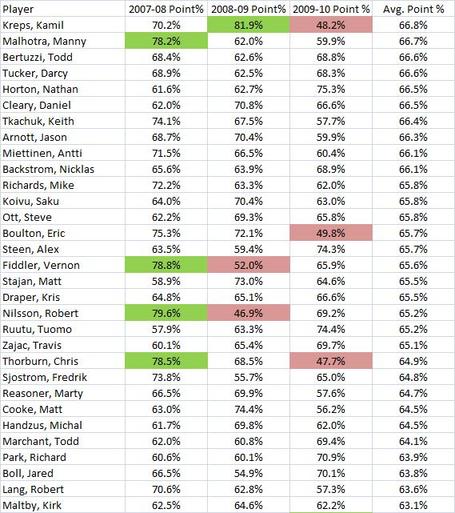 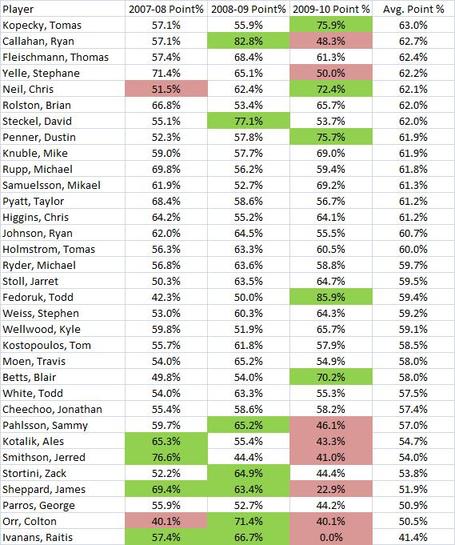 The first player I wanted to talk about is Dustin Penner.  There's no question that Penner had a phenomenal season last year, but a lot of it came from the percentages.  His shooting percentage at EV was higher than it's been any other time as an Oiler, and as we can see above, he was in on a lot more offense.  In the two seasons previous, Penner was well-below average, and last year saw a huge spike.  My question is, how much of the difference should be attributed to being away from Ales Hemsky and being forced to drive results for his line?  I suspect the answer is, "a lot."  So far this season, those two have been reunited alongside Sam Gagner, and while their performance has been generally pretty good, I wonder if the Oilers wouldn't be able to get a lot more out of Penner by letting him drive results on another line.  If last year was a one-off, at least you know that now before paying a complimentary big money on an extension.

Another very interesting group is the kids, both past and present.  Robert Nilsson signed his three-year deal after putting up an elite number that he wasn't able to sustain.  Some improvement from Andrew Cogliano and Sam Gagner over the last two years has also been hard to see because their ability to finish has declined.  I fear the same thing might happen to young Gilbert Brule who, like Penner, but up some gaudy shooting percentage totals.  He's not on the chart above, but his individual point percentage in 2009-10 was 84.2%, which is exceedingly high.  Since I don't think anyone is prepared to suggest Brule is an offensive leader, that number likely means he was quite lucky to get as many points last year as he did.  The Oilers decided to sign Brule for two years over the summer, and my sincere hope is that they're not regretting it halfway through 2011-12, but honestly, I'm not all that optimistic.

Finally, some fun things from other clubs!  My understanding is that Wild fans think James Sheppard is useless, and I can see why!  That guy didn't get any love from the bounces all year long.  Even if he really is terrible, there's no way he deserved an IPP of under 30%.  In fact, he's the only non-goon on the list to fall below 40% for a single season!  At the other end of the list, we have Sidney Crosby showing why he's the best player in the game.  Not only is he a very good player defensively, he drives EV results offensively at an elite level, and the results he's driving are some of the best league.  Just a phenomenal player... if only that ping-pong ball could have bounced differently (no offense Cogs).