Proving You Can Play for Twenty Minutes and Come Out Alright

Share All sharing options for: Proving You Can Play for Twenty Minutes and Come Out Alright

Wow, playing Calgary twice in the regular season in October now means that I will not be seeing the Oilers live in Calgary until April. Not the end of the world, but I would rather the games were spaced out a bit more. Especially since, after a game like that, I have a million things to talk about and I hardly know where to begin.

Alright, let's start with introductions. My name is Lisa, and I will be your dive for five bandwagon stewardess. I will be leading the singalongs and pointing out the attractions along the way. I can't quite tell if you are on board as most people present are still wearing ski masks. No matter, I think this will be more fun than it was last year, even if I'm the only one who believes that. After a game like tonight, however, I bet you are starting to see things my way. This, my friends, was a tiny indication of what we have to come.

I was fortunate enough to be invited by a vendor to the game tonight and so was sitting with three Flame fans. Super awesome, a girl can only dream about events like this. Through the first forty minutes I sure had to a take a lot of criticism. By the end of the second period I was told that it's because they know in a few years the Oilers will be right back on top. It's too bad that it was all too easy to poke fun at the Oilers for two thirds of the game. What was with all of the standing around and looking lost?

I'm not saying that there wasn't something to talk about during the first forty minutes though. The Flames went up fairly early in the first with a goal by Morrison while Brule sat out for two - our special teams still need some work, and this was just the tip of the iceberg - but Kurtis Foster did manage to score on the man advantage a little later on in the period; it was a tiny ray of sunshine on an otherwise cloudy day. I mean, it gave me a chance to stand and cheer and point to the 91 on the back of my jersey. That Paajarvi has great eyes for the game; his assist made that goal happen. Shockingly, I noticed Sam Gagner was playing with a fair amount of intensity, even laying out some hits. One of my friends said, "It was a hit on Stajan, he's a Leaf, it doesn't count." I had a good laugh, but agreed in some ways. Imagine my shock when I saw Gagner drop the gloves with Jokinen. The response from my friend was of course, "It's just Jokinen, he doesn't count either." Loved it, but good on Gagner for showing some of that veteran leadership we need to see from him this year. I had to borrow a friend's camera so the pictures aren't as nice as they could have been, but there you have it, Gagner fighting. 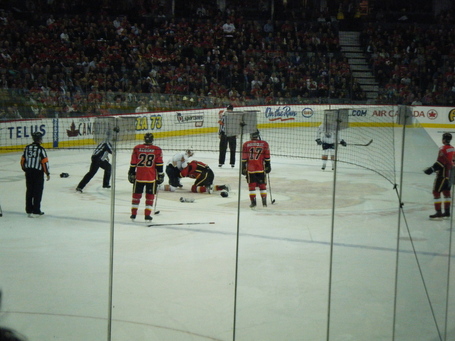 Second period, and wouldn't you know it, Oiler-killer Curtis Glencross scores just to remind me where I was. By the way, that flame they set off after goals is pretty hot! I feel like my eyebrows might burst into flames every time. The powerplay, at least after the goal, showed no signs of life, and Oiler fans got to see how it feels to be scored on while the opponent is shorthanded. Its not a fun feeling. It's not something I would like to see on a regular basis. Then Morrison scored for a second time to make it 4-1 Flames so... Huzzah! This game is sure working out according to plans! But really, I just wanted more life from the Oilers, some signs of life, some skill, some excitement to come is all I ask, beg, and plead. Kurtis Foster left the game midway through the second period, and Tom Renney mentioned after the game that it was due to a groin injury. More updates to come. Before the period ended, Jason Strudwick tried to bring a little life to the game by squaring off with Tim Jackman. I'm not even sure how to call this fight. It doesn't look like Strudwick fared too well, but in fairness, Jackman had Strudwick by the hair and the scruff of the neck, so Jason didn't exactly have a good chance to take aim. Whether it was the Strudwick fight or trying to keep up with Paajarvi, Jordan Eberle still found enough time and inspiration to score a beauty before the end of the second period. 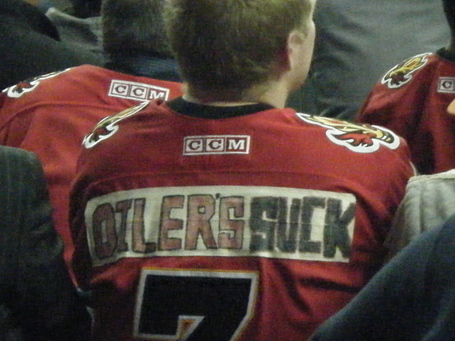 Going into the third period, I noticed this gem of a jersey foul. So this is what Flames fans are doing with their old Phaneuf jerseys? Using poor grammar? Good for you sir, I applaud your ingenuity.

I know I already gave away the end of the story with my title, but it's true. This is where the Oilers came to life and I lost my voice from cheering and shouting. This is where I was able to remember that there will be joy to the losses to come. As you recall, the Oilers were down 4-1 before Jesus Eberle scored at the end of the second. Thankfully, the Oilers scoring continued. Magnificent Magnus scored me another goal tonight, one-handed no less. This goal was so much prettier than his first goal, but a goal is a goal, and both were equally fantastic in that regard. Gilbert was next on the Oilers scoresheet, tying the game halfway through the third. You knew at this point with the Oilers waking up and the Flames starting to look a little tired that this had the potential to make it to overtime. The Oilers did successfully kill off a powerplay and indeed took the game to OT, and this time the, "Huzzah!" was a bit more sincere! Life is grand for an Oiler fan.

Overtime came and went quite quickly. Scoring chances on either end, but no dice. Shootout it was, and these Oilers are not the shootout champions of old. Not a single Oiler managed to score, and the Flames ended up with two points at the end of the game. No, the Oilers can't and won't lose every game. I hope for more hockey like what I saw in the third. These will be the memories we carry forward, these will be the memories that make this season bearable. 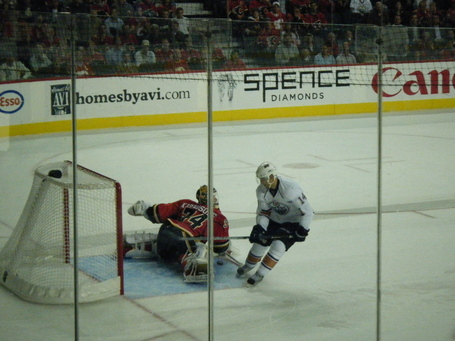 I was sitting in a very corporate section, and there was a lot of shop talk and suits around me. If I heard anyone's conversations around me, it was usually something about the oil and gas field. However if you listened very carefully you could hear some whispers about our big three. There was definitely interest whenever Hall took to the ice, and the Flames themselves definitely knew when the young ones were out there. Overall I think that the rookies held their own and battled well. You could even say that they were let down by some of their teammates. 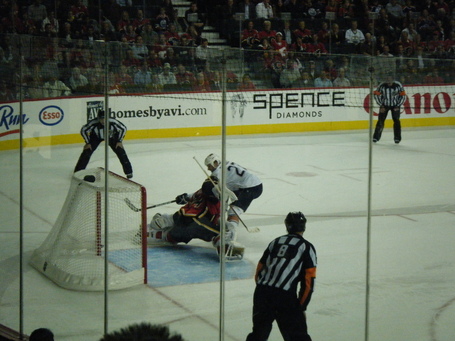 Sorry for the light game review, it's an early morning for me tomorrow. Key points to take away:

I highly doubt that he will score his first NHL goal against the Flames as we don't face them again until New Year's Day. So, Hall's first goal could be against anyone. Maybe even the Blue Jackets this Thursday? Chin up folks, we can get through this season together.