Oilers vs. Wild - Stats and Leftovers

Share All sharing options for: Oilers vs. Wild - Stats and Leftovers

I've got a collection of thoughts and stats leftover from last night's game, none of which were covered by the always-negative Benjamin Massey, who can't even see the underlying greatness of this group of Oilers.  He can't stop being mean long enough to look at some numbers, which I'll do after the jump.

Zack Stortini and Ryan Jones finished the game with a Corsi of -3 in just 58 seconds of even strength ice time.  Some quick math and we've got a Corsi/60 of -186.2, which is cause for even Jason Strudwick to laugh uproariously.  Colin Fraser got a reprieve because he replaced Penner on Hemsky's line during Penner's misconduct.

While we're at the whole Corsi thing, check this out, courtesy of Desjardins' www.behindthenet.ca:

The column on the left is the Corsi while the player is on the ice.  Fraser has played 36 minutes at even strength, Jones 31 and Stortini 15.  Essentially, they're surrendering a surplus shot attempt against per minute.  Sure, it's insane that it took Tom Renney watching them give up two goals in a minute before he benched them, but what other option does he have?  His General Manager has tied up his three scratches with a goon, a goalie and possibly the worst defenseman in the league.  Rather than being able to bench two of these three and call upon Liam Reddox and Colin McDonald to shake things up, he can only put the goon on the ice.  I was angry at Renney's Rawhide line management before, but now I'm starting to feel badly for him.

While I'm harping on the fourth line, here are the scoring chance differentials for those three:

It's a small sample size, but they are twice as bad as any regular forward from the 2009-2010 season.

Taylor Hall played like a man possessed in the last two periods of the game, and it showed in his team-leading +12 Corsi.  Most of that 12 came from his own stick, but he was having trouble with his direction.  Hall attempted 11 shots, but only found the net twice; he had three shots blocked and missed the net six times. Perhaps he needs to take the stick to the range and get it aligned.

While we're on the event summary, take a look at the hits column.  There were 26 hits given by the Oilers in this game according to the official Rexall scorer.  I think he's being extremely generous, but the odd thing is he's only credited Hall with a single hit, when I can recall at least three hits laid by Hall last night.  He also credited Cogliano and Brule with nine hits combined.  I don't recall the HO-Scale Train of Death line last night, so I question that total as well.

Finally, here is the Head-to-Head scoring chances matrix for the Wild game: 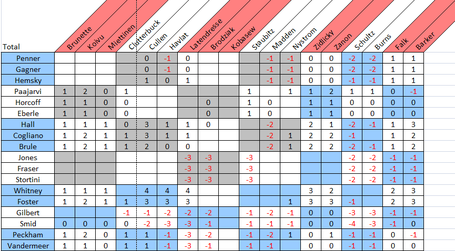