Share All sharing options for: Weekend Update: ITS ALMOST HEREEEEEEE!!!!!!!!

That's right, the leaves are changing, the sun rises a little later each day and the 2010-11 NHL regular season is about to being. This Horctober is a month where the Oilers play the Flames not once, but 5 times. Will this be the year where things will be more even, or will they be one sided for the Oilers favour? We just have to wait and see now.


Oilers news this week - pre-season continues and Oilers fans continue to fight the urge to expect too much from the season. The Oilers are now 4 and 1 with a loss to the Flames last night, a shoot-out win over the Phoenix Coyotes on Wednesday, and an extremely exciting win over the Vancouver Canucks on Sunday. Of course there were other news stories of the week, lets take a look at those shall we?

The biggest news of course was Gerber and Souray being placed on waivers. They are certainly not alone on the list, but Souray is one of the most well known names, for some very obvious reasons. Since both have cleared waivers, Sheldon Souray, still an Oiler. There are some questions out there on Gerber and waivers, well I know I had questions. It doesn't matter that he has a 2 way deal, he has to clear waivers to be sent down. In order to be called up he will not have to clear re-entry waivers. Thanks so our very own Scott Reynolds for helping me find that part in the CBA. In Gerber's case it is because he has not played enough games in the NHL over the past two years to have to clear re-entry waivers.

In other news, various players have been assigned to other teams as the Oilers slowly trim their roster in preparation for the upcoming season. We know that there will be a few more cuts, and the speculation on who will be next is if nothing else, fun.

In Oil Kings news, Mark Pysyk was named the next team captain. The Oil Kings also earned their first win of the season on Wednesday. Of course we expect to see many more wins from this team, its not just the Oilers hoping to make vast improvements this year. 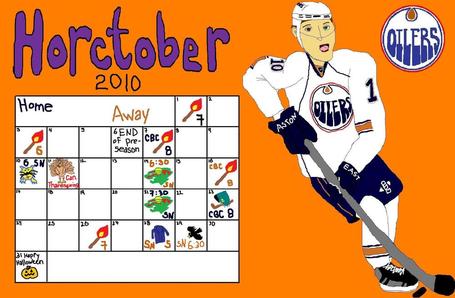 If you were waiting until the calendar actually flipped, here is your link for Horctober.

NHL news, players have been sent down, camps continue and anticipation grows. Ovechkin is still out there making commercials, David Frost is working in the hockey world again, much to the displeasure of many fans and other members of the hockey community, and Brian Gionta was named the second American born captain in team history, Carey Price seems to be making it in Montreal, well at least this week. I for one hope that Price can regain his composure and play well in Montreal. When you really think about it, Habs fans aren't in a much better place than Oilers fans were/are. I really don't think that misery loves company. If I want other teams to do badly, and Canadian teams at that, it certainly is not the Habs that I take issue with. Oh ya, one of our favourite players to hate is hanging up the skates. Darcy Tucker has announced his retirement after 14 NHL seasons. I bet his skills as an agitator will really help him out in his new career as a player agent. He should have no problems getting under the skin of the GMs and forcing out some good contract deals for his players. Maybe? Ok, maybe not so much, but he'll try.

For your reading pleasure, here are some blog articles I found interesting that you may have missed:

Pääjärvi and Hall: Do We Put the Boys on the Bus? - C&B Massey

Should the Oilers demote Magnus Paajarvi and Taylor Hall? - Cult of Hockey

Edmonton and Quebec City move towards new arenas, but in different ways - Cult of Hockey

Why Liam Reddox is the teacher's pet - Cult of Hockey

Tough Calls?: Not So Much in Goal - ON Brownlee

Ten Years: A Tribute to My father - ON Gregor

A Green Arean - ON Gretz

Dubnyk vs. Deslauriers: How Close Is It? - ON Willis

My Two Cents on Hall and Paajarvi: A Contract Year Burned? - ON Brownlee

What We Learned: Should NHL teams have Canadian player quotas? - PD Wyshnyski

The Most Infamous Exhibition Game Of All Time - Greatest Hockey Legends

in and around Edmonton this week, Brad Paisley plays Rexall on Monday, As I Lay Dying at the EEC on Tuesday, Crash Test Dummies on Wed at the Myer Horowitz Theatre, Robert Cray Band at the Arden Theatre in St. Albert on Thursday, and there are many many other smaller name shows out there. Trust me, if you're not watching sports, there is something out there that will entertain you.