Behind Enemy Lines, It Helps to be a Little Crazy

Share All sharing options for: Behind Enemy Lines, It Helps to be a Little Crazy

You know, sometimes being crazy is the best coping mechanism you could have. I'd like to think that I'm the good kind of crazy, not the over the top borderline kind. Yesterday morning, before the game in Calgary, I had asked Oilers ultra talented, super friendly superstar to be Magnus Paajarvi to score his first goal for me at the Saddledome while I was there so that I would have something amazing to talk about Monday morning at work. Might have been a crazy request, but it happened to work out in my favour so that's a win right?

I always knew I wasn't alone, but yesterday Oilers fans were showing their faces and their pride in full force. **NOTE I am not saying that anyone depicted in this article is crazy, just very excited** I think that the new found confidence is due to the Oilers 5-0 win over the Flames the last time they met. There were children in jerseys and HUGE groups of Oilers fans and plenty of interesting wardrobe selections. I walked into the Saddledome to hear the heartwarming "Let's Go Oilers" chant, this is how I want the Saddledome to feel and sound - like home!

The group in the photo above were leading the chant that I heard walking in, and that carried throughout the saddledome. It definitely was making Flames fans uncomfortable, and they had the numbers to counter the chant, they just never did.

These guys appeared to be good friends, I mean they weren't punching each other in the face. Then again, would you really want all of that face paint on your hands or clothes? it got me wondering if they had helped each other get ready for the night. Back to my point though, this takes a certain kind of eccentricity to do and take out in public. Now which came first do you think? The Flames face painting or the Oilers? 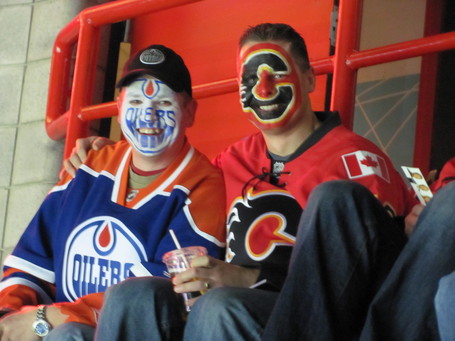 The Flames were giving away some build it yourself cardboard hats, this smart guy put his together inside out and wrote Oilers on it. That way he could sit with his Flames fan friends on either side who were wearing their hats, and fit right in. No, this may not fit into my crazy talk, but it does fit into my excited fan talk. Nice work my friend, it was a pleasure sitting near you, nice work. 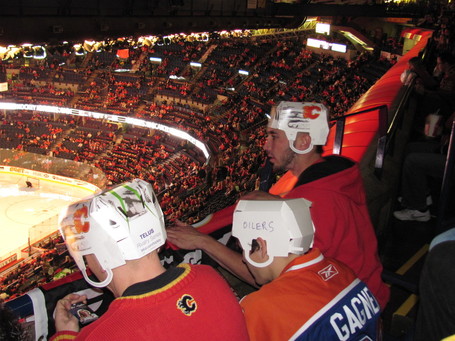 I know its a little fuzzy, but check out what that girl is wearing. I was at the game with some other Oilers fans and none of us could remember seeing pants like that for sale anywhere. We figure those were homemade, which makes them amazing and this fan a little crazy too. We will be looking for material to make these for ourselves, as these pants are just awesome. Again though, it takes that certain level of confidence, excitement or craziness to wear these out of your home. 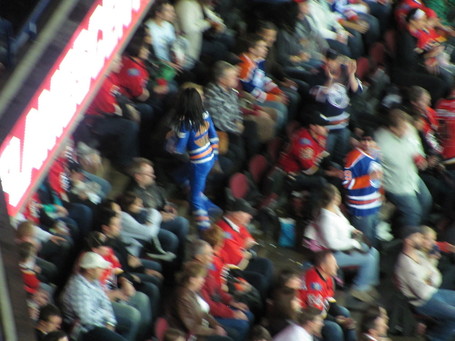 Now this group was something else too. The matching wigs were just the icing on the cake, what with the flags and colourful socks the girls were wearing. If this was socially acceptable, this is how I would walk around Calgary all of the time. I give this group big points for the simple fact that they put this together and wore it out, my friends would never go for this. My hat is off to you my blue wigged friends. 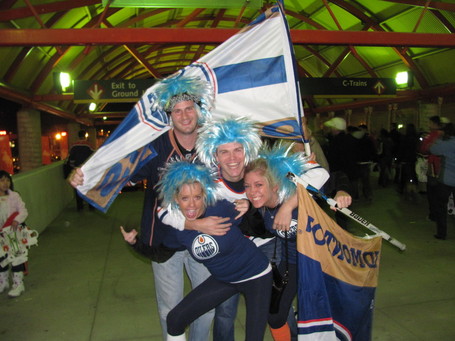 A big thank you to all of the fans that let me take their pictures, I had as much fun talking to them and looking for them as they did putting these looks together. I'd also like to remind people that the Saddledome is not the easiest place to dress in your Oilers finest; it takes a lot of pride, passion and courage We are lucky to have these fans on our side. I'd also like to say, what a time to be an Oilers fan. No one was that disheartened by the loss, this is a rebuilding team and losses are sure to come. Wins will be fun and hoped for, but right now it is more about the rebuilding process. In the meantime I'm glad that this is also a time when parents are dressing their children in their Oilers finest and where Flames and Oilers fans can get along. Let's go Oilers! 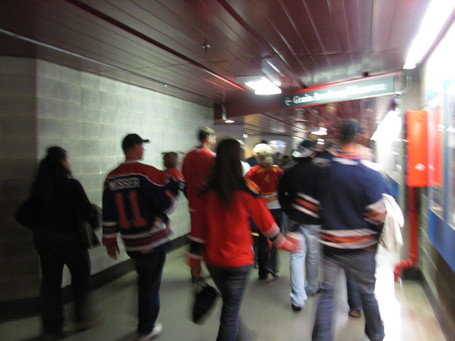