This is the first regular season Edmonton Oilers game I've watched all the way through this season. Boy, it's good to see nothing has changed.

Look, it's Nikolai Khabibulin! Hi, Nik! Moving pretty well, like his back injury is a thing of the past. Look at him, flailing desperately around the crease, punting pucks away and hoping madly they don't wind up on Calgary sticks. And there's Nikolai Khabibulin's five-hole, which is such a prominent part of this team I think it has a cap hit. Seeing the puck slide between Khabibulin's legs like that just like old times made me feel positively cozy. You know that feeling when you're back home for the holidays, and your family is bantering and you're holding a cup of spiked egg nog and a warm feeling of familiarity and satisfaction drifts over you? Imagine that feeling, except instead of warm it's like being stabbed in the face by an ice pick of despair.

It's lovely to see Steve MacIntyre again, too. Mostly on the bench, since he got 3:32 of ice time. Zack Stortini spent the game in the press box, which is interesting because Stortini is not only a tough fighter but an effective hockey player, and Steve MacIntyre is only a tough fighter. Presumably his being on the bench frightened the Flames into not trying to take liberties with our players, instead using the fact that they dressed an entire lineup of hockey players to beat us the old-fashioned way. There's something to be learned from that strategy.

And Steve MacIntyre was not the worst skater in the Oilers lineup tonight by a long way. Because ultimately, however many goons we epoxy to our bench and however many bottles of vodka our goaltender convinces the trainer are water, this is still a stank-ass hockey team full of players ready for either kindergarten or the glue factory and precious few in-between.

Oh, it all started off so well. I actually like seeing the Oilers play in the Saddledome. We have a lot of good history there. Mark Messier elbowing guys in the face, Theo Fleury turning the puck over, Roman Turek remaining motionless as pucks fly past him, Stu Grimson eating a veritable deli tray of fists... oh, the fond memories. Plus, Calgary's always been kinda a southern outpost of Oilertown anyway, from the first World Hockey Association season and the Alberta Oilers spending half their games in Cowtown to the present day. Just ask the active camera of our own Lisa McRitchie: there's enough copper in the Saddletown to wire most of Nunavut. 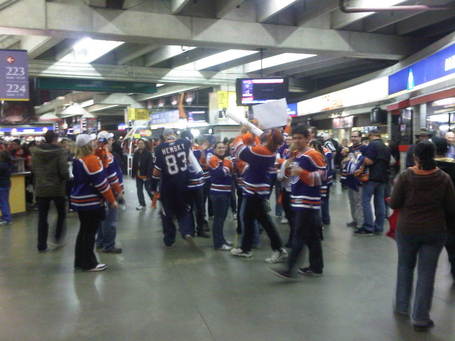 We got the game started right, too. Ales Hemsky debacled Ian White and Miikka Kiprusoff, which I enjoyed on every level. Gagpensky pinned the Flames back consistently, things were going well; sure, Khabibulin can't play goal but Kiprusoff isn't exactly pimping his Vezina candidacy either. Magnus Paajarvi-Svensson gets his first assist, followed by his first goal, and generally looks pretty good. Andrew Cogliano makes me as insane as ever but even he's less useless than usual.

But that game is obnoxiously close. Kurtis Foster blows some coverage, Khabibulin lets another one through the ol' wickets, and the Flames tie it in the third. Then the Oilers are killing a soft Ladislav Smid penalty with three forwards out, which you'd think would be a problem but it's actually defenseman Ryan Whitney who completely blows coverage on Jarome Iginla. Ballgame.

There were some positives. Jordan Eberle, for example. Sure, he didn't score, but he was constantly active with both his feet and his stick and looked pretty good. More than that, he's the most improbably good defensive prospect I've seen on the Oilers since a rookie Ales Hemsky was getting two and a half minutes a night from Craig MacTavish and picking off passes between the hash marks every shift. Eberle peels around the defensive end: he doesn't play the body much but the same staggering reflexes and remarkable hand-eye that butter his bread offensively are put to tremendous use in his own zone. I don't mind seeing Eberle kill penalties and I say that about very few 19-year-olds. Taylor Hall is clearly so raw the Japanese would eat him but he's also dynamic as hell and a remarkably strong forechecker. His defensive ambivalence was quite outweighed by his enthusiasm to haul ass into the attacking zone and try to mess up some Flame or another looking to catch a dump-in. There's definitely some Mike Grier in Hall's game, and when you have Taylor's skill level that's an awfully good strain to have in your genetic makeup.

Meanwhile, Sam Gagner gets a step better every few months in all the most invisible ways. As an 18-year-old, Gagner picked up his share of points playing with good teammates against nobody in particular. The next couple seasons, he got the same number of points playing against progressively better adversaries, and last year he managed 41 points and a -8 trying to play his little hobbity heart out against the best enemies the NHL could throw at him. This year, he's probably going to get another 40-ish points but he's flying around all three zones, breaking up plays, forechecking, nearly lighting up Jarome Iginla in the third period on an open-ice hit, and generally making Calgary lives miserable off the puck as well as on it. If he won more than eleven percent of his faceoffs, he'd basically be a proto-Mike Peca. Who saw that one coming when he was bagging 118 points in London?

I don't need to talk about Ales Hemsky and Dustin Penner in more than surface detail, so I won't. They're the only NHL forwards on this team who always look like they should be NHL forwards. Shawn Horcoff had a fairly good game too, although unremarkable: a decent second-line show. I don't care if he's not doing the 70-point seasons anymore, he remains useful.

The rest of them? Well, that's what this section is for.

18th Star: D Ryan Whitney. Whitney is, on paper, Edmonton's best defenseman. On paper, he also got the first assist on the opening goal of the game. Of course, on paper Tom Renney is a competent NHL coach and having a gigantic dude kicking his feet on the bench means you'll win more hockey games. That first assist consisted of getting Ales Hemsky the puck and watching the fireworks, which I admit isn't a bad way to contribute to the offense but it still isn't going to get my respect. The rest of his game consisted of skating forward, limp-wristedly dumping the puck nowhere, and then trying to turn around when the play gets shoved back down his throat.

He picked up the error on Iginla's winning goal, which of course didn't endear him to me. The smart guys have Whitney coming out even on scoring chances but again, I'm not sure how much credit you earn for being around while Gagpensky are cycling the hell out of the puck. He did not contribute to that even: far from it, he was actually a detriment. This award could have gone a lot of ways: Tom Gilbert and Jim Vandermeer were definitely honourable mentions. But Whitney gets the nod for sheer efficient putridity.

19th Star: G Nikolai Khabibulin. Welcome back, my friend. It's been so long.

Let me see. First off, to address the most obvious question, Khabibulin avoids the twentieth star because, in addition to his Ford dealership of a five-hole and his lack of rebound control so profound he actually kicked one puck into my Vancouver apartment, he was also moving pretty effectively and made some reflex saves that were almost decent. He did wind up with 41 saves and a .911 save percentage, and even though half of those came from Khabibulin giving the rebounds up so freely there were just too many decent stops in there to really lock him in the basement with nothing but a 40-pound sack of dog food for company.

But that was a pretty putrid game. Three of the goals the Flames scored had an awful lot of odor on them and one went into an empty net, so that's one goal (Iginla's) that Khabibulin had no chance on. Had Khabibulin played even decently, we would have won. That's pretty much the premier mark of a bad goaltender, right there.

20th Star: D Kurtis Foster. But then there's Kurt. When you've taken Nikolai Khabibulin's 20th Star on a night like this and you're not Jason Strudwick, you've done something special with your life. For example, it turns out that our $1.8 million dollar man is a worse skater than Steve MacIntyre. I swear this is true. He has no agility and little enough speed I think that what I presumed was his acceleration was actually tectonic motion. When you can only skate in a straight line and not very quickly at that, you have no business playing NHL defense.

Moreover, his defensive awareness was the pits. You think a guy who's six-foot-friggin'-five would at least be able to scan the ice like an observation tower, but instead he was caught flat-footed so frequently I've run out of metaphors to describe his horrifying uselessness. I can't think of a single good defensive play he made all night, but more to the point I can't think of a single play he made that was professional quality. A single well-timed clear or neat chip over a forward's stick, a good moving pick that forced the attacker to take an alternate route and slowed the transition down. Nothing. You think a guy that size would at least get hit in the face at one point but nope.

On the other hand, FRICKIN' CANNON FROM THE POINT, BABY! I realize this cures any sin besides having opinions about how crappy the organization that built this last-place team is, and between his frickin' cannon and his tallness it's a wonder Foster isn't captain. All the same, I'm not impressed. In fact, I'm actively reverse impressed. Thinking of Kurtis Foster makes me wonder if the rest of the Oilers aren't even worse than they seem and look worse by comparison. Go to hell, Kurtis Foster. Bring me my Jason Strudwick back.