The Oilers to Get a Superhero, No Seriously!

Share All sharing options for: The Oilers to Get a Superhero, No Seriously!

No, you haven't missed a blockbuster trade, no prospect or current roster player has suddenly hit a growth spurt or turned into a superstar over night. Sadly I don't get to write about anything nearly that cool. You may or may not be familiar with the name Stan Lee. If you're not don't worry, I wasn't ever a comic book loving teenaged boy either. Stan Lee is the mind behind most of the superheros that have been making it onto he big screen, well in some way or another. All I know is that Stan Lee is involved with comic book heros, was in some movies and according to Wikipedia was the "president and chairman of Marvel comics." At this point you're likely getting frustrated with me or you know where this is going, either way you are likely still wondering why I'm talking about comic books on an Oilers board, well please bear with me.

In another moment of brilliance, Gary Bettman and the NHL have decided to pay (likely a small fortune) to the comic book guys in an attempt to gain new NHL fans from a young age and have them grow into hockey fans. No, no, really they hope to get to the young kids - get them interested in the sport through giving each team a super hero. There are many things that seem silly with this idea, so I hardly know where to begin. This may also sound like a familiar story. If it does, I can't believe you remember SUPERPRO. I'm certainly not saying that I don't think that this will bring hockey into anyone's life. I guess I just keep shaking my head at the fact that the NHL just can't compete with the MLB, the NFL or even the NCAA in the United States and yet they keep trying. Oh well, at least some of the PR attempts make me smile. Can you honestly say that you didn't get even the slightest giggle out of the flying V or Mighty Ducks as a whole? What about Miracle or Mystery Alaska? Heck, even Hockey Night in Canada had that animated Peter Puck and then there was the Mighty Ducks the animated series! So even if this project fails, it still may be a little bit of a success. You want to know what this has to do with the Oilers now, don't you?

Apparently this project, The Guardian Project has been 13 years in the making, and will see each of the 30 NHL teams represented by a superhero. It does look a little flashy but also a lot cheesy from the trailer. You know that some of the superheros would be easy to come up with; The Devils, Senators, Panthers, Flyers and even the Sharks. Then you would have some that would have potential. Everyone knows that I am not a Flames fan, but that could be an interesting superhero, even a New York Ranger. Others seem like they will be hard. Can you imagine being the guy that has to turn the Ducks into a superhero? How about the Islanders? Leafs? Yup, could be interesting, but what about our mighty Oilers?

I've been thinking about writing this for a few days, so you would think that I had some amazing ideas for this superhero right? Sadly, nope. I even took to asking my friends, coworkers, and even that stinky guy on the train who wears a Flames hat and I didn't get too many suggestions. One suggestion I liked was from crabbypants at HFboards. He suggested that Oilerman would be really really big because the Oilers have been 'tanking for so long." Not only is that funny, but it mght be accurate. Some photos have leaked and Oilerman does indeed look quite large, the jury is still out on whether or not that is due to the Oilers recent lack of success. He also has what looks like oil spurting hoses on each of his arms. We all saw that coming though. I may be reading too much into things, but doesn't it look like he is LEADING the pack, like he is the top superhero? The Optimus Prime, the.. ok, I got nothing, I don't know many groups of superheros to compare to. Does Professor Xavier count? Anyways, if Oilerman is the leader my interest level just went up a notch. 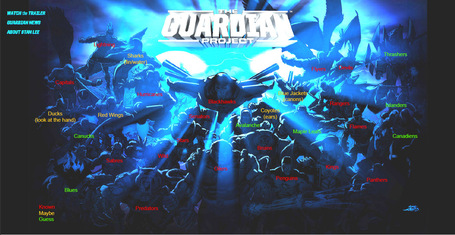 If you want to take a more literal look at things, and why wouldn't you? You might want to take a page out of Derek Zona's page. When I asked what he thought Oilerman's power's might be, this is what he said "An other-worldly ability to assess coupled with an incredibly short-term memory so that he is surprised by everything.  His catch-phrase should be: ALL OF A SUDDEN!" Derek wasn't the only one to tell me something similar, but his was the easiest to quote. How fun would that be really though? That's right, amazingly funny. I don't know that an eight year old boy would find it as funny, so that might not be the direction this project will go.

You know that if they went with a literal view of the Oilers, well the Oilers of late, our Oilerman would be strong looking but small in stature, fast, skilled and with a charming smile, but he would also be extremely brittle and would have to wear a surgical mask to avoid catching every germ in the air. Oilerman may or may not also be likely to complain about everything and especially once the cameras were rolling. You would both love and hate Oilerman at the same time, and you just wouldn't be able to quit watching because he would do something amazing when you least expected it.

See, you and I should be working for the NHL PR department. Oh well, we don't for now, so at least we still have our sense of humour. According to USA Today, the superheroes will be revealed one at a time, and The Guardian Project as a whole is to be released at the same time as the All Star game this January. According to the story, each team worked with the creators to have a say in what their character would be like. The rivalries between teams is also to be represented in this project, so Oil and Fire will very likely be mixed at some point.

It would seem only right that Oilerman would have at least one sidekick, so where better to look than to the AHL team, our Oklahoma City Barons. Who better to ask about the Baron's super powers than Neal Livingston. This is what Neal had to offer: The Baron would have "A keen awareness of hockey noobs with a seering desire to gain applause. Can skate fast, fight hard, and finish a plate of calf fries in a single meal. Also knows when to not speak about paycheck signer." What very admirable qualities in a sidekick. I think that this spells blockbuster even if the entire Guardian Project on its own doesn't. The Oilers could move on with this project themselves! Think of the marketing and merchandising. It would make waiting through losses a little more fun if nothing else.

I can't say that I will love, or even like this experiment, but I will be checking this out. This may have been a colossal waste of time. It could also be a hilarious colossal waste of time; another example of things that should not be animated. I'm sure we won't have to wait too long, and maybe during the waiting period I can think up some better Oilerman super powers. What would you like to see in our Oilerman?