In one respect, the Edmonton Oilers didn't do much this off-season.  They cleared out most of the chaff on the roster, but didn't trade Sheldon Souray, didn't add a top nine forward or top four defender via free agency, and didn't make a decision on the two "young" (Deslauriers is twenty-six!) goalies.  The result is a team spending $49,040,000 in player salaries at the NHL level (real money, not cap dollars), and another $4,500,000 for Sheldon Souray to get the hell out of the organization (minus whatever part of the bill Hershey's picking up).  In terms of cap dollars the Oilers have only spent $45,782,000, the fifth lowest total in the league.  If you add in the rookie bonuses - which won't all be cashed in - that number rises to $49,569,500, and including Sheldon Souray's cap hit pushes the cap payroll up further to $54,969,500... or about $4,000,000 under the salary cap.

Anyroad, the Oilers are rebuilding this year, so it's really not a big deal that the promise has not been kept and the team is spending less on player salaries (although I'm sure they'd be much closer to a playoff team with an extra two or ten or twelve million dollars spent on player salaries), especially if the savings this year are spent in subsequent seasons.  Plus, if it results in Pat Laforge declaring a profit at season's end (not bloody likely), that would be satisfying in its own way.  Further, even if the Oilers aren't spending quite as much on player salaries this season, there is one area of the organization that's received a much needed injection of cash, an area that needed major improvement, and was perhaps the major focus of Steve Tambellini's summer: the Oklahoma City Barons.

With two losses to open the season, things haven't exactly gone smoothly for the Barons, but one reason for optimism is the amount of money being spent on the team this year compared to the amount spent on the Falcons in 2009-10.  Thanks to Capgeek, we can take the rather nebulous "more" and make it somewhat more specific.  In the two charts below, I've first listed the payroll for the Falcons' opening night lineup in 2009, and followed that with the payroll for the Barons' opening night lineup in 2010 (unfortunately, I don't have access to the salaries on contracts that don't have an NHL component, so those needed to be estimated, and those estimates have been highlighted): 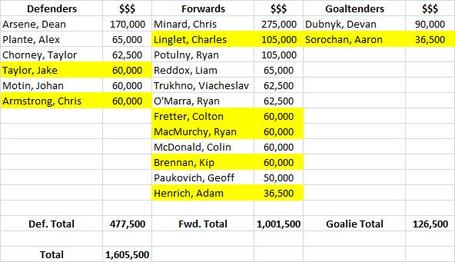 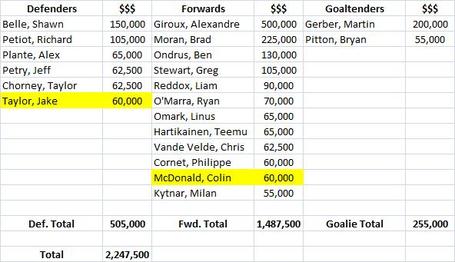 That's about 40% more spending this year than it was last season.  In a subsequent post, I'll compare how much the Barons are spending to the other teams in their division, but I strongly suspect the Barons will be spending more than most of these other teams, and like it or not, spending more than your competition is a huge advantage.  Unless of course you're the Oilers and you spend over the cap and still manage to finish last.  But at least you guys aren't built by... well... maybe this will be different.