Last season, I took to calling Pat Quinn's  forward management "Rawhide Line Changes" for his never-ending attempts to roll his lines 1-2-3-4 (Rollin' rollin' rollin') and his defensive pairings management "The Alberta Waltz" because he never matched his pairings, he just threw them over the boards 1-2-3, 1-2-3 all game long, all season long.  The official line word had Tom Renney managing the defensive pairings, but given his meticulous work in matching lines and pairing while coaching the Rangers, I felt that he had very little to do with bench management.

I may have been wrong.  After the Flames game, I looked at the shift charts and found Renney's bench management looked very similar to Pat Quinn's, in fact, it was exactly like Pat Quinn's strategy.  He rolled both his forward lines and his defensive pairings for the entire game.  Rawhide and the Albertz Waltz was back in Edmonton

Below is a screenshot of the shift charts for the Panthers' game.  In it, I've used Vic's fancy application to drag and drop the forwards so that they are positioned together, as lines:

Renney is using Rawhide line changes once again.  It could be that he's simply testing the waters with his team, given that he's got so many young players and doesn't have a line to match without outside of the Dustin Penner - Sam Gagner - Ales Hemsky line.  And unless he wants to break up that line, he's stuck without an option at rescuing the Magnus Pääjärvi - Andrew Cogliano - Gilbert Brule line, the line having the most trouble at even strength through the first two games.  Of course, this could've been fixed over the summer by signing a center that could play defense and take faceoffs, and could've been fixed each of the past three summers, but the Oilers have completely ignored this for so long that it's now a running joke.

I've read a couple of discussions centered around a checking line with Ryan Jones and Shawn Horcoff, and Bruce has intimated his belief in Zack Stortini as a viable option for a checking line, but the players aren't there to pull it off.  Given the defensive deficiencies on the blueline, perhaps rolling them over and over is the right approach, there just aren't many options with this roster.

As with the Flames game, I read a couple of comments and posts about Gagner's line or Fraser's line being matched, especially early in the game.  The shift chart above shows that not to be the case, and the scoring chances match the shift charts.

Here is the scoring chances matrix after the first period. If the matrix is blank, there were no chances for or against between the two lines.  If there is a zero, there were chances for and against, but they canceled each other. 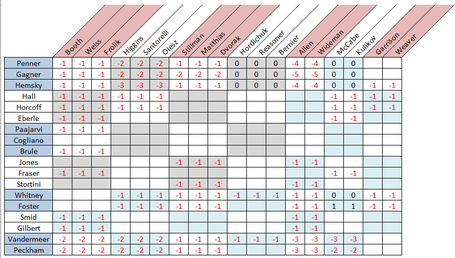 Penner-Gagner-Hemsky struggled as Bryan Allen and Dennis Wideman were out there against them for a big part of the period.  Part of the issue in rolling your lines and pairs is that randomly the third pairing will be out on the ice with the first line.  This was the case last night - Vandermeer and Theo Peckham had a tough first period and they were out with the Gagner line often.

The matrix below shows the game totals: 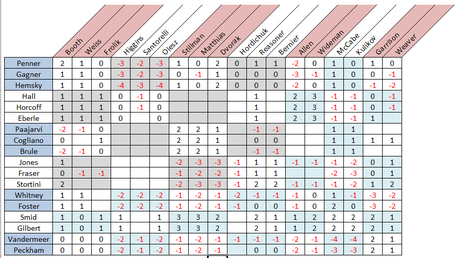