How bad are the current Oilers? (continued)

Share All sharing options for: How bad are the current Oilers? (continued) 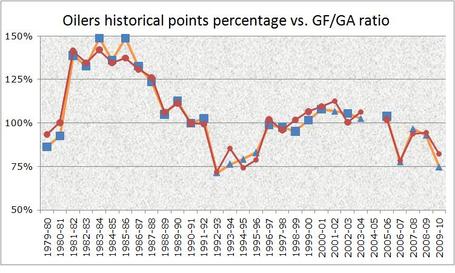 Yesterday I posted a graph showing the Oilers' historical regular season performance expressed as a percentage of their standings points (or Pts%) relative to league average. In the comments Scott suggested that points are just one indicator of team strength and maybe not the best one. So I revisited the Goals For and Goals Against results from those same 30 seasons, and calculated the ratio between the two. This resulted in a revised graph which continues to represent standings points in the copper line with the blue markers, while GF:GA ratio is the overlaid red line. (Click to enlarge.)

The first and most striking result is just how close the two methods are. There are relatively few outliers, with one of the greatest ones appearing in the partial season that is 2009-10. By points the Oilers have just 75% of the league average, ranking 29th among the NHL's 30 teams; by GF:GA, the team is at 82%, 26th in the league. Which still stinks, it just isn't quite as awful as the club's standings suggest. If you believe that GF/GA is the better indicator of true team strength, a slight correction towards mediocrity might be expected; that said, Ales Hemsky is done for the season and Nikolai Khabibulin may well be, so all things are not created equal.

Put another way, if you have accepted that the Fall for Hall is the way to go, the Oilers are "lucky" to have a head start; they currently have about 4 fewer standings points than their GF/GA suggests they deserve to this point.

More after the jump. 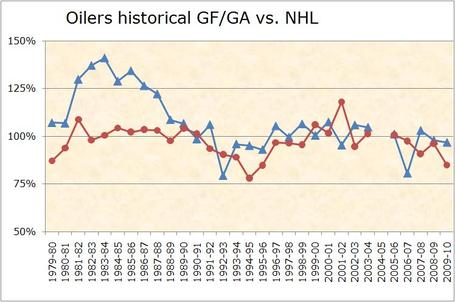 This chart breaks down the Oilers GF (blue) and GA (red) vs. the NHL average for each season. Note that the GA line is inverted; it is represented as [NHL Avg / Oilers] so that >100% is better than league average for both data sets. Thus in 2009-10, GF (97%) is just a little below league average but GA is considerably worse that that, challenging 1995-96 as the second worst defensive season in franchise history. It is that area which must be fixed first if this team is to regain any semblance of respectability; I would be shocked if defensive play wasn't Pat Quinn's highest priority in the current boot camp.

Historically speaking, the great Oiler teams hung their hat on offence as everybody knows; defensively, the team hung around just slightly better than league average throughout the Gretzky years, with the best balance between the two achieved in 1989-90, the year of the last Cup; and 2005-06, the year of the improbable Finals run. By way of contrast, in the team's finest defensive season in 2001-02 (2nd in GA), the Oilers missed the playoffs, derailed by a popgun offence. That was one of just 5 seasons in club history that the club was better defensively than it was offensively.

It's again interesting to compare the club's two 4-year runs of futility. Both times their offensive output absolutely crashed through the floor in the first of those years. Each time the Oilers quickly recovered at least a respectable level of offence, but their defensive game fell apart in the process.

In case you're not depressed enough already, consider the Oilers decade-over-decade performance over their first 30 seasons in the NHL. Note that all seasons are prorated as equal, although the 1995-95 season was truncated to 48 games and the current season is only 44/82 complete. Since those partial seasons both rank among the Oilers worst-ever, they will have a slightly disproportionate drag on overall results. Doesn't much matter; it's not exact science, and the trends are all too clear.