Share All sharing options for: Penalty Kill Save Percentage Update

About a month ago I looked at those goalies whose penalty kill save percentage was either very good or very bad.  Not much time has passed since then, which is actually one of the reasons I decided to do an update now.  In even a very small number of trials it's easy to see the tendency of most goalies who are sitting at the extremes (I looked at goalies who had a save percentage above .900 or below .840 and had faced at least sixty shots).  After the jump we'll look at what how our top and bottom groups have done.

As a reminder, the average save percentage on the penalty kill is something close to .866 (thanks to Tyler Dellow for that).  So all of the "goals saved above average" numbers have used .866 as average.  Here are the results for the guys who were on top in December:

As you can see, everyone but Tuukka Rask has come back significantly toward the mean.  In fact, as we can see by the change in the "goals saved above average" columns several of the goalies who were at the very top of the charts in December several of the goalies have been below average (in a very small sample size) in the last month including Pavelec, Nabokov, Deslauriers and Roloson.  Poor Jeff Deslauriers has gone from .917 to pretty close to league average which means he's been very much below league average over the last month.

Now let's take a look at the goalies who were at the bottom of the charts:

Similarly, most of the goltenders here have improved on their number from our last look.  Of the four goalies that have improved three of them have been above average with Hiller and Vokoun improving significantly.  Of the others Theodore has been pretty consistent, Ray Emery hasn't played and the two who have regressed have been extremely bad.  Vesa Toskala's play is just incredible. On 97 penalty kill shots he has cost the Leafs 13 goals against average.

So who are the goalies topping the charts today that may end up coming back toward the mean?  Let's take a look at the goalies above .900 with at least 100 shots: 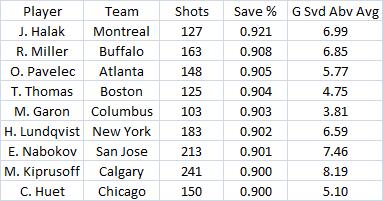 The only guy on the list really out of line is Jaroslav Halak.  He's certainly played well but that .921 number probably isn't going to hold up.  Nonetheless, it's good timing for Halak to have a hot streak, both for him (he'll get more starts) and potentially for the Canadiens who have reportedly been shopping Halak around the league. That's not to say Halak is a poor goaltender.  Unlike Ondrej Pavelec whose EV save percentage is down at .900, Halak has been quite good in all situations.  His EV save percentage is well up the list at .931.