Historically speaking, how Bad are the current Oilers?

Share All sharing options for: Historically speaking, how Bad are the current Oilers? 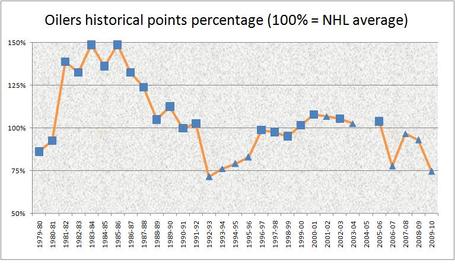 Here in graphical form is the season-to-season NHL history of the Edmonton Oilers.  Since the old standard of .500 no longer means what it used to in Gary Bettman's NHL, I have expressed Oilers points as a percentage of league average; for example, through 44 games in 2009-10, Oilers have a Pts% of .420 against a league average Pts% of .563, so they currently rank in the 75th percentile. This is not quite as bad as the 1992-93 Oilers (72nd percentile) in terms of relative badness; that said the current season has a long way to go and current trends are, shall we say, not promising.

The larger squares represent seasons where the team made the playoffs; the smaller diamonds are missed playoffs. With another idle postseason all but written in stone -- Oilers would have to go something like 32-6 to overtake the pace of the 8th place team -- the obvious comparison of the current team is with the 1992-96 Oilers, who also missed the playoffs four consecutive seasons.

One similarity is that both the 1992 conference finalists and 2006 Stanley Cup finalists fell off a cliff the following season. A key difference, however, is that the '92-96 teams showed steady if incrementally small improvement year over year before finally making a push in the fifth year. The current Oilers, on the other hand, made something of a resurgence in 2007-08 with the improbable and ultimately unsuccessful stretch drive, only to fall back a little the next year and a whole lot this year. Incremental improvement would be a whole lot easier to accept than what has happened over the past season and a half.

One area where the '09-10 Oil is poised to make history is its overall finish in the standings. Currently the Oilers rank 29th in the 30-team NHL, second-worst in the league. In their previous proud 30-year, 29-season NHL history, the Oilers have never once finished in the bottom 3 of the league.

Moreover, the Oilers have never once "earned" on their own (de)merits, a draft pick that was even in the top 5 in the NHL. The only time Oilers ever drafted top 5 was when they picked up a 4th overall selection from Winnipeg in the Dave Manson for Boris Mironov, Mats Lindgren and the first rounder from the second-last place Jets. The Oilers bottomed out at fourth-last that same year of 1993-94, however both picks got bumped down two spots due to expansion.

After the jump in tabular form is the Oilers finish, draft order, and what they did with their first round picks since 1979.  Significant players are shown in bold, with the jury still out on the last few seasons.  Note: you may have to set your screen on the "wide" setting (located to the immediate right on this page) to read the right hand column.

* - lost one position to expansion team