When it comes to Horcoff and O'Sullivan, breaking up should be easy to do.

Share All sharing options for: When it comes to Horcoff and O'Sullivan, breaking up should be easy to do. 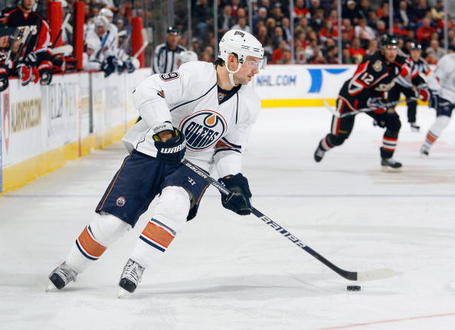 I was discussing Patrick O'Sullivan with a Blueshirts fan friend of mine yesterday when the subject turned to on-ice save and shooting percentages.  I immediately leapt to the conclusion that O'Sullivan would be lagging in both categories, as his performance early in the year was poor.  So I began digging into the numbers using Vic's always amazing timeonice tool.  I was sure that it was  going to tell me that O'Sullivan was poor, and that J.F. Jacques was an anchor.  What I found is that Shawn Horcoff is in the midst of a brutal stretch of luck, and that luck combined with J.F. Jacques' unique ability to get outshot 3-2 consistently makes Horcoff's numbers look far, far worse than they should be.  But I also found that O'Sullivan's numbers aren't as bad as everyone thinks, he's just being hauled down by Horcoff's bad luck and J.F. Jacques.  Below the break, I take a more detailed look at the numbers. 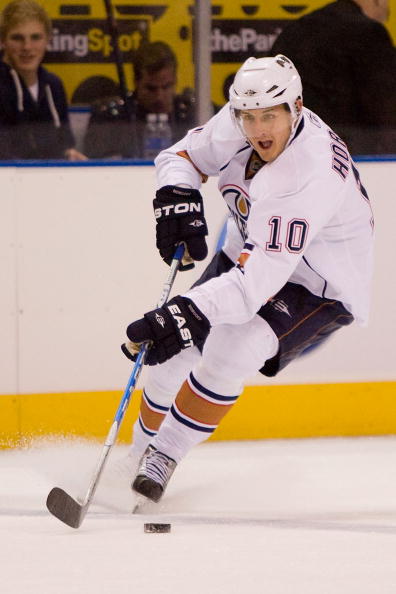 Look at the numbers for Horcoff and O'Sullivan without Jacques.  They manage to outshoot, 55-52, but are outscored 1 GF - 7 GA.  They are brutalized by a .865 save percentage behind them and an abysmally poor 1.8% shooting percentage.

Turn your attention to the bottom two rows.  O'Sullivan without Horcoff and Horcoff without O'Sullivan.  Horcoff is close to even in shots, and goal differential.  O'Sullivan is even in goal differential, but he's getting outshot 4-3. More noticeable is that Horcoff's even strength save percentage is .907, well-ahead of previously mentioned percentages.  Pull them apart and the bad luck doesn't happen.

Since Dustin Penner is the only reliable forward on the team, I also looked at Horcoff and O'Sullivan with Penner to see if Penner has had an effect on their stat lines.  Penner has outscored 35 GF - 24 GA at even strength this year and has outshot 319-294.  He's done that with an even strength shooting percentage of 11.0% and a save percentage of .912.  O'Sullivan and Penner have been outshot 32-45, but have some bounces as they've outscored 5 GF - 3 GA with a 13.9% shooting percentage and a .938 save percentage. Horcoff's bad luck affects even Penner.  They've outshot their opponents 71-51, but have been outscored 7 GF - 8 GA.  They've seen a relatively normal 9.0% shooting percentage, but have been backstopped by a .864 save percentage.      The Penner effect is slightly more evident with O'Sullivan, but not enough to say that he's playing poorly overall and being dragged around by Penner.

For Horcoff this year, it's come down to some freakishly bad goaltending while he's on the ice with Patrick O'Sullivan and having to make up for Jacques being on his line.  I looked at Jacques recently and found that he wants in all areas of hockey metrics and shouldn't be in the top twelve, maybe even the NHL.  I'm going to disagree with my colleague, Bruce, and say that take away the bad juju and J.F. Jacques and O'Sullivan isn't half bad.  Going forward, unless the Oilers are ready to sacrifice a chicken, or get Jobu a bottle of his own rum, Pat Quinn should keep Horcoff and O'Sullivan far, far away from each other.