Yesterday I took a look at shot distribution by game state and thought that I had contributed something to the old blog community.  Then I went over to the Contrarian Goaltender's blog to catch up on some Christmas reading and saw that he had done the exact same thing about two weeks ago.  Crikey.  So with that revelation, apologies to him, no offence/theft intended. At any rate, as I was catching up I came across this post and discussion about various faceoff situations faced by different goaltenders.  One of Bruce's comments caught my eye about how many faceoffs there are per game and which teams tend to have fewer faceoffs compared to average.  Both he and the Contrarian Goaltender suggested that this might be the result of a defensive strategy and/or the ability of the goaltender to move the puck efficiently.  I decided to look at this for each full season that's been played since the lockout to see what there is to see.  I'll take a look at the data after the jump. 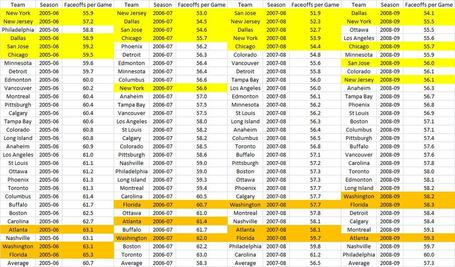 The first thing that I noticed was how many more faceoffs were taken in 2005-06 compared to the other three seasons.  This is pretty easily explained by the high number of power play opportunities in 2005-06 compared with the other three seasons.  In 2005-06, there were 11.7 power play opportunities per game, in 2006-07 it was down to 9.7 and then in 2007-08 down to 8.6, reductions that correspond rather well with the reduction in overall faceoff opportunities.

With that point out of the way, what do the five low-faceoff teams have in common?  Each team had the same primary goaltender for all four seasons: Lundqvist in New York, Brodeur in New Jersey, Nabokov in San Jose, Turco in Dallas and... Khabibulin in Chicago.  Are Oiler fans really prepared to accept that Khabibulin is a superior puckhandler?  I didn't think so.  So what else could it be?  One thing is fewer penalties.  With one exception these five teams never finished lower than 17th in the league in minor penalties in any of the four seasons.  New Jersey finished 1st, 1st, 4th and 10th in minor penalties; San Jose was 3rd, 3rd, 6th and 8th; Dallas was 16th, 6th, 16th and 15th; New York managed 15th, 13th, 9th and 13th.  And that, of course, leaves Nikolai Khabibulin's Chicago Blackhawks as our exception: 27th, 29th, 28th and 7th.  Well then.  Does anyone have any other ideas?