Share All sharing options for: Long Day's Journey into Night 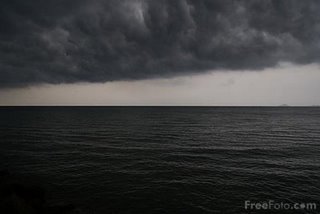 "It's too dark to see the landmarks."
--"The Night", Morphine

I've had this picture and this subject line saved as a draft since the day that Jonathan asked me to close The Church and come to work here at SBN.  The quote is only a recent addition.  It wasn't fun being an Edmonton fan then and it's a dark time to be an Edmonton fan right now, and as the title suggests, it's been a long ride to get to this point.  Two years of missing lowered expectations combined with two years of ignoring need and chasing hard after the pretty girl left most Edmonton fans frustrated to the point of rage.  The last five months of "assessment" and bewildered management have cast a death pall over what's left of the rational fanbase.  Four long years of a slow downward spiral ignored by management has finally made the Oilers what they deserve to be - the worst franchise in the league.

I'm not going to rehash what's gone wrong - everyone else has done it many times in posts, discussions, interviews and comments.  But for the last five months we've heard Steve Tambellini make excuses for his inaction and his inability.  He's blamed the goaltending situation.  The goaltending situation has become a running joke around here because a bunch of amateurs that analyze hockey as a hobby knew it was going to happen, yet a man paid hundreds of thousands to do the same couldn't figure it out.  He's blamed injuries.  He claims that he's not making roster moves because he needs to see what the team is all about when it's fully healthy, as if the Oilers are the only team in the NHL that suffers through injuries.  The Oilers were ill-prepared to handle injuries because of a lack of goaltending and middle six forward depth, something that Tambellini didn't feel he needed to address in the off-season.  He's blamed decisions.  Tambellini actually said that "...decisions are hard...", and yes, there is more to the quote, but that's the central meaning - decisions are hard for Steve Tambellini to make and he's struggling to do so.  And finally, he's blamed the NHL trade market, as in "Trades are hard to make."

Tambellini was upstaged today by a couple of his colleagues in Anaheim, Toronto and down the road a piece in Calgary.  In a league where trades are supposed to be hard to make and the salary cap situation supposedly eliminates many trading partners, those three teams managed to mega-contracts, salary cap anchors and spare parts, and given that Dion Phaneuf played last night, at least Calgary and Toronto pulled it off in about ten hours.  All of Tambellini's excuses, all of his hand-waving and all of his finger-pointing were today revealed when Burke, Murray and Sutter ripped away the curtain.

Now Tambellini talks about figuring out who wants to be an Edmonton Oiler.  As if the last 135 games weren't enough time to make that determination.  Even though the Oilers seem to be accidentally doing the necessary thing and heading towards a tear-down or a rebuild, depending on your point-of-view, only the most naive actually believe that it will go well.  Neither Steve Tambellini nor Kevin Lowe have proven any kind of competency in personnel management or team building.  Lowe spent two years almost purposefully building unbalanced teams, "I looked around and said "Hey, we've got a lot of defensmen!"", and Tambellini has spent two years doing nothing, including ignoring the smallest, easiest-to-fill holes on the roster.  There is no getting out of this until Daryl Katz realizes that he needs an honest assessment about the state of his team and reaches outside of his organization (to a competent man, not one that couldn't get a general manager's job in Vancouver for the last twenty years) to get one.

The running theme through all of Steve Tambellini's excuses is that his actions or inactions are behind every excuse.  He's blaming himself and he doesn't even realize it.  Every time he offers up another excuse as to what is going wrong, anyone with any sense at all understands that he's blaming himself.

Turning this around isn't that difficult.  This isn't an expansion team or a team that has been gutted and left bereft of talent.  There are top line outscorers, talented defenseman and some solid role players at the bottom.  Someone with a deft touch and the willingness to be creative in the trade market could get this done in a summer.  But that's not going to happen.  The Oilers' management team doesn't have the ability to run an NHL team, much less rebuild a franchise and that's why the darkness will continue.  It's going to be dark for a long time in Edmonton, much too dark to see the landmarks.