Share All sharing options for: Outshooting leads to winning. News at eleven.

In this post, I talked about the inverse relationship between Corsi and Zonestart as a discussion point on context in microstats.  The graph lent a visual to a not-so-obvious relationship for some.  Below is a chart that shows a more obvious relationship. Without enlarging the chart, do you have thoughts on what this represents?  The scale on the Y-axis is marked in tenths. 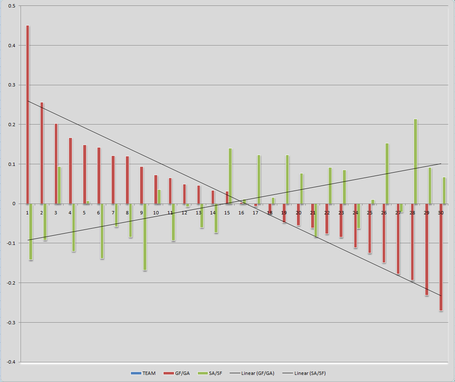 We'll get back to that chart in a moment.

The importance of outshooting has been discussed endlessly by Tyler at MC79, Vic at Irreverrant Oiler Fans, Jonathan Willis here and at Hockey or Die and of coure Gabriel Desjardins at Behind the Net.  Recently, Jonathan made an excellent post, taking up a topic that Tyler had presented as well.

Internet arguments against the concept of outshooting = outscoring = winning are typically reduced to the absurd, as in "The Oilers have lost the last four games where they outshot the opponents!"  That very small sample size aside, the concept holds.

The chart above is the even strength shot ratios and goal ratios for each team by finishing position for the last three years.  The main point of the chart is that it is possible to outscore while being outshot, but it's not likely.  The linear trend line inserted into the graph shows the relationship between outshooting and outscoring.  The middle four teams are muddled, as expected, and if we were to continue to track the outshooting versus outscoring ratios, eventually only the middle four teams would be muddled.  Everyone else would fall into the trend, because even though three years of data is more than the single games mentioned above, it's still the short-term.

Yes, it's possible to outscore while being outshot over the course of a season or two, but it's not likely.

Next up: the relationship between even strength outshooting and winning.  Jonathan looked at the results of Tyler's study and concluded:

Finally, with regard to point four I again turn to Dellow’s work. He did a massive big-picture post on team’s records when out-shooting or getting out-shot; all of the data from 1987-2008 is included. The full study is here; for the sake of brevity I’ll just post the records:

Update:  Here is the graph with the shots ratio flipped: 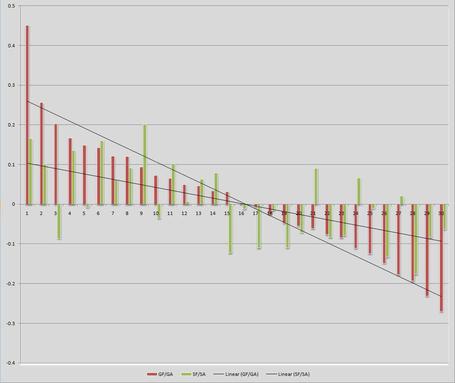