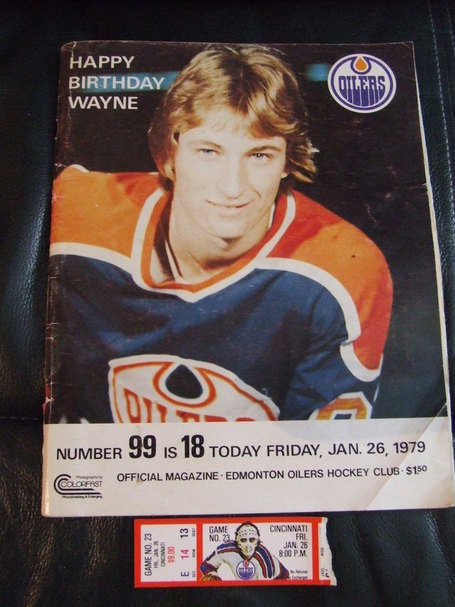 Some things are just meant to be. When Peter Pocklington and the Edmonton Oilers purchased the contract of the 17-year-old wunderkind Wayne Gretzky from Nelson Skalbania and the Indianapolis Racers in November, 1978, the Oilers 1978-79 World Hockey Association schedule had long since been established. One of the home dates was January 26, 1979, a Friday evening encounter against Cincinnati Stingers, Game #40 on the 80-game sked.

It would have been another ordinary mid-season game except for the important fact that Wayne Gretzky turned 18 that cold winter's day. Specific memories have been enveloped by the cobwebs of time, but as I recall there was a bit of a buzz that something special might happen to celebrate the occasion, just enough to try to stimulate walk-up traffic without giving away the farm. Didn't matter to me, as an every-game season ticket holder I was going in any event, but I made sure to arrive at my seat in the southwest corner of the lower bowl a little ahead of the usual anthem-time. In the process I purchased that evening's program, pictured above along with my ticket stub. Note the prices: $9.00 for the ticket, $1.50 for the program. A bargain at twice the price.

It was already clear to anybody paying the least bit of attention that the kid they cleverly called "The Kid" was something very special indeed. Those of us paying a whole lot of attention could scarcely believe our eyes. Right from his first game it was evident that he thought the game in a unique way, and had uncanny vision, hand-eye coordination, stick skills, and playmaking ability. Wayne didn't quite have the skating strength to pull off some of the more audacious moves he tried, occasionally falling on his keester when he attempted a particularly ridiculous cut, but you could see the ideas were sound and it was just a matter of time. He'd already begun to put the puck in the net and set up his teammates with regularity, entering the game at 39 GP, 23-23-46. The Oilers, who had started the season 3-5-0 before the trade, had improved to 22-17-0 and were solidly ensconced in fourth place in the seven-team league. Led by their precocious rookie-of-the-year, they would eventually wind up in first place.

Local reporter and true gentleman John Short wrote in a feature article in that program (excerpted):

Tonight, on his 18th birthday, perhaps it's fair to consider how much this young man means to Edmonton Oilers and their fans -- and to all of professional hockey. The simple answer, of course, is that he means a tremendous amount to hockey's future. But Wayne Gretzky is not in a simple situation.

Since his arrival in Edmonton, Wayne Gretzky has been questioned almost every day by members of the media. He has been sought after for speaking engagements. He has signed autographs beyond imagination.

Almost incidentally, he has led the Oilers in scoring and has become one of the strongest group of young centres in professional hockey. Without willing it, Wayne has become a symbol of youth and prosperity for Edmonton, where youth and prosperity are rampant. A sociologist might say something profound about Wayne being the right person in the right place at the right time, but we'll leave that to the sociologists.

He has been virtually perfect as a representative of the Oilers on and off the ice. The players treat him as what he is -- the smallest and youngest of the group, the runt of the litter. They respect his talent and they understand the unique situation into which he has been placed by his youth, his huge contract and his undeniable physical gifts. They also needle him without mercy, taking whatever steps are required to keep him entrenched as one member of an organization.

He is mature to an amazing degree, this young Gretzky. Watching him play hockey probably is a little like hearing Mozart play a piano at five or Einstein recite mathematics tables at seven.

Come the pregame and they had a special birthday treat for Wayne. The whole famdamily was there, Walter and Phyllis and Wayne's sister and three little brothers all dressed in Oiler sweaters with the already-familiar #99 on the back. They had a special birthday cake on a table at centre ice, actually two cakes in the shape of 9's (99, or 9+9=18, get it?), which Wayne cut in a schmaltzy ceremony. His teammates chipped in a bottle of baby champagne. It was nice, but underwhelming.

Then came the big surprise. Peter Pocklington took the mic and announced that now that Wayne had reached the age of majority they were going to rip up the seven-year contract he -- actually Wayne's dad along with his agent Gus Badali -- had signed with Skalbania, and replace it with a 21-year personal services contract which would keep #99 in Edmonton for the rest of his hockey life, right through until 1999. I don't remember Pocklington's specific words but they stressed that the "personal services" nature of the contract would protect him from the big bad NHL, and in the event of a merger he would remain Pocklington's indentured servant (I don't think he said it quite like that) and an Oiler forever. The soon-to-be Great One and Peter Puck signed that contract on the little birthday cake table as 12,321 witnesses rose as one to give our enthusiastic blessing. Only in the Rebel League might one even imagine an 18-year-old signing a 21-year deal, which to the best of my knowledge remains the longest professional pact ever signed on this continent. It is arguably the most influential contract ever signed in hockey.

Terry Jones, then a young reporter with Gretzky's ear, picks up the story in The Great Gretzky Yearbook II (1982):

How much? It was hard to say. But obviously, it made him a multi-millionaire.

"There's a negotiation clause after ten years," said Pocklington. "But there's no out. In the tenth year we will sit down and renegotiate because of all the factors such as inflation. If we can't agree, an arbitrator will be brought in."

Pocklington swore, than night, that he would not give up Gretzky as a price of merger and Edmonton fans weren't going to let him forget that promise. They wanted into the NHL. But not THAT badly, they didn't.

That the contract should expire in 1999 wasn't settled until mid-afternoon that day. And according to all, it was more Gretzky's idea than anybody's. "Gus tried to slow the deal down a little," said then-Oilers general manager Larry Gordon. "But Gretzky said he'd seen enough of Edmonton to know that this is where he wants to play hockey for the rest of his career."

Still buzzing with incredulity and excitement, we then settled in to watch the game which had no chance to be anything but an anticlimax and was all of that in a 5-2 Cincinnati triumph. I'll spare you the play-by-play, but share the scoresheet from that same program, completed in my fading handwriting. (Click to enlarge and improve resolution) 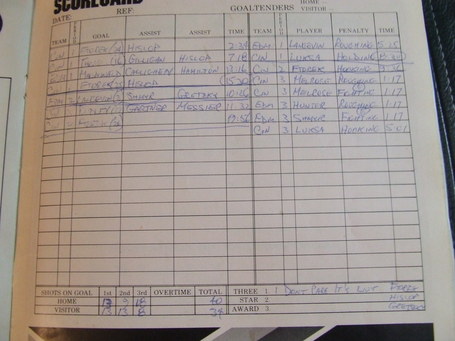 There are some mighty interesting names on that sheet. The hero of the day scored one assist on a beautiful feed to Dave Langevin, who that summer was on his way to Long Island where he would win the next four Stanley Cups. The other goal was scored by B. J. MacDonald and assisted by Brett Callighen, Wayne's linemates on the becoming-famous GMC Line. The second assist went to Al Hamilton, who would be the only Oiler to have his sweater retired before Wayne himself.

Even more interesting is on the Stingers side of the ledger. The winning goalie and my choice for the game's first star was Mike Liut, who two years later would barely lose to Gretzky in the closest Hart Trophy vote of the 20th Century. The scoring hero with a hat trick was Robbie Ftorek, who ten years later would be Wayne's first coach in Los Angeles, during his ninth and final Hart Trophy season. Another future Kings coach, Barry Melrose, picked up 7 minutes in penalties in a scrum with Oilers Dave Hunter and Paul Shmyr. The clinching goal, scored by Rick Dudley, was set up by two teenagers who would eventually join Wayne in the Hockey Hall of Fame: 19-year-old Mike Gartner and Mark Messier, himself just a week past his 18th birthday. Who could have known then that the three teenagers on display in the Rebel League that night would later play 4675 regular season games, scoring a staggering 2298 goals and 6079 points in the NHfreakinL.

Those NHL careers were not long in the future although we had no way of knowing it at the time. The WHA's strategy of signing underage junior stars had gotten the NHL's attention, and Pocklington's power move of locking up the brilliant prodigy got the desired results. The NHL talked turkey that summer, and when the merger finally did get accepted (with a major assist from Canadian beer drinkers), the Oilers were one of four teams to make the jump. Pocklington played the Gretzky card for all he was worth, promising how The Kid would fill houses around the league but any question as to who owned his rights would be a "dealbuster". By October the Oilers, Gretzky, Messier (!) and all, were playing in the NHL, and their fans were over the Moon. The very first game that proved we had been (grudgingly) accepted by the big boys, was against tonight's opponents, the Chicago Blackhawks.

The other milestones in the contract proved prophetic as to timing if not the actual sequence of events. Gretzky was to play exactly 9.9 seasons in Edmonton after which he did indeed have an out. After the tenth year Pocklington didn't renegotiate Gretzky's contract, he sold it, to Bruce McNall and the Los Angeles Kings. McNall immediately ripped up Gretzky's existing deal (already renegotiated once) and gave him a new long-term pact for $2 MM per season. Amazingly, for all the records, Cups, publicity, and ticket sales, Wayne had never made so much as a million bucks a year in Edmonton; from a strictly economic perspective he was the most underpaid superstar since Gordie Howe. His salary was influential in keeping a lid on league salaries, especially those in Edmonton, for most of the 1980s.

And true to his original word, Gretzky played 21 professional seasons, retiring in 1999. His famous sweater #99 was retired immediately, not just by the Oilers but by the entire league in an unprecedented move to honour this hockey genius. We lucky few who were seeing him on a nightly basis knew he was a special talent the night he signed that 21-year deal, and he more than lived up to the promise. He retired with 61 NHL records, and still holds 61 records today.

Speaking of today, it's the Great One's 49th birthday. Happy birthday, Wayne! It sure was fun to know ya.