At this point in the season it seems like we should know an awful lot about teams based on their record.  Earlier on in the year I looked at point totals after fifteen games and asked how well they predicted what would happen in the standings by the end of the year.  Today I'll be doing something very similar but looking at team records after 50 games instead and asking both how well they can predict what's going to happen in the standings and what might happen in the playoffs.  The results after the jump.

Looking at every season since the lockout gives us 120 completed seasons.  In 36 of those seasons a team's points percentage through 50 games predicted that same team's points percentage over the last 32 games within a 5% range.  So a team who won 60% of their points through the first 50 games would win between 55% and 65% of their points over the last 32 games about one third of the time.  In the other 84 seasons a team's point percentage changed by more than that +/- 5% range.  About forty percent of the time (48 seasons) the change was greater than a range of +/- 10%.  In other words, a team that earned 60% of their points through the first fifty games earned less than 50% or more than 70% through the last 32 games four times out of ten.  That is a lot of variance.  The chart below gives a more complete breakdown:

It's rare that teams have a change of 20% or more but beyond that it looks an awful lot like 19 random buckets (or maybe 12 random buckets once you get out to a change of 0.08 and beyond).  Not really what I was expecting to be perfectly honest and I'm not all that sure what to do with it.  So I'll move on!  The next chart (you may want to click on it to get a bigger image) shows us that there is at least some helpful information to be gleaned from the first 50 games of the year:

Since the lockout, only one team has had 49 points or less through fifty games (the Blues made it with only 47 points through 50 games last season) and made the playoffs and only two teams with 60 or more have ever missed (the Kings and Canucks both missed in 2005-06 with 61 points after 50 games; thanks guys!).  It's not perfect, but it's a pretty good indication for where your team stands.  That upper limit could see a challenge this year in the West.  Here are this year's standings after 50 games (let's set some records!): 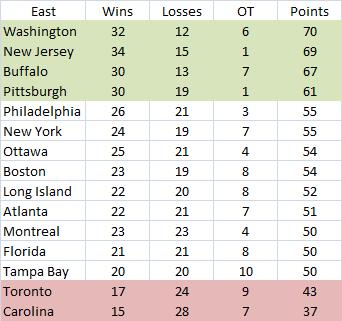 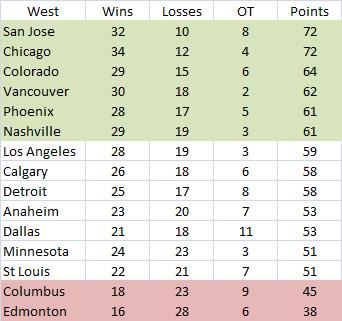 So... what about the playoffs?  I'm not sure what the conventional wisdom is right now.  I think it's fair to say that some folks believe being "hot" going into the playoffs is important and others think it makes no difference.  The results from the last four years would seem to imply that a team's performance in their last 32 games is more predictive than their performance through their first 50, despite the smaller sample of games.  The following chart tells us how well standings points predicted the winner of a playoff series (a "tie" means the two teams had an equal points percentage):

Maybe that's all just variance and the full season stats will come out ahead in the end but I'm not all that confident.  The "Full Season" results performed the best relative to the "Last 32" in the 2005-06 playoffs when all three methods took a bit of a kicking.  Right now 32 games looks pretty good but it's probably not the ideal breaking point.  I wonder where that "sweet spot" is.

The second is the 2008-09 Vancouver Canucks who also played much better over the second half of the season.  They too were bolstered by the percentages.  A PDO of 104.0 looks ridiculous on its face, which is what they put up over the last thirty-two games compared to the 98.5 they managed over the first fifty games.  But part of that is Luongo who was injured for a good portion of those first fifty games.  The Canucks also added Mats Sundin and the last 32 games miss his "January is just like training camp" section.  I imagine the Canucks were actually a much better team over that last stretch and they've continued their strong play (and ludicrously strong percentages!) this season (minus Sundin).

The next two teams are the 2007-08 and 2008-09 seasons of the Ottawa Senators.  The Senators structured these seasons in a chiasmus (good-bad-bad-good) which is very artsy of them.  They had a stupidly lucky run to start 2007 and then which corrected itself in 2008 and then they hired a terrible coach in Craig Hartsburg to start the 2008-09 season.  Thankfully for Senators fans the Hartsburg era is now behind them.

The last team is the 2006-07 Edmonton Oilers who were done in by the curse of Ryan Smyth.  The fall had nothing to do with anything but Smyth and anyone who tells you different is anathema.