Then Zack had a second dream and he told the opposition about it at every faceoff. "Listen," he said, "I had a dream last night. You'll never guess what it was! I saw Joe Nieuwendyk's face in the sun and Marc Crawford's in the moon and then twelve Stars with the faces of Modano and Neal, Wandell and Benn, even Petersen and Ott along with six others! And then - I couldn't believe - they were all bowing down to me!"

When he skated over to the bench to tell the dream to Crawford, he was sternly rebuked, "Well your dream is just that, a dream! Do you actually think that I and my general manager and all of my forwards will kneel on the ice before you? I mean, you're a terrible hockey player!" All of the Stars laughed but Crawford was nervous because he knew that the Oilers had already beaten them twice, that they had lost ten in a row on the road and that it would be especially embarrassing if they lost again with Stortini as the catalyst.

More Analysis After The Jump...

Visiting Team Scouting Report: At the beginning of the season I was not particularly impressed by the Dallas Stars. They've gotten better results than I expected in terms of wins and losses but the team still isn't very good. By goal differential the Stars are -13, which really isn't very good. One problem is a dismal penalty kill, but that's been balanced out by a strong power play that leaves them with a goal differential of 0 on special teams. The biggest problem for the Stars has been some less than great goaltending at EV where Marty Turco sports a .914 save percentage. This isn't a truly terrible number (like the .905 put up by his backup) but the Stars are spending under the cap this season and can't really afford a 5.7M player to play like something less. And 34th in EV save percentage (minimum ten starts) is something significantly less. The Stars have been able to slightly outshoot teams on the season, at least partially because of Turco's ability to move the puck, but unless he can start to stop more pucks this team is going to have a hard time outscoring their opponents. In terms of results, the Stars goal differential is one indicator that they might not be as good as their record implies. Another is their record in "clear" victories, i.e. games decided by more than one goal. Here's how the Western Conference stacks up: 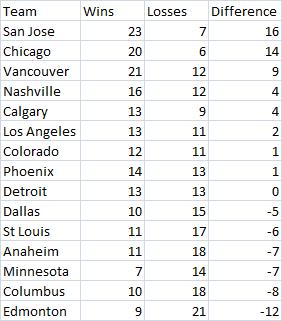 At least by this metric it looks an awful lot like there are three good teams in the Western Conference, six pretty good teams, five bad teams and the Oilers. The Stars are one of the bad teams and probably won't make the postseason cut. But, if they do "buy" at the deadline, they had better buy the right thing: a goalie. I know Derek has been suggesting the Stars as a nice candidate for Sheldon Souray but if I were them I'd be targeting Jaroslav Halak.