Over the last several days I've been using Gabriel Desjardins' NHL equivalencies to take a look at how players drafted in 2008 and 2009 have performed offensively so far this season. This will be the final installment of the series and will look again at the methodology and then the forwards from the 2007 draft. I've chosen to look at forwards since, in my opinion, a strong offensive contribution is more important for a forward than it is for a defender. I've chosen to conclude with the 2007 draft because at some point (and I've drawn my line here) the NHL equivalencies won't be as helpful in identifying the really good players because the really good players are already in the NHL. After the jump, we'll take a look at the class of 2007.

First off, a brief explanation of the Desjardins' equivalency numbers. The "equivalency number" is the percentage of a player's offence he's expected to bring with him from the league he's playing in to the NHL. The numbers are based on the actual performance of players moving from one league to another season over season. This historical performance establishes a different equivalency number for each league. What I've done in the chart below is taken each player's goals, assists and points, converted them to a "per game" rate, multiplied them by the league equivalency number, and then expressed them as an "NHL equivalency" assuming an 82-game NHL season. I've used this article for the translations from the NHL, KHL (multiply offence by 0.83 since a player is expected to bring about 83% of his offensive totals over to the NHL), SEL (0.78), Czech League (0.74), FNL (0.54), AHL (0.44), NCAA (0.41), WHL (0.30), OHL (0.30) and QMJHL (0.28).

I also wanted to note a couple of things that came up in the comments to the last two posts. The first is that context is extremely important. In my comments to the 2009 draft I noted that Evander Kane was well down the list compared to John Tavares and Matt Duchene and suggested that this might be evidence that Kane wasn't quite ready for the NHL. The Falconer rightly pointed out that the difference in performance had more to do with context than anything else since both Tavares and Duchene play a lot on the power play while Kane almost never gets to play on the power play. They also play a little bit more than Kane at even strength. The fact is, all three players have a very similar number of even strength points. The same sort of thing might explain why a highly ranked player like Chris Kreider suffers by this metric. Although his point totals are low (5 points in 17 games) he's playing for a solid NCAA program and may not be getting many minutes at even strength or on the power play. Obviously you'd like to see him get more than 5 points but it's hard to know how much of the missing production is a lack of skill and how much is a lack of opportunity (though if he was really skilled, you'd think he'd force some more opportunities). Another caveat that's important to keep in mind is that this particular method is only measuring offensive skills and isn't giving players that have a "wider range of skills" (g/t Lowetide) the extra credit that they deserve. Basically, this exercise gives us a rough guideline in determining the offensive skills of various prospects and while offence is important, it's certainly not the only thing.

Finally, the chart itself. Not all of the players drafted in 2007 are the same age. Several players had already passed through the draft at least once (and sometimes twice). All of these older players are included in the chart but are marked in yellow. I've also included any players who were drafted in 2008 or 2009 but for whom 2007 was the year they were first eligible to be drafted. All of these players have an "ND" in the "Draft Number" column to indicate that they weren't drafted in 2007. Injured players are at the bottom of the chart marked in red. Joining them at the bottom are players in a league that Desjardins doesn't cover (CIS, ECHL and European minor leagues). Anytime a player had played games in more than one league, I used only the numbers from the league he played in most often. Finally, the "Draft Number" column is not the player's actual draft position but the player's position among forwards. So, for example Sam Gagner was drafted by the Edmonton Oilers 6th overall but was the 4th forward to be drafted. As such, his "Draft Number" in the chart is "4." The chart is broken down into four portions so that it's easier to read, but you can still click on it to make it bigger. 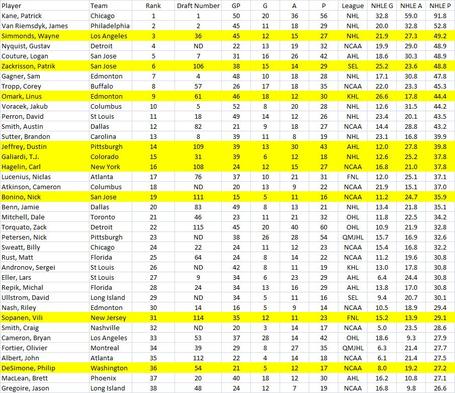 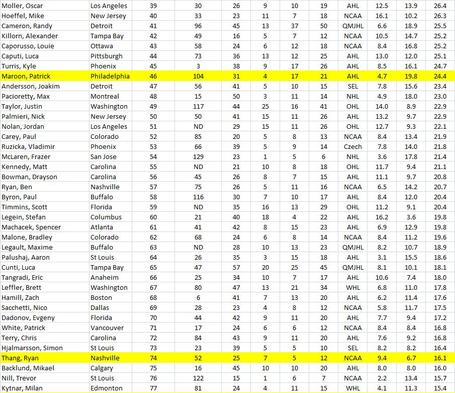 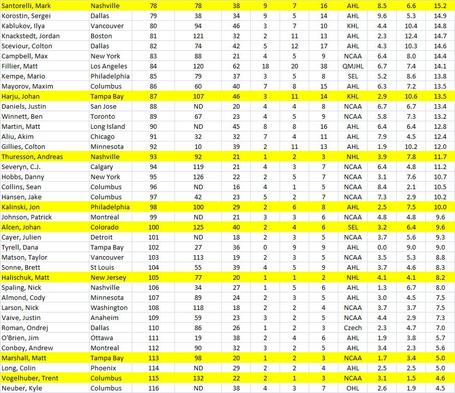 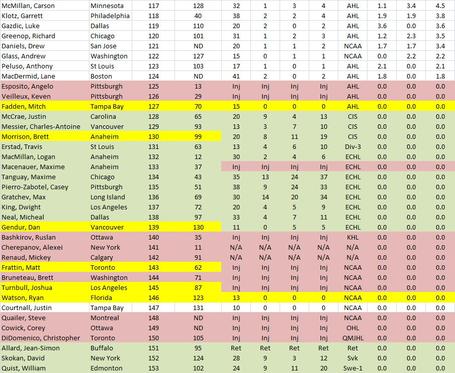 The first thing I noticed with the 2007 draft was the number of forwards that were actually drafted. There were 132 forwards drafted in the 2007 entry draft compared to 110 in 2008 and 119 in 2009. And the thing is, a whole bunch of them are just terrible. This was billed as a weak draft and I think it delivered. The top end talent actually looks pretty good, but there's really not much depth to be found. The last two pages are all guys who are either injured, playing in terrible leagues, or struggling. Two of the best "steals" in the second-third round are actually not even really a part of the 2007 draft class (Wayne Simmonds and T.J. Galiardi).

Looking at the top ten picks there were definitely some good things available. The most important Oiler pick of the draft was the Gagner selection at 6th overall and looks to me like they didn't botch it. There were plenty of good options around them but I do distinctly remember hearing that the Oilers were trying to move up in the draft to grab Kyle Turris. At this point, that looks like it would have been a pretty bad mistake. Turris played (and struggled) in the NHL last season and this season he's struggled in the AHL. Not as much as Zach Hamill mind you, but Zach Hamill also isn't a top three pick. The San Jose Sharks actually did move up in the draft to get Logan Couture and so far he looks like the real deal. I imagine the only reason he's still playing most of his games in the AHL is the salary cap. If the Oilers have a piece the Sharks would like then Couture is the prospect they're probably going to chase. I doubt San Jose gives him up, but he is a good one.

The rest of the draft is a bit of a mish-mash for the Oilers. They did get to trade up in the draft sacrificing two top forty picks to get Riley Nash whose offense is pretty underwhelming so far this season. He is one of those "wider range of skills" fellows but I was definitely hoping for a bit more offence from him. His first three years still compare pretty well to Shawn Horcoff's but there are a lot more guys with Horc's college career that become nothing than there are guys who become Shawn Horcoff. After Nash we have the hilarious Linus Omark and his numbers show well here. This is his second good season in a row and you'd think he should be able to play in the NHL. Then we've got Milan Kytnar. The fact that he's still playing major junior is a tell. The fact that he's not scoring at that level is another. During training camp I liked him quite a bit but there just aren't many guys that play an overage season in junior and still make the show. Then there's William Quist. That one didn't work out. A mixed bag for the scouts but still quite good, especially if Omark ends up being useful at the NHL level.

Finally, injuries. That Logan MacMillan pick cries out for comment. The 12th forward taken in the draft has 6 points in 30 games. In the ECHL. Injuries are likely a big (the biggest?) reason why. When you wish you were in Ryan O'Marra's shoes, you know that things are tough.