The Oilers habit of giving up goals due to positioning

Share All sharing options for: The Oilers habit of giving up goals due to positioning

On January 5th, in the game against Phoenix, Edmonton gave up a goal to Radim Vrbata because of faceoff positioning in a four-on-four situation.  Here is the first shot - we can see Souray lined up at left wing, Penner on the right side and the other defenseman, Tom Gilbert, is not in the picture. 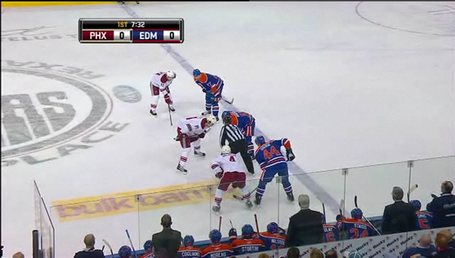 From the ice-level camera shot, we can see Gilbert's original positioning: 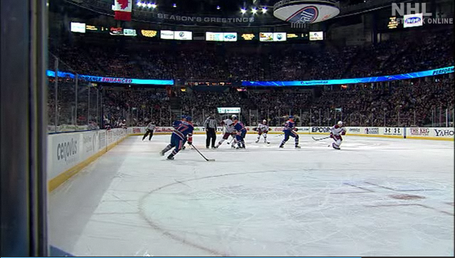 In the next still, we can see Gilbert breaking to the center of the ice after Hanzal punched the faceoff forward: 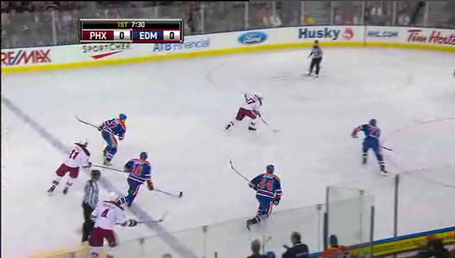 Check out the results of the play here.

At the time, I immediately blamed Gilbert. I was amazed, as was Dustin Penner if you watch the video, that the Oilers chose to line up like this as it goes against everything I've been taught and everything I've ever watched in the last thirty something years.   However, when I watched this again on DVR, Shawn Horcoff actually moved Gilbert over to the wall, thus exposing the center of the ice. In the intermission interview, Vrbata spoke about seeing the positioning and talking to Hanzal about winning the faceoff forward to the zone for the breakaway.

Fast forward to last night. Andrew Cogliano took a penalty during a four-on-four, leaving the Oilers down a man for a four-on-three.  The faceoff was in Edmonton's zone late in the game and Denis Grebeshkov chose to line up on the circle, goal-side.  Jason Strudwick then motions to Grebeshkov to change his positioning to the left wing, on the boards, leaving the center of the ice open to the Sedins and Salo, as seen here:

In both of these situations, the Oilers were not skating with five men on the ice.  In both situations, veteran players decide to abandon the center of the ice in favor of protecting the left wing, leaving themselves outmanned and overwhelmed to the goal side.

This faceoff positioning goes against everything I know about hockey, so are there any tacticians willing to step up and defend this?  Is this just an HUA on these veterans, or is it possible this is something that Tom Renney is teaching in these situations.  If Renney is teaching it, can anyone explain the positives behind giving up on odd-man situation in the center of the ice before the puck is dropped?