Yahweh is our salvation -
so why should we fear superior goal differential?
Yahweh is our light -
so why should we be afraid of the league's leading scorer?
When truly evil men march against us
to devour our rotting carcass,
when the drunkards drive to town in their Hybrid cars,
they will stumble and fall to a team of losers.
Though an army of Canuckleheads fill the seats of Rexall Place,
and stand to "Loooooo!" their team all night long,
our hearts must not fear.
Though they will spill beer on all of those seated around them,
and declare that Alex Burrows is a great goalscorer,
we must not be afraid:

Foolishness is not contagious and Yahweh is on our side.

Visiting Team Scouting Report: The Vancouver Canucks are a better team than I had expected this season. Their record in games decided by two goals or more is 21-12. Their record against teams with a goal differential of +15 or better (SJ, Chi, Pit, Buf, NJ, Wsh) is 4-2. Their goal differntial of +36 is third in the Conference and fourth in the NHL. They have the league's leading scorer in Henrik Sedin and one of the league's best goaltenders in Roberto Luongo. But a lot of those results are being driven by the percentages. The Canucks have a team PDO of 102.3. Now, as was mentioned, the Canucks have a phenomenal goalie so we might expect their PDO to be on the high side thanks to superior goaltending. In 2008-09 they finished the year at 102.0. In 2007-08 they finished up at 100.5. And they're ahead of the curve yet again. I think it's fair to say 100 is too low an expectation for these guys. That said, 102 is likely a little high. The goaltending I can accept but some of the shooting percentages on this team are crazy. Alex Burrows is shooting over 14% and Henrik Sedin is over 20%. These are numbers that I'd confidently predict to drop if they were "all-situations" but this excludes both empty-netters and the PP! The problem for the Canucks is that they're not a particularly strong outshooting team, besting opponents at EV 1092-1066. With the score close they're actually slightly outshot 621-596 but are saved by an astounding 103.4 PDO number. Now, there are other teams ahead of them with even worse underlying numbers (Avs!) but the Canucks also have a pretty tough schedule coming up. Here are the road and home games left for all of the teams in the Western Conference: 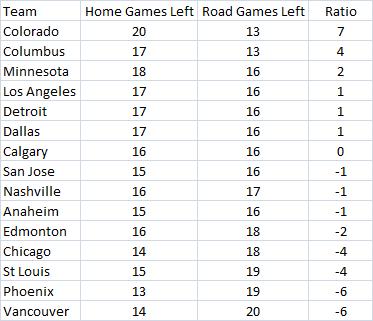 That's not great news for fans of the Coyotes and Canucks. Every team they're competing with for a playoff spot has a much better ratio of home and road games left. I'm not saying that the Canucks are going to miss the playoffs. They probably won't. But they're no sure thing either.