After a 6-0 loss to the Colorado Avalanche last night there isn't a lot of hope for the present for Oiler fans. Today, Lowetide responded by mostly ignoring the present and looking to a more hopeful future with the help of Gabriel Desjardins. I will be doing much the same, but instead of looking at what's to come in 2010, I'm going to follow yesterday's post looking at the forwards drafted in 2009 with a post that will look at those forwards who were drafted in 2008. I will again be using Gabriel Desjardins' NHL equivalencies which estimate the amount of offence we can expect a prospect to bring with him to the NHL from the league he's playing in today. After the jump, I'll take a look at the data.

Desjardins' equivalency numbers are based on the actual performance of players moving from one league to another season over season. Based on their historical performance, each league has a different equivalency number. What I've done in the chart below is taken each player's goals, assists and points, converted them to a "per game" rate, multiplied them by the league equivalency number, and then expressed them as an "NHL equivalency" assuming an 82-game NHL season. I've used this article for the translations from the NHL, KHL (multiply offence by 0.83), SEL (0.78), FNL (0.54), DEL (0.52), AHL (0.44), NCAA (0.41), WHL (0.30), OHL (0.30) and QMJHL (0.28). I've used this article for the translations from the USHL (0.27) and AJHL (0.16). As I said yesterday, I'm not completely sure if the equivalency numbers I'm using are the most up-to-date information but no one has said otherwise as of yet so I'm pressing on. If you know of If you of more current numbers than those found in the links above, please let me know and I'd be happy to run the numbers again.

A few explanations before I post the chart. As i noted yesterday, not all of the players drafted in 2008 are the same age. Several players had already passed through the draft at least once (and sometimes twice). All of these older players are included in the chart but are marked in yellow. I've also included any players who were drafted in 2009 but for whom 2008 was the year they were first eligible to be drafted. All of these players have an "ND" in the "Draft Number" column to indicate that they weren't drafted until 2009. Injured players are at the bottom of the chart marked in red. Some players are in a league that Desjardins doesn't cover (ECHL and European minor leagues); they are also at the bottom of the chart and marked in green. Anytime a player had played games in more than one league, I used only the numbers from the league he played in most often. Finally, the "Draft Number" column is not the player's actual draft position but the player's position among forwards. So, for example Jordan Eberle was drafted by the Edmonton Oilers 22nd overall but was the 11th forward to be drafted. As such, his "Draft Number" in the chart is "11." I broke the chart into three portions so it would be easier to read, but you can still click on it to enlarge. 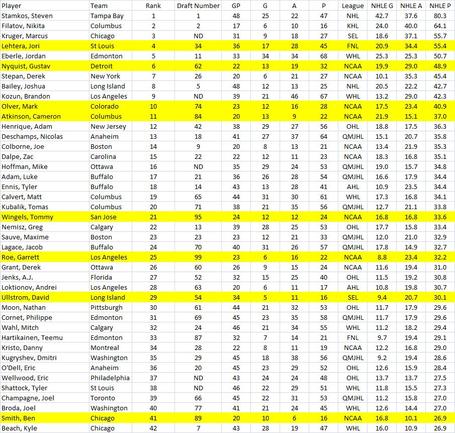 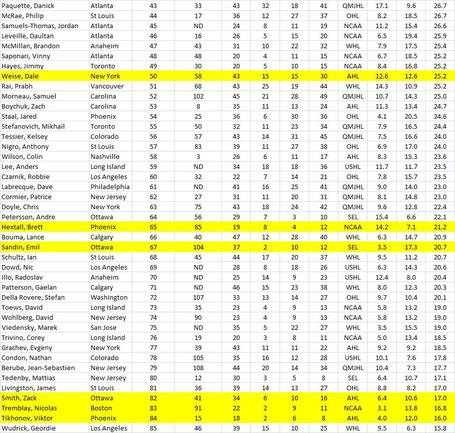 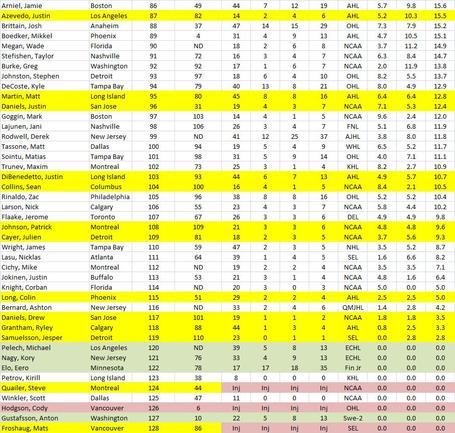 I think it's very interesting that two of the top ten and three of the top twenty players by this measure passed through the draft in 2008 and were then picked in 2009. Marcus Kruger, Brandon Kozun and Mike Hoffman all compare very well, not only to the draft class of 2009, but also to the draft class of 2008, i.e. players of the same age. One thing all three of these players have in common (other than their ability to bring offence) is their size. As you may have already guessed, all three guys are small. If I had to bet on one to make an impact in the NHL, I think it would be Kruger. Not only are his numbers the best of the three players, but he's also having that success against full-grown men in the Swedish Elite League.

On the other hand, of the first ten forwards drafted in 2008, only four of them make the top thirty in terms of offence. Stamkos and Filatov are both bringing offence at the level you'd expect (though Filatov has had some difficulties with authority in Columbus) and Josh Bailey's totals are actually in the NHL which makes them a wee bit more impressive (the only guys considered "NHL" players this year are Stamkos, Bailey and James Wright of the Tampa Bay Lightning who has 5 points in 47 games and was drafted in the fourth round). The Bruins are also likely very pleased with the progress of the 6'5'' Joe Colborne who has been a point-per game player for the University of Denver. That kind of size to go along with strong offence is a very good combination. But what of the rest? Well, Cody Hodgson and Anton Gustafsson have struggled with injuries, Hodgson this season and Gustafsson last season. Gustafsson seems to be having trouble getting back to his pre-injury level though with only 13 points in 22 games in Sweden's second-best league. Considering the Caps traded up to get him (and selected him one slot ahead of Eberle), this development must be wildly disappointing for them. Kyle Beach is similar to Colbourne in that he's a big kid. His offence is decent but it's somewhat concerning that he hasn't taken a step forward this season. The last three players are Mikkel Boedker (who played in the NHL last season when he probably wasn't ready), Zach Boychuk and Colin Wilson who have all struggled to bring high level offence at the AHL level. None of those three are done as prospects for sure but I'd imagine the Coyotes, Hurricanes and Predators were all expecting a bit more.

So how about the Oilers? Look at that Jordan Eberle. I know it's been said in the past that one should expect a big junior season when the player is two years removed from the draft but it's hard not to be impressed. There are 51 players on this list playing in the CHL and Eberle is destroying every one of them. That's got to count for something. Size and footspeed were concerns on draft day and likely still are, but he was highly rated despite those things and he's now passed a slew of guys that were ahead of him offensively on draft day. It's hard not to be happy. The other Oiler picks are also showing well, in that they have a chance. Both Philippe Cornet and Teemu Hartikainen have moved up the chart big-time relative to their draft class and can both be considered legitimate prospects. The Oilers only drafted three forwards in the draft but all three are now in the top thirty offensively among players born between September 15 1989 and September 15 1990. Slava Trukhno stands as a warning signal, but it would take a terrible reversal of fortune for this 2008 draft to look bad for the Oilers.

Another team that picked up some nice offensive guys late is Columbus. In addition to Filatov, the Bluejackets have Cameron Atkinson (6th round), Matt Calvert (5th round) and Tomas Kubalik (5th round) in the top twenty. Atkinson is tiny and was taken as an overager (though not by much, his birthday is in June of 1989) so you can see why he was taken so late. Calvert has similar concerns (size and birthday (December 1989)) but at least he can score. Kubalik is a bigger player, but apparently his skating is an issue. Still, three picks in the 5th and 6th round and three players who can bring offence is a nice draft.

The most interesting draft probably belongs to the Islanders. They traded down twice (68th OV and a second in 2009 from Toronto and then 40th OV from Nashville) before settling on Josh Bailey with the 9th overall selection in the draft. That's a nice haul in terms of strategy and looks inspired since they seem to have been right about the player too. They then took Corey Trivino and David Toews who are both struggling in the NCAA, followed by Kirill Petrov who has yet to score in the KHL (and is thus at the very bottom of the list) but had 10 points in 6 games for Russia in the WJC's. They closed out their forward picks with three overagers, one of whom (David Ullstrom) is having a pretty good year in the SEL.

Next up is 2007, but that's probably as far back as I'll go. At some point you want the "E" at the end of NHLE to disappear.