Some people started bringing members of one of the youngest teams in the NHL to Jesus to have him touch them so that they could be blessed after a season of trials. When the Oilers - who were diligent followers of Jesus - saw this, they started to rebuke these people. But Jesus called the Avalanche to him and said, "Let these poor souls come to me, don't hinder them. This season, God will smile upon this pathetic team that really ought to be terrible. Then, maybe you will learn your lesson. For I am telling you the truth, anyone who believes they deserve God's favour will be humbled, and those who are humble - though on skill alone they merit losses - will enter the kingdom of playoff hockey."

Visiting Team Scouting Report: The Avalanche continue to defy the naysayers and hang around the top of the Western Conference. Sort of... since my birthday (October 29th) - when the Avalanche were leading the Conference at 10-1-2 - the Avs have slowly come back to the pack, as the following chart illustrates: 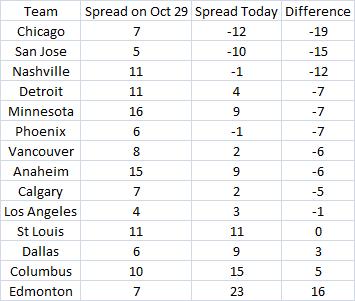 They're losing ground to almost everybody. From November to today they've tied St. Louis for the fourth least points accumulated. Without those first thirteen games this team is barely above .500. Their consolation might be that the Kings haven't been much better, while the Ducks and Wild had such poor starts that they may not be able to catch up. They could still make the playoffs, but it will be awfully close and I wouldn't put any money on them taking the Northwest division.