The 2009 draft has come and gone.  Those who spoke excitedly of Tavares, Hedman and Duchene now whisper the names Seguin, Hall and Fowler.  With the Oilers only two points out of dead last it's hard not to join in, especially with Jonathan Willis having already started prepping us for the big day (and don't forget part two).  Nonetheless, I thought it might be interesting to look back on the 2009 draft that was.  One of my favourite tools in evaluating prospects is Gabriel Desjardins' NHL equivalencies, though personally I think it's a lot more relevant for forwards than it is for defenders (and goalies!).  The basic premise is that we can expect each player to bring a portion of his offence with him from the league he's currently playing in to the NHL.  After the jump I'll explain a bit more fully and look at what each of the forwards drafted in June of 2009 has done so far this season.

The numbers I've used for equivalencies come from two main sources and, to be perfectly honest, I'm not completely sure if this is the most up-to-date information.  If you (my dear reader) happen to know of more current numbers, please let me know and I'd be happy to run the numbers again.  At any rate, each league has a different equivalency number.  What I've done below is taken each player's goals, assists and points, converted them to a "per game" rate, multiplied them by the league equivalency number, and then expressed them as an "NHL equivalency" assuming an 82-game season.  I've used this article for the translations from the NHL, KHL (multiply offence by 0.83), SEL (0.78), FNL (0.54), AHL (0.44), NCAA (0.41), WHL (0.30), OHL (0.30) and QMJHL (0.28).  I've used this article for the translations from the USHL (0.27), AJHL (0.16) and BCHL (0.14).

Before I go ahead and put up the chart some brief explanation is needed.  Firstly, not all of the players drafted in 2009 were the same age.  Several players had already passed through the draft at least once (and sometimes twice).  All of these older players are included in the chart but are marked in yellow.  Injured players are at the bottom of the chart marked in red, along with Brad Peltz in gray.  Peltz is a special case since the Senators have left him to play Canadian high school hockey for another season and it's possible that he was only drafted because his father is a billionaire.  Finally, the "Draft Number" column is not the player's actual draft position but the player's position among forwards.  So, for example Magnus Paajarvi-Svensson was drafted by the Edmonton Oilers 10th overall but was the 7th forward to be drafted.  As such, his "Draft Number" in the chart is "7." I broke the chart into three portions so it would be easier to read, but you can still click on it to enlarge. 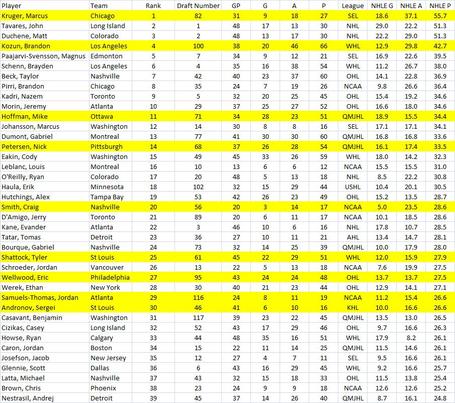 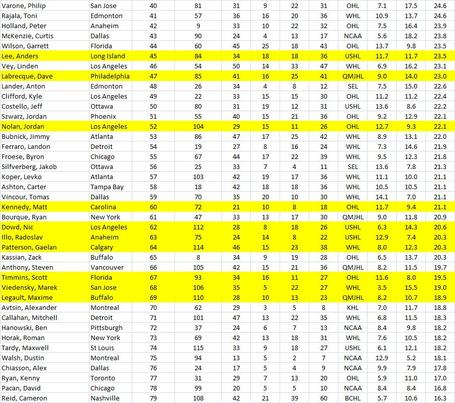 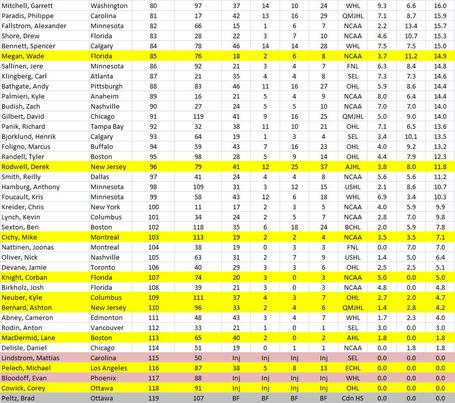 A couple of things stand out to me on this chart.  The first is that no overage players were taken in the first forty forwards and only two of the top sixty forwards taken were overagers.  And some of these players are certainly legitimate prospects.  It makes me wonder if it wouldn't be a good strategy to take the top overager on your list in the third round.  It looks to me like doing so would give you a very good chance at getting a top-thirty offensive player in the draft.

As for the two overagers near the top of the list, Marcus Kruger's big season in 2009-10 is somewhat surprising.  Kruger's 2008-09 was his 19 year-old season and taking that year to compare him with the rest of the list would leaves him in the bottom half (17.1 NHLE points).  He's clearly taken a huge step forward but there's a very good chance many of the guys behind him now will pass him by next season.  Brandon Kozun, on the other hand, had a very good season in 2008-09.  Kozun's 2008-09 NHLE of 36.9 points would leave him in a tie for 7th on this list.  He's taken a small step forward again this season and should clearly be looked at as a legitimate prospect going forward despite his small stature.

So far, Brandon Kozun is looking like a good draft steal by Los Angeles Kings.  Brandon Pirri (Chicago) and Taylor Beck (Nashville) also look good by the numbers.  The Washington Capitals are probably very excited with all four of their players beating their draft number and three players cracking the top forty forwards despite only selecting once in the top forty.  The Colorado Avalanche must also be very pleased with the two forwards they selected.  On the other hand, Chris Kreider is way off the pace of any other first round forward (apparently Hugh Jessiman didn't teach the Rangers a thing about trusting US high school hockey).  At the team level, the Florida Panthers don't seem to have had a very good day (aside: if you're an Oiler fan, no matter how bad things are now, look at the Panthers over the last decade before you say they couldn't get worse)

Four men on this list are already playing in the NHL and of those four, three seem to be doing fine.  The one exception is Evander Kane who seems to be struggling mightily at the NHL level relative to the other forwards taken in the top ten.  Even without taking the salary cap implications into consideration, it seems like it was a bad idea to keep him in Atlanta.  Once those are factored in, the decision is just plain awful.

The Edmonton Oilers prospects are tracking quite well.  Magnus Pajaarvi-Svensson is doing very well offensively which is exactly what the Oilers will need out of a top ten pick.  Toni Rajala is beating his draft number so far.  He doesn't look like an impact player offensively which is too bad since he's the kind of player that will likely need to be impactful offensively to have an NHL career.  Anton Lander is the exact opposite situation.  His offensive numbers are not covering his draft number but he seems to have the kind of skill set that may get him to the NHL anyway.  There's also a possibility that the SEL is better than it's being given credit for.  Other than Svensson and Marcus Johansson, all of the Swedes taken in the first two rounds have taken a hit.  Which should only make Oiler fans that much more excited about Magnus.  Finally, Cameron Abney wasn't drafted for his offence but that was just a terrible draft pick (given the state of the Oilers, I thought that I should end on a sour note).