Share All sharing options for: An update on Timrå, Anton Lander & Magnus Pääjärvi-Svensson 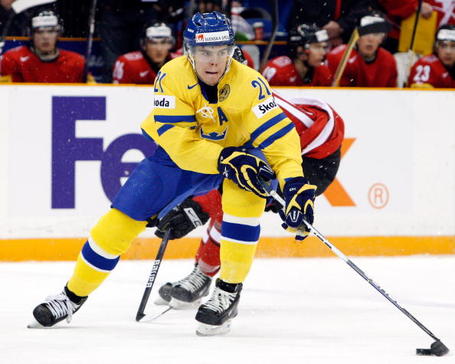 It's been a few weeks since the World Juniors and Anton Lander and Magnus Pääjärvi-Svensson is back with Timrå in the Swedish Elite league. Just like the Oilers the team is in the bottom of the league, but whereas the Oilers might get Taylor Hall as a consolation prize, Timrå is actually facing relegation from the top league.

Thursday's game was an extremely important game as they faced Rögle, who also is in the middle of the race to avoid relegation. Alas the game wasn't one of the most entertaining games I've seen, but both teams came out scrapping but it showed that the game meant a lot as some players seemed a little rattled at first.

Rögle had the most puckpossesion, but Timrå had the better chances in the opening stages of the game, the game kept flowing back and forth until the 3rd period when Timrå scored twice to win the 2-0.

Anton Lander and MPS started out per usual on the 2nd line together, there have been reports that they've looked sluggish after the WJC and Pääjärvi has himself said that he's been waking up in the middle of the night clearly affected by the change in timezones. Another issue has been the adjustment in play from the offensive play of the national team and the more defensive play of Timrå.

MPS  had a really good game, I was especially impressed by his backcheck and physical play in his own zone. He played with great gusto throughout the game and was rewarded by being promoted to the 1st line for the 3rd period. Once again he showed proof of his blazing speed and drow free to the net on a few occasions, sadly lacking that final touch so unfortunately he didn't end up on the scorers sheet. He really needs to work on his ice vision though, as he has a tendency to put his head down on those drives and there was at least one time that he had an open teammate with a better position. But these things will hopefully come with age and experience.

Lander had his usual blue collar game, good on the faceoffs and played smart throughout especially on the defensive side of the puck. He played on both the PP and the PK but his play didn't stand out like Pääjärvis. I think Lander might be suffering a bit more from fatigue as he looked a little sluggish at time.

Saturdays game was against one of the leagues best teams; HV71. In a fast & furious and extremely entertaining match Timrå came out on top 4-2. Timrås coach Charles Berglund had promoted Magnus Pääjärvi-Svensson to the 1st line for this game, a move that paid out well. The line stood for 2 of Timrås 4 goals and MPS notched an assist on the second goal. All game long Pääjärvi drove the net hard and played with great intensity. These two games have really shown MPS at his best, he still has areas to improve but his strong play in the WJC has truly carried over to the Elite league.

Lander played on the 3rd line today, and also added an assist to score sheet. This is getting tiresome to write (but in a good way), but he had another solid game, and continues to do all the little things right. He was huge on the penalty kill, with good physical play. He also had a much better offensive game, but did miss a gimme.

I will watch a 3rd game on Thursday as Timrå faces Peter Forsbergs MODO in another crucial game in the fight to avoid relegation. After this game I will have a summary on all 3 games. But so far things are looking real good!