The Oilers begin due diligence in Oklahoma City

Share All sharing options for: The Oilers begin due diligence in Oklahoma City 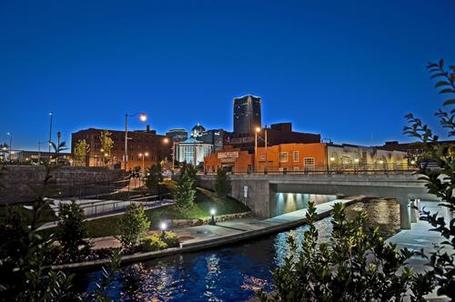 I had a conversation with Oklahoma City Mayor Mick Cornett three weeks ago.  During that conversation we talked about the possibilities of an AHL team in Oklahoma City as well as the arena lease that the new ownership group, Prodigal Hockey, had signed.  We discussed the outstanding hockey market in the area and the now-defunct Oklahoma City Blazers, a CHL team that drew 8,000 fans per game.  We danced around the topic of an Edmonton affiliation, though it has been rumored since July, because nothing was set in stone.

Now comes word that an Edmonton-area marketing firm is doing some due-diligence in the Oklahoma City market.  OKC Slackers, the only forum dedicated to Oklahoma hockey had a couple of posts up yesterday afternoon with reports of former Oklahoma City Blazers season ticket holders receiving phone calls asking them to take a survey about pro hockey in Oklahoma City.  Users reported many questions about preferences, including the name of a new team, with the survey taker suggesting Oil-based names like "Oilers" and "Oil Cats".  The firm doing the surveys claims that they are not affiliated with the Edmonton Oilers, but that they were simply hired to do marketing research about the possibilities of professional ice hockey in the Oklahoma City area.

Combine this with the debut of Prodigal Hockey's new web page and it looks as if though AHL hockey with an Edmonton affiliation in Oklahoma City is imminent.