On Tanking - This Time it's Experiential

Share All sharing options for: On Tanking - This Time it's Experiential

Tanking is awful.  It's terrible.  It's plain old not fun.  And for this season's Edmonton Oilers, it's necessary.  Think about that for a second: the Edmonton Oilers are undisputably better off if they lose the majority of their games from now until the end of the season.  I don't blame fans or management for hoping the team loses once they've fallen out of the playoff race but when Bruce McCurdy is (correctly... sorry Bruce) taken for a fool when he cheers a five-game winning streak in December, it's my opinion that the league is broken.  The problem, of course, is the way teams are awarded draft picks.  After the break we'll briefly outline the anti-competitive draft formula as it stands and offer one  possible solution.

Right now the picks are awarded in reverse order of league standings points (30th place gets the 1st overall, 29th the 2nd, 28th the 3rd etc.) and then is adjusted by a draft lottery.  The team finishing in dead last has a 48.1% chance at winning the draft lottery and no team can move down more than one spot or up more than four spots in the draft because of the lottery.  Those are the basics.  The top picks go to teams that have carefully managed to consistently lose a great deal of games.  How is that anything but utter foolishness?  How is it anything but contrary to the very nature of sport?

I'm not saying that there is a massive problem with players actively throwing games since they have strong personal incentives to perform as well as possible.  Guys like Robert Nilsson and Ryan Potulny are playing to stay in the NHL and, frankly, the last thing they need is a young hot-shot who's expected to step into the lineup next season.  These guys are clearly going to be trying as hard as they can to play as well as they can.  On the other hand, there are players like Shawn Horcoff.  He knows he has about five years left in Edmonton and that he's in no real danger of being bought out or sent to the minors based on his performance this year.  His no-trade clause is still in effect.  It makes all the sense in the world for him to try to get a player on this team that helps them most over the next five years since this year is a write-off.  By all accounts, Shawn Horcoff is an intelligent person.  How does he answer if someone says, "Shawn, even if the team goes 25-10-3 for the rest of the year, you'd still only have 90 points and would likely miss the playoffs.  Given the unliklihood of performing any better than that, isn't the team better off to lose and get a higher draft pick that can help you win in the future?"  What the hell is he supposed to say?  No?

So what's my suggestion?  I still think that the league needs to strive for some parity - you shouldn't give the team that finishes with the best regular season record the first overall pick - but I'm also resolutely opposed to a team being rewarded for being the aboslute suckiest of the suck.  I would suggest the way to combat this is with a different lottery system that gives the team with the most points but who still missed the playoffs the best chance at the first overall pick when determining draft order.  I would hope that there is significant enough interest in making the playoffs that you wouldn't see teams on the cusp of the playoffs tanking their final game or two to make sure that they don't make it but just in case, I would structure the lottery such that no team has particularly good odds of winning the top pick with no limit on how far you can rise or fall in the lottery.  My lottery would include 105 balls and would be structured as follows: 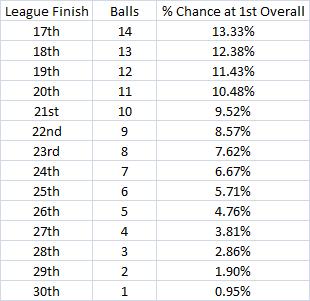 Balls are selected until each team has been selected once.  The teams draft in the order they are selected.  The system that's used now for the last 16 selections would remain the same.  I think this system is successful for several reasons.  The first is that it's more random.  Fans generally won't know where they're picking in the draft until the lottery itself which would make the lottery a potentially televisable event that would hold it's own excitement.  Second, it rewards the teams that are trying to win and empowers fans to actually cheer for their team all season long.  I know that I found the 2007-08 Oilers disheartening but it was actually fun to cheer on their improbable run toward the playoffs (they didn't have their own draft pick).  If the Oilers go on a similar run this year their will be weeping and gnashing of teeth.  How wrong is that?  Third, it removes any mixed motives away from the players.  The players likely won't be thinking much about the draft except that there would be a general awareness that everyone in the organization wants them to win as many games as possible.  This is a good thing.

I think this system would be successful and much easier to organize/collectively bargain than a run-off tournament from the teams who miss the playoffs at the end of the year.  But whether they go with this system or another one, they need to make a change.  The current system is depressing as a fan and rewards failure.  And as an Oiler fan, I see failure rewarded in my hockey club far too often.