Share All sharing options for: The Prodigal Son (and his dad) Return to Edmonton - Comrie is Back

In a not-so-stunning move, the Edmonton Oilers have signed Mike Comrie to a 1 year contract for $1.125 million.

Jonathan Willis took a look at Comrie by the numbers here, and it doesn't paint a pretty picture.  He's certainly not the veteran tough minutes center that the Oilers need, and if he struggled in the East, he will get steamrolled in the West.

"Aside from his powerplay ability, Comrie can also put up points 5-on-5, although he hasn't for the past two years; I tend to think his even-strength results vary greatly depending on the calibre of player he's lined up against.  He needs relatively sheltered minutes..." 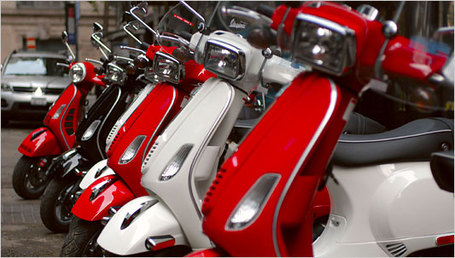 Clearly, he's not the answer at center, so might he be playing somewhere else?  Bob Stauffer is reporting that Comrie has been likely targeted to play left wing for the Oilers.  Comrie is unable to play a tough minutes role, so he won't play with Fernando Pisani or Ales Hemsky.  That leaves Sam Gagner's left wing, which means the candidates for Gagner's wing now include Dustin Penner, Comrie, Robert Nilsson, Andrew Cogliano, and Patrick O'Sullivan.  There are four extremely small, non-physical forwards already on the team and circumstances dictate that they have to play the same minutes as Comrie.  Toss in Marc Pouliot and Gilbert Brule and signing Mike Comrie is like buying a second or third Vespa.  It's an uncomfortable non-luxury that makes no sense.  The team has had size and grit issues for a few seasons, and adding Comrie only highlights that issue.  Early reaction has been "this signifies a trade", but sending out a small forward only gets the team back to where they were last year - small and lacking toughness - but with a new Vespa, rather than the old one.