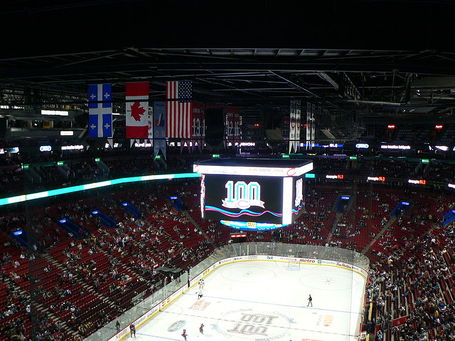 Edmonton Oilers' president and CEO Patrick Laforge went through a rather long and gruelling press conference today to help answer questions about a proposed new arena in Edmonton.  I'm an agnostic on the issue; it will certainly benefit Daryl Katz's bottom line and thus hhelp the team, but quite possibly at the expense of a lot of public money (which, as a British Columbian, I won't have to pay).

In any case, if a new arena is to be built, I'd like to see a gargantuan facility (like the Bell Centre, pictured above) that rivals the best and biggest in the NHL.  I'm sure I'm not alone, but based on what Patrick Laforge said today, it doesn't seem likely that the new arena will be the biggest one out there.

The following is an exchange between CTV reporter Dave Mitchell and Laforge, from the press conference today:

Dave Mitchell: You talk about this being the best – you use words like making a city "great", "greatness" and "improving a city" and "making it world class". We know Daryl doesn’t do things small, and the hardest ticket in town is usually the Oilers. It’s tough to get in here sometimes for families and people. Is there a chance to make a statement here and make this one of the largest buildings in the National Hockey League – bigger than Calgary, maybe as big as Montreal. Do you want to make it the biggest and put 21,000 people in here – 5,000 more than now? Can you do that? Is that feasible, and is this where you’re going?

Patrick Laforge: The group that’s working on the architectural design is challenging the architect to say, "what is ideal for a hockey crazy city and an entertainment facility that needs to not only service hockey and junior hockey but also to service about 100 nights of concerts and things – what’s the ideal size and how does it range?". In the design group that I’ve talked to and met with, you can only see the puck from so far away. There is a limitation to the number of rows in the bowl no matter how you shape it, and after a while it becomes blurry. There is a limitation of natural humans, but I think we’ll stretch the imagination to do what we can.

Dave Mitchell: But in Montreal there’s 21,000 and it’s a downtown building and it goes straight up – I’ve been to the top there. It’s not bad, they have a huge video screen of course, but do you want to say 20,000?

Patrick Laforge: I’d say Montreal’s got a great facility and lucky them. We’re not leaving the door closed. I’ll say this Dave – it won’t be smaller. Small isn’t the advantage here. There’s also talk of even better designs that can lift, as you say, straight up and we’ll see. But it won’t be smaller.

When Laforge talks about the arena not being smaller, it seems pretty clear that he's comparing it to Rexall - which, with a capacity of 16,839 is the second smallest arena in the NHL (only the outdated Nassau Colliseum is smaller).

I am a little curious as to why the Oilers wouldn't look at Bell Centre as a comparable - there's certainly enough demand for hockey in the city - but based on Laforge's comments ("I'd say Montreal's got a great facility and lucky them") it doesn't seem to be in the cards.

It's really too bad - if the team and city are committed to spending a ton of money (an estimated $450MM) on a new arena, they might as well build the biggest one out there.

Also of interest: David Staples has his piece up on the press conference, including a translation of the other item that jumped out at me:

LaForge, speaking on the future of Rexall Place.  "Our lease expries in the spring of 2014. ... We're a tennant here and we don't own the building so I can't offer speculation on what might happen to it. But it's been a great building and it still is."

Translation: It's not our problem.