Share All sharing options for: A Book Review:  Black Ice

George and Darril Fosty spent years researching the emergence of hockey in the black communities of the Maritimes and then poured their hearts into publishing Black Ice: The Lost History of the Colored Hockey League of the Maritimes, 1895-1925

. The title leads the reader to believe that the book will simple tell the story of a colored players hockey league, but in the early chapters it's obvious that the Fostys are doing much, much more in these pages. In fact, game play itself combines to make up just a few chapters. 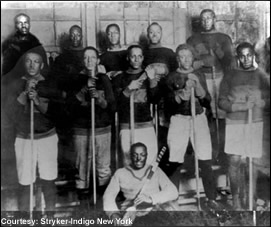 Black Ice is a history of the establishment of the black population in maritime Canada, their towns, their culture, their churches, and their game -- hockey. Born out of the descendants of run away slaves from the United States and the displaced Maroon Colony of Jamaica, The Colored Hockey League of the Maritimes was created in 1895, and enjoyed a thirty year run as a successful league, though always in flux. Teams like the Amherst Royals, Truro Rangers, Halifax Eurekas, West End Rangers, Africville Brown Bombers, Yarmouth Hockey Club, Africville Seasides and the New Glasgow Speed Boys played some of the best hockey of the era, even though the all-white teams wanted nothing to do with them, and in cases, refused to recognize them, let alone accept their challenges.

The Fostys do a great job of recreating the history of the black population's plight in Canada, including overcoming deep-seated racism (even from Lord Stanley himself) after escaping slavery in the United States. Black people were said to be averse to the cold, too stupid to understand the concept of team sports and lack the sturdy legs necessary to skate. In fact, members of the aforementioned teams were reputed to be some of the fastest skaters in Canada, and the style of hockey they played was team-oriented, hard and fast, much faster than fans had become accustomed to, with innovations that included the slap shot. Yes, the slap shot was invented in The Colored Hockey League. The reconstruction of game accounts is wonderful and the manner of scheduling games via "challenges" hearkens to playground pickup games and pond hockey played throughout the continent.

More importantly, the authors take the reader through both waves of black emigration into the Maritimes, establishment of Africville, the center of black life in the Maritimes, and the reasons behind the creation of the league. They do an outstanding job of explaining the culture of the Maritimes, built through all-black churches and all-black schools, and the ascendancy of well-known black leaders of the time. The struggle against institutional racism that these Maritime communities battled from the time of settlement through to the bitter end was central to the development of their culture and the league. It was surprising to me that this sort of racism even existed in Canada at the time -- it's well-known that it was the pervasive attitude in the United States, but this part of Canadian history doesn't get the same treatment.

Personally, the book was compelling because the Fostys managed to bring these historical figures to life. The words of the leaders of these black communities resonated long after I was done reading. The struggles of the communities was made real by the authors. The stories about each of these teams created visuals that pulled me deeper into the story. The game recaps jumped off of the page as the background that the Fostys provided helped my imagination fill in the cracks. Though separated by a century and 2,100 miles, the storytelling allowed me to create a connection with these long-forgotten men and women.

Black Ice: The Lost History of the Colored Hockey League of the Maritimes, 1895-1925 is a must-read for any hockey fan or historian. The Fostys did these people and their descendants a mitzvah in researching and compiling this account of an amazing history. It's a history that should not be forgotten.

Below is a short ESPN segment on the book: