Share All sharing options for: Shot Distance vs. Shooting Percentage 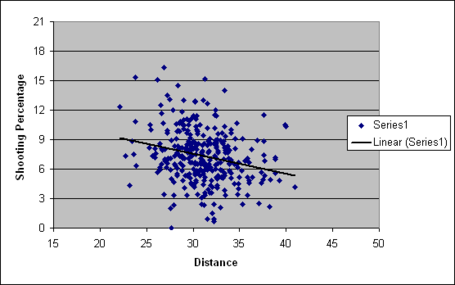 The chart above is the 5-on-5 shooting percentage vs. shot distance data for every NHL forward who appeared in more than 20 games last season and averaged more than ten minutes per game (courtesy of BehindtheNet).

Unsurprisingly, the trend line shows that players who wait until they're closer to the net to shoot have a better shooting percentage as a general rule.  What was a little surprising is how outlying the outliers were.

Blue Jackets fans might want to note that the top player on this list is Derick Brassard.  I've ceased making predictions about shooting percentage sustainability for rookies (Andrew Cogliano taught me that) but it is worth noting. 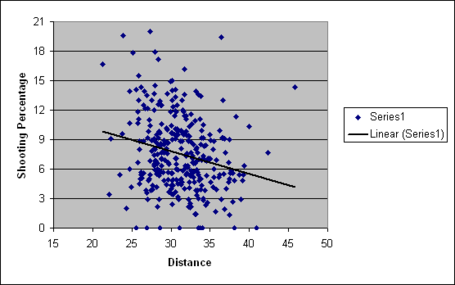 The outliers in this case are even more erratic; it seems to me that it's likely a result of sample size.

The one thing I have concluded: any attempt at measuring shot quality must not know where a shot was taken from and what type of shot it was, but also who was doing the shooting.  There are massive variations in shooting percentage between players who generally are the same distance from the net when they fire; variations much larger than I would have expected to see.