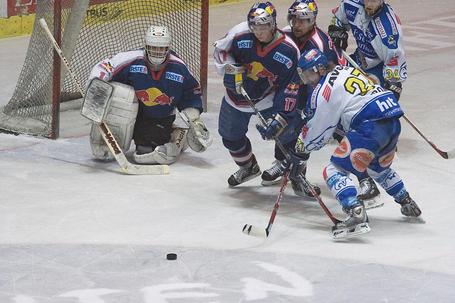 Admittedly, this isn't Oilers' news, but I couldn't let it pass by unnoticed.  Arturs Irbe (pictured above, showing just how small a goaltender can look) was one of my favourite NHL'ers during his career and a guy I've always cheered for.  He was mostly a middling goaltender capable of getting very hot, and he went on two lengthy playoff runs, with San Jose and with Carolina.

He was also famous for his ugly face mask and beat-up pads.  He used the same pads his entire career, stitching them himself when they were torn.  Like most goalies, I can't imagine him as entirely sane.

Irbe's previous job was as the goaltending coach with Riga Dynamo, where he did an admirable job trying to get by with Sergei Naumov before the team picked up Martin Prusek for the second half of the season.  Prusek went 11-6-2 with a 1.70 GAA and .941 SV% to finish the season for Riga.

Irbe will have an important role in Washington; Semyon Varlamov is a tremendous prospect and Irbe will also have to try and get the most out of Jose Theodore.  I hope he does well.