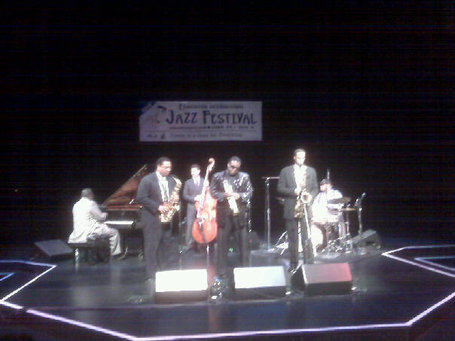 It doesn't take much to get me thinking about hockey. On Saturday night I attended a concert of the outstanding Edmonton International Jazz Festival, featuring Jimmy Cobb's So What Band . The only surviving member of the Miles Davis sextet that recorded the landmark album "Kind of Blue" in 1959, the 80-year-old Cobb is currently barnstorming on a 50th anniversary tour of that seminal recording in an ensemble that features the exact same intrumental line-up. As the band took the stage and broke into the lead-off track "So What", I was doubtless the only member of the packed house who noticed a superficial resemblance between the sextet and a hockey team. Of course "Miles Junior" and his trumpet was front and centre, flanked by alto and tenor saxes on the wings ("Young Cannonball" and "The Next 'Trane"). While the front three drove the attack, they were backed by an outstanding rhythm section including a pianist with an excellent  transition game who could jump into the melody at times, the rock-steady stay-at-home drummer and team captain, with the key man on any team, the bassist, between the pipes at back centre. So while my body got into the groove of the music, at least one channel of my ever-wandering mind got sidetracked on a sextet of hockey questions of the day.

So what were the last three years all about anyway?

Since the trade of Chris Pronger for "magic beans" the Oilers have been selling their fan base on a youth movement. We have watched the often-painful growth of a large group of under-25s stumbling through today as they gain experience for tomorrow. In some ways the investment of the fans is similar, as they develop allegiances to the young guys in anticipation of long careers as Oilers. Sure a piece here (Joffrey Lupul) or there (Matt Greene) has moved along in the ever-evolving process of roster-building. This summer, however, that has become a full-fledged trend with the dumping of Kyle Brodziak for a bag of pucks, and the apparent trade of Dustin Penner, Andrew Cogliano, and Ladi Smid for the right to grovel at the feet of Dany Heatley. While Heatley's goals are tempting, the rest of the package leaves me cold, both in what is (theoretically) coming and going. Here's the investment in terms of at-bats over the past three years given to the guys leaving town :

That's four regulars and over 600 GP just from 2007-09. All of the above were nicely positioned to become positive difference makers, only to shipped or shopped for low-return picks and a recalcitrant sniper. After 2-3 years of waiting for these guys, it seems an odd time to be running out of patience and dealing for a guy with apparent attitude and entitlement issues and a gigantic cap hit whose best years may well be already behind him. In particular, the Brodziak deal which I questioned in this space last week, looks even more suspect given the subsequent attempted off-loading of three young players and two more good-value contracts for a guy who does nothing to solve the gaping hole at centre.

So what is the status of the three guys dangled for Heatley?

Who knows? It took Steve Tambellini 72 hours to acknowledge the tough position they are in and to complain about the leak of their identities in a deal which had/has not been completed. Obviously there are (highly unusual) circumstances beyond the Oilers' control, but with Tambellini expressing continuing interest in Heatley these three youngsters have been pretty much hung out to dry for the foreseeable future. If the trade does fall through -- as I fervently hope it does, and the sooner the better -- there will be considerable fence-mending required.

So what happens if Smid, an RFA, signs an offer sheet with a third club?

Good question. Oilers might be forced to match to keep their Heatley package intact, but the terms of the contract might make Smid more or less desirable from Brian Murray's point of view. It might make sense for the Oilers to file for arbitration but that deadline is coming up fast.

So what happens if Ottawa raises the ante in light of Heatley's July 1 $4 MM "bonus"?

I can't see the Oilers taking on yet more salary as a form of reimbursement. Money paid and cap hit are two different things, and the Oilers would be saddled with the entirety of Heatley's cap hit regardless of who writes the actual cheques. Given that Heatley makes more than Penner, Cogliano and Smid combined; that the Oilers would have to pay at least two replacements on the NHL roster; that the Oilers already have too many overpriced depth players in the bottom six and third pairing; and that the Oilers are already hard against the cap, it doesn't seem to be a workable solution. Sweetening the pot to include further draft picks or prospects in addition to the three solid young NHLers already being offered makes a bad trade even worse IMO. My temptation would be to reduce the offer if anything; the trade as it stands already goes a long way towards alleviating Ottawa's cap situation.

So what does Steve Tambellini do in the meantime?

Hard to say. He doesn't know if he's looking to find a sniper, or looking to fill depth positions. Either way, he needs to find a veteran centre who can check and win a faceoff, an existing hole on the club made deeper by the riddance of Brodziak. Hard to imagine this isn't a priority matter, but it doesn't seem to be to this point.

So what now for Oiler fans?

No clue. It's a new regime with new ownership, new management, new coaching, a few to a lot of new players, and a new philosophy which is prepared to write off lots of past development for a quick "fix".

The whole thing leaves me feeling kind of blue.