Your Contest Winner & More On Context

Share All sharing options for: Your Contest Winner & More On Context

The very-bright and must-read RiversQ won our guessing game, correctly identifying the graph below. For his troubles, RiversQ wins a copy of  Black Ice: The Lost History of the Colored Hockey League of the Maritimes, 1895-1925

, a book I plan on reviewing here in the near future. 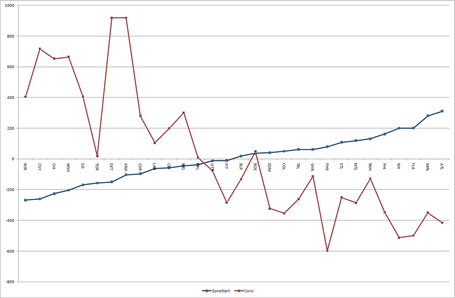 As you can see, the red line indicates team Corsi value and the blue line indicates team ZoneStart, or (Defensive Faceoffs-Offensive Faceoffs).  Why is the above graph important?  Because it brings context to these two advanced statistics  -- they are inversely related.  This holds at the team level as well as the individual level and has a large impact on individual performance as well.  A line that gets buried in their own end impacts the next group of gentlemen coming on to the ice.  In Phoenix last year, Lisin, Turris, Lindstrom, Jovanski and Morris got the benefit of starting in the offensive zone quite often last year.  They couldn't hold ground and ended up in their own end more often than Kurt Sauer, Zybnek Michalek and Martin Hanzal would have preferred.  Those in the latter group were made to charge uphill all year long thanks to their teammates inability to hold or gain ground.

Jim Corsi has already spent a lifetime in hockey.  The one-time goalie for the Edmonton Oilers, he looked exactly like Mr. Kotter then, began a shift in the way in which hockey was analyzed while coaching for the Buffalo Sabres.  He invented the Corsi number, which put simply, is the total of all shots at net for and against while a player is on the ice at even strength.  Shots directed at the net includes blocks and misses.  The stat was a revolution in that it began a trend of bright fans looking at the underlying numbers within the game, rather than basing assumptions on the results.  Brokers, poker players and mathematicians all know that results-oriented thinking is for the weak, and Corsi helped push a whole bunch of hockey geeks in the right direction.

Corsi is far and away the best stat we currently have to measure territoriality.  There is no questioning this.  However, a general lack of understanding about what Corsi means, and a lack of context for game situations has led Corsi to be used incorrectly in a number of quarters.  It's encouraging that the language is more common and the stats are being analyzed and that there is a general move towards using these numbers, however using them incorrectly, or without context leads to misunderstandings concerning the value of the metric.  Does a list of the 20 worst Corsi Values matter?  Yes, but in a very narrow sense.  The 20 worst Corsi values only shows which 20 players faced a ton of shots in their own end.   It doesn't account for ice time, and that's why Gabe Desjardins' Behind The Net provides the useful Corsi/60.

Does a list of the 20 worst Corsi/60 values mean anything on it's own?  Again, yes, but it provides minimal value without context.  It's a raw list of people that spent the most time in their own end.  It doesn't account for where these players started on the ice.  Marc-Andre Bergeron and his 6.7 Corsi/60 can't be compared to Nick Schultz' -14.4 Corsi/60 even though they are on the same team.  Why?  Schultz started in his own end of the ice 327 more times than Bergeron.  Bergeron started in the offensive zone 227 more times than Schultz did.  Because of this differential, Vic Ferrari invented Zonestart, a number that measures the starting point at faceoffs for players at even strength.  Vic also came up with a metric he calls Zoneshift, which is a measure of ZoneStart and ZoneEnd - it shows which way the puck is going when a person is on the ice.

Does a raw list of players grouped by Zonestart and Corsi/60 have meaning?  Yes, certainly more than the raw Corsi numbers.  However, this list doesn't tell us who these players were playing against on the ice.  A player can be put on the ice in good situations against weak competition like George Parros in Anaheim, or he can be put out in the defensive zone against the best competition like Shawn Horcoff.  If they happen to have a similar Corsi values, it's an error in grouping, not because they are similar players. Context matters when it comes to comparables.  Fans instantly recognize that comparing the best Bettman-puck era player to the best player in the 80s has to happen with an adjustment in traditional stats because Bettman-puck scoring rates were down so sharply.  Using a change in scoring rates over an era when creating a comp is putting it in context.  The existence of microstats doesn't change that - there must be some context to the comps.