Your conclusions were all wrong, Ryan...

Share All sharing options for: Your conclusions were all wrong, Ryan...

A fellow who calls himself PuckStopsHere at Kukla's Korner made an entry on the worst CORSI values in the league.  He writes a lot of words, tries to arrive at some conclusions, says some things about puck possession and time on ice.  Captain Ramius says it best about the article.

These lists are made for rebuttal by the work that Vic Ferrari did.  Let's resort the bottom 20 guys by the difference in starting point: 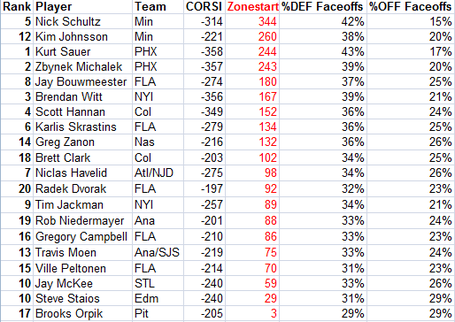 A resort on % of faceoffs taken in the defensive zone.  Note that the league average is 30%. 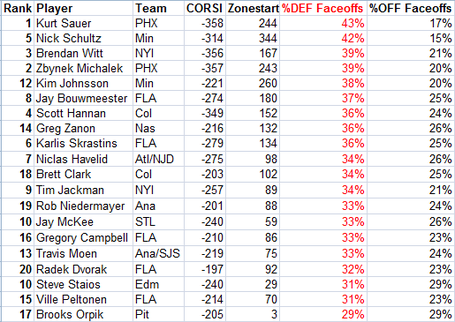 Want to know why Kurt Sauer had the worst Corsi in the league?  He was a pack mule. Nick Schultz?  He got to start in the offensive end just over twice a game compared to almost six-and-a-half defensive zone starts per game.  He should have kept a water bottle on top of the net for as much time he started in his own end.  Now, I will grant that time on ice, and qualcomp and qualteam may all be a factor on some of these players as we delve deeper into the numbers.  But let's not leap before we look, huh?

Below is a list of the twenty worst Zonestarts in the league on 2008-2009.  The fellas in red are on the worst Corsi list. 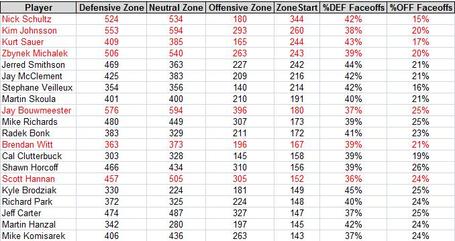 Skrastins, Clark and Zanon are all in the top 40 and in the worst Corsi list.

Show me the 20 worst Corsi values for guys that started in his own zone 30% of the time - those are the guys that, at face value, are in too deep.  Show me the comparable Zoneshift values for the guys in the bottom 20 - who is pushing the puck out of the zone and who is getting stuck there?   Show me qualcomp and qualteam rankings.  Sauer and Michalek are not only buried in their own zone, they are playing the tough minutes as well, this means something.  Corsi is a wonderful stat and it has highly correlative value in the NHL.  It's most valuable without context when it's being used at an aggregate team level, or when used to suss out the differences in similar players.    Lists like these fuel the anti-numbers crowd -- context is necessary in this conversation or the list is useless.

As an aside, without looking, can anyone guess which NHL player had the easiest time of it in 2008-2009 with a Zonestart value of -210?  What about the qualifying player with the lowest percentage of defensive zone faceoffs, 18%,  in 2008-2009?