Brief of The Copper & Blue as Amicus Ludus In Support of Dustin Penner for Playing on the First Line, Part 2.


1.  Introduction
The Edmonton Oilers failed to make the playoffs for the third straight year in 2008-2009.  Craig MacTavish, an ineffective and overmatched coach for the entire season, unfairly used Dustin Penner as a scapegoat throughout the year.  Because MacTavish was outcoached by virtually the entire league, Penner was made to suffer, when in fact, he should have been on the first line for the entire season, playing with Shawn Horcoff and Ales Hemsky.  Three seperate sets of statistics confirm the above argument.

3.  Power Play
Power Play statistics have not traditionally been separated from even-strength statistics when analyzing a player. In recent years, more granularity in statistical tracking has allowed the ability to measure players' effectiveness on the power play specifically, against teammates and opponents alike.

Using traditional statistics, Dustin Penner has been the third most productive power play forward for the Edmonton Oilers over the last two seasons as evidenced  by the following chart: 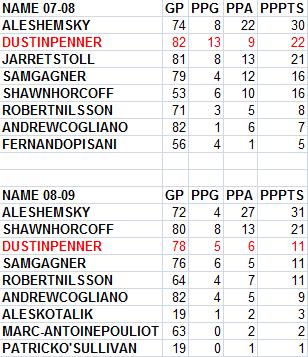 His numbers dipped from 22 points in 07-08 to 11 points in 08-09, or a fall off of 50%.  Penner is second on the team in games played over that span, so there is the possibility that he is not as productive as initially indicated, or that the 07-08 season is an aberration.  We can check Penner's productivity against the team's productivity by using microstats.  We can check the details around Penner's performance on the ice with a man advantage by breaking the numbers down into time on the ice per player.  In this case, the useful stat is Goals For On the Ice per 60 minutes played.

In this case, we can see that even though Penner's traditional stats were down, Penner outpaced all other forwards for the Edmonton Oilers and the power play was most productive when he was on the ice.  The team was only 4% less effective with Penner on the ice in 08-09 as compared to 07-08. Comparing Penner's GFON/60 % change to the other power play regulars:

Even though Nilsson and Cogliano have a marked improvement year-over-year, they still lag far behind Penner in this category.  Looking at PPGFON/60 as a % of Dustin Penner's production provides a more stunning view of Penner's importance to the Oiler's power play:

Only Ales Hemsky gets the same numbers out of his time on the ice with a man advantage.  Sam Gagner is beginning to look like he should be the team's primary option at center.  The rest of the team lags far behind.

The Oilers shift towards a system oriented around a shot from the point is likely the reason for the fall in Penner's traditional numbers.  It might also explain why the team was most effective with Penner on the ice. David Staples, a writer for the Edmonton Journal's Cult Of Hockey blog, wrote a column on Penner's effectiveness on the power play. In it, he details why Penner is so effective:

This year, I've been keeping track of the times that players made good plays that were key to a goal being scored, but they weren't given an official assist for one reason of another. Most of these unofficial assists are handed out to players who make a hit that leads to the goal, or screen the goalie, or make an excellent early pass in the scoring sequence. Dustin Penner leads the Oilers in unofficial assists with 22. Almost all of these have been awarded for the immensely effective manner in which Penner screens the opposition goalie. When he's out there, planting his 6-foot, 4-inches, 245-pounds in front of the goalie, few forces in the hockey universe can move the guy, not even a Chris Pronger crosscheck. He puts on the goalie a total eclipse of the shooter, and that's why the Oilers powerplay has been so effective as a unit when he's on the ice. In fact, the unit has more success with him out there than with any other Oilers player, including Sheldon Souray and Ales Hemsky. No, Penner doesn't get many powerplay goals or assists, but his screening of the goalie is such an effective strategy it loosens things up for every other Oilers shooter. That's a fact.

With a barrage of shots coming from the point, Penner's play in front created many of the scoring opportunities that the Oilers capitalized on.

in 07-08, the Oilers lost Sheldon Souray to injury.  The power play did not focus on shots by defensemen, rather it was a more distributed system amongst the forwards.  Dustin Penner produced 22 power play points and a GFON/60 of 7.13.  In 08-09, in a system where the puck was distributed to the defensemen, Penner's traditional production slumped, but the team was just as effective while he was on the ice due to his play low in the offensive zone.  The versatility shown by Dustin Penner in his ability to operate in both systems wasn't fully taken advantage of during the 08-09 season.  In fact, his power play time was reduced by 25%.  It was a significant mistake.  As evidenced by the numbers above, Dustin Penner should be a fixture on the primary power play unit.