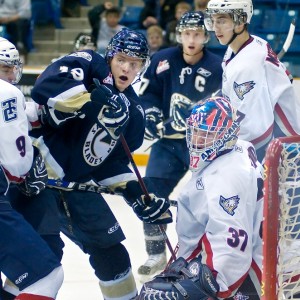 The third part in Copper & Blue’s prospect ranking series takes a look at the players who just missed the top-ten cutoff: #11-#15. A few recent mid- to late-round picks make their debut here after surprisingly good seasons, and they’re joined by a pair of defense prospects who have fallen after poor seasons. Rounding out the group is the Oilers’ highest-ranked goaltending prospect.

As before, we maintain the same format, with the "Seal Value" being the best case scenario. Derek Zona has done up the profiles on the odd number players, while I have reviewed even-numbered ones.

Strengths: Excellent playmaker, but it's his defensive ability that sets him apart. He's reliable in his own end and strong in the faceoff circle. He is quick to learn and adapt.

Weaknesses: He's not strong on the puck and doesn't have "sandpaper".

Seal Value: Plays at a .7 PPG rate in the AHL as a 20-year-old and learns how to play professional defense. He becomes the little center that everyone fears, exactly like Michael Peca did.

Strengths: He’s big. At nearly 6’6", Dubnyk takes up a ton of net. He’s gotten better at reading the play and is solid positionally. Has off-ice smarts too, as he was named the 2004 CHL Scholastic Player of the Year.

Weaknesses: Dubnyk’s put pretty pedestrian numbers up over the past few years, although it’s fair to wonder how much of that was the team he was playing on. He’s still wildly inconsistent, with high highs and low lows, and his lateral movement really isn’t all that it could be.

Seal Value: If Dubnyk puts it all together – and absolutely everything goes right, he could be an NHL starter for years, much like… Olaf Kolzig.

Weaknesses: Sloppy in his own end, he played second toughs in the AHL this year, and didn't tread water, though his second half was slightly improved. Not physical, he must rely on position to be an effective defender.

Seal Value: His offensive prowess and skating ability allow him to pair up with a stay-at-home partner and fans end up shaking their heads repeatedly exactly like when they watched...Tom Poti.

Strengths: Cornet’s a skilled puck-mover (led Rimouski in scoring) and has good on-ice vision and awareness. He plays through pain – as one example, early in the year he broke his thumb and was supposed to be out for a month but he played in his team’s next game, two days later.

Weaknesses: Cornet’s not tiny (5’11.5", 173lbs) but he isn’t big either and he can get out-muscled on the play. He’s gritty but doesn’t initiate contact enough, and his skating still needs improvement. His shot is OK but could be better.

Seal Value: Cornet’s skill-set sounds a lot like that of another young forward who needed to improve his skating. If Cornet can make the same leap that… Joe Pavelski did, he could have a similar career.

Strengths: He's big -- 6'3" 200 and will probably add 10 more pounds. He's mobile and is able to use the wheels on offense and defense. He isn't afraid to work the corners and the front of the net, and likes the big, sometimes questionable hit. He's got a good first step and finds the exit pass well. He has a good shot and can play the power play as well as the penalty kill.

Weaknesses: He played 30 minutes a night on a really, really bad team. His numbers fell apart in both ends of the ice.

Seal Value: This past year is a blip on the radar. Petry spends half a season in the AHL and leaps into the NHL, eating it up like a young...Ed Jovanovski.