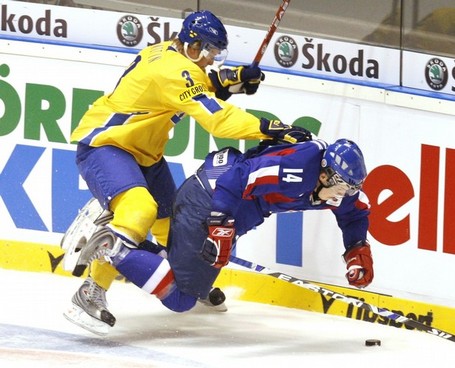 The second part of Copper & Blue's top-25 prospect rankings takes a look at the lower half of the Oilers' top-twenty.  It features a couple of long in the tooth AHL prospects and some more recent but lower round draft picks with significant red flags that they'll need to overcome.
As before, we evaluate the players using a format of strengths, weaknesses, and 'Seal' value - the best case scenario, if everything works out right (reference here).

Strengths: Motin boasts good size and strength, and although he’s somewhat inconsistent taking the body he can also play the game mean.

Weaknesses: Skating ability isn’t a glaring weakness, but it isn’t nearly good enough to be called a strength either. On top of that, Motin has close to zero offensive ability and will always be a stay-at-home defenseman.

Seal Value: Motin could develop into a decent shut-down defenseman, particularly on the bottom pairing of an NHL team, just like… Aki Berg

Strengths: Has very good offensive instincts, particularly on the powerplay. He fires crisp passes and has an occasionally excellent shot, plus when he’s on his game he can be an effective forechecker.

Weaknesses: He’s worked hard, but remains a poor skater. Additionally, he isn’t very aware defensively and both his commitment level and intensity flag.

Seal Value: If he puts it all together, Schremp could end up as a second-line and powerplay forward playing a sheltered role, much like… Mark Parrish

Weaknesses: Extremely small, he's listed at 5'9" but he's likely 5'6". He's listed at 163 lbs, but is playing around 150. He's a perimeter player that gets overwhelmed in traffic.

Seal Value: He learns to think the game at a high level to overcome his size deficiencies, avoids injuries and blows the doors off of the league like..Paul Kariya

Strengths: Roy is a competitive and focused goaltender who also boasts great athleticisim and reflexes. He also telescopes out of the net well to challenge shooters.

Weaknesses: A smaller goaltender (just 6’) Roy struggles to play more of a stand-up style and often commits to butterfly too early. There are also concerns about his ability to handle traffic in his crease.

Seal Value: If Roy can modify his game to be more of a hybrid goaltender, he has a good chance at a decent starting career similar to… Jocelyn Thibault

Strengths: He's willing to do the dirty work in all ends of the ice. He's strong on his skates and stout for his size. He hits hard and willing to drop the gloves and can score once in awhile.

Seal Value: He gets his big break on a team that needs some bottom six smash and turns it into a decade-long career a la...Jamal Mayers