Share All sharing options for: Rem Murray Signs In Italy 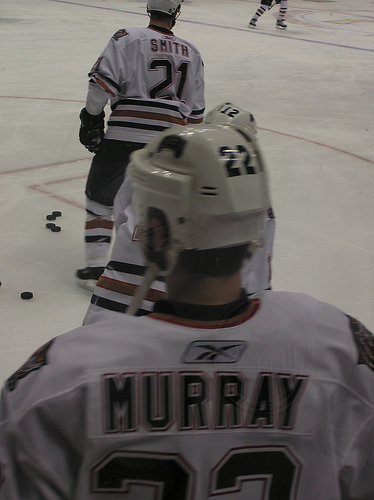 Rem Murray's one of two guys in this photo who have always personified the Edmonton Oilers to me.  He was never an overly-skilled guy, but he made the most of his modest talents.  His love for the game is also undeniable, something that he proved beyond doubt when he was diagnosed with cervical dystonia.  I'll let USA Today explain:

Murray, 33, didn't skate for a year as he explored his treatment options. Eventually, Botox injections provided the best relief. He received a $1 million disability insurance payment because doctors thought his career was over.

But last summer he began to feel good enough to wonder if he could play.

"I remember saying to him, 'Are you sure you want to do this? Because it's going to cost you money to play in the NHL,' " agent Tom Laidlaw says. "But he said, 'I just want to play again.' "

Every dollar he earns must go to the insurance company until he pays back the $1 million. In addition, Murray must still pay his taxes on earnings, which means it costs him money out of his pocket to play for the Oilers this season. At $450,000 a year, he would have to go three seasons to stop losing money.

Murray's played for four seasons since his return; one with Houston of the AHL and the Oilers (the 2006 Cup run), two with HIFK Helsinki, and one with Innsbruk EV in Austria. He's been an impact player over in Europe, and now he's signed on for a fifth season with an Italian team (the Val Pusteria Wolves). He'll be 37 this season, and I hope he squeezes every drop out of his hockey career. He's also one of the few "old boys' club" additions that I'd be fine with, once his playing career is over.