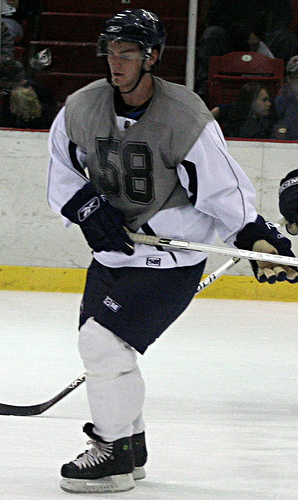 The addition of new writers has neccessitated some other changes to this website.  Among them, the prospect rankings are now a shared project between myself and Derek Zona, and so we've decided to put out a new list based on our combined rankings.

This list has a few changes from the old top-thirty, among them a new format.  We include the strengths, weaknesses, and one of Derek's favorites - a "seal value".  The seal value represents the best case scenario, the ceiling, for the players listed here.  Odd-numbered profiles were done by Derek, even-numbered ones by me.

Strengths: Trukhno has an high level of skill, combining outstanding stick-handling, hands and speed. He has the always-desired sandpaper element to his game and isn't afraid to throw his body around. He is also effective in his own zone and on the forecheck when needed.

Weaknesses: He doesn't seem to have any weaknesses on the surface, but he never delivers on all of that talent. It could be that he's dying on the vine in the wasteland that has been Springfield, or there is something more going on with his work ethic.

Strengths: The first thing that jumps out is his size (6’5", 235lbs). He’s physical, and has been a dominant player in the BCHL.

Weaknesses: He could be a late-bloomer, but the fact that Bigos is 20 years old and is coming out of such a weak league does not bode well for his professional career.

Seal Value: These kind of guys are hard to project, but if Bigos keeps developing along his current path, he could have a lengthy NHL career ala… Murray Baron

Strengths: He's a high school kid playing weak competition, so his strengths are purely physical - he has good size and footspeed.

Weaknesses: Has not played high level hockey, he's extremely light. He has a long way to go to have a chance.

Seal Value: A couple of years in a solid college program and he has a long, quiet career like...Tom Kurvers

Strengths: McDonald’s a big body, and he has a hard shot. This past season, he played well against top-level competition in Springfield and showed his first glimmer of real offensive ability under Rob Daum.

Weaknesses: McDonald isn’t overly physical for his size, his offensive game came out of nowhere after a year and a half of non-existence at the professional level. He’ll be 25 at training camp.

Seal Value: If his offense is for real, he gets an NHL cameo next season and could become… Brad Winchester

Weaknesses: Not an all-zones player, not hard on the puck and doesn't do the tough work. He's shown no interest in playing in North America.

Seal Value: He develops his game, stays in Russia and grows into the very similar...Aleksey Morozov

Strengths: "Power forward" is an overused term, but with Mikhnov it fits. He combines good hands with size and a willingness to use it.

Weaknesses: Is not a complete player defensively and isn’t exactly fleet of foot either; on top of that, the 26-year old is almost certain to remain in Russia unless he gets a one-way contract

Seal Value: It might not even take much development on his part; if Mikhnov were willing to play in North America he might be… Oleg Kvasha